Protesters have taken to the streets of Tunisia’s capital in a rare show of public dissent towards President Kais Saied’s move to seize extra powers.

Thousands of people rallied in the centre of Tunis on Saturday chanting: “Shut down the coup,” and “We want a return to legitimacy.” Saied supporters held a counter-demonstration chanting: “The people want to dissolve Parliament.”

The protest, which was met by a heavy police presence on Habib Bourguiba Avenue, was the first major demonstration since Saied declared on July 25 he was sacking the prime minister, suspending Parliament and assuming executive authority – moves his opponents branded a coup.

The former constitutional law professor justified his move by citing emergency measures in the constitution, but his critics and many legal scholars say these clauses do not support such an intervention.

Last week, one of Saied’s advisers told the Reuters news agency the president was planning to suspend the constitution and offer an amended version via a referendum, prompting opposition from political parties and the powerful UGTT labour union.

Political leaders have complained about the constitution since it was agreed in 2014, calling for it to be changed to either a more directly presidential or more directly parliamentary system.

Anxiety has been growing, both internally and among Western democracies, that Tunisia may lose the new rights and the democratic system won in the 2011 revolution that sparked the Arab Spring.

Eight weeks on, Saied is still to appoint a prime minister. He has rejected accusations of a coup and presented his moves as an opportunity to purge a corrupt elite.

While they triggered a constitutional crisis and prompted accusations of a coup, Saied’s moves were broadly popular in a country suffering from economic stagnation and political paralysis. 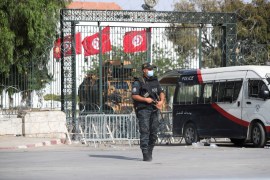 Chawki Tabib says he was informed by a police patrol outside his home that he was now under house arrest. 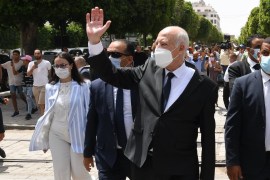 Saied also extended the suspension of immunity of members of parliament a month after he dismissed prime minister. 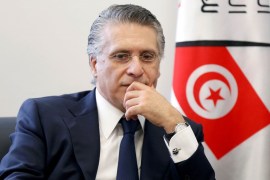 The announcement comes a day after Nabil Karoui and his brother were reportedly arrested in Algeria.