For centuries, the bear has been Russia’s totem animal.

It is also a mascot of United Russia, the governing party in the State Duma, the 450-seat lower house of parliament, that obediently and unanimously stands behind everything President Vladimir Putin says and does.

United Russia currently has a supermajority with 334 seats, which means a very prompt adoption and approval of any bill, budget and political step Putin wants.

But independent observers, international monitors and Western governments do not believe the majority was the result of fair election victories – and consider most parliamentary votes under Putin’s rule to be rigged.

Just like a bear, United Russia, which largely consists of officials and businessmen, is far from gracious.

In fact, it is so unpopular and politically clumsy that Putin has for years distanced himself from it.

Jailed opposition leader Alexey Navalny has called United Russia “a party of crooks and thieves”, and despite all the efforts of Kremlin-controlled television networks, its current approval rating stands at just 27 percent, according to a survey conducted in March by the Levada Center polling organisation.

Putin then appointed his immensely popular defence chief and possible successor Sergey Shoigu to lead the party in the three-day parliamentary vote, which concludes on September 19.

Putin needs United Russia to win – because after last year’s “nullification” of his current and previous presidential terms, he needs another parliament supermajority awaiting his re-election in 2024.

How does the vote work?

Half of the Duma’s seats are filled by direct election.

But each voter makes a second choice on their ballots for the second half of the chamber’s seats, as part of a process known as “party lists”.

This means voters will pick from one of 14 parties to send another lawmaker to the Duma.

However, only four of these parties are relevant – United Russia and the so-called “systemic opposition”, a trio of parties critics say are nominally opposed to United Russia and whose purpose is to create an illusion of political plurality.

The biggest and oldest of them is the Communist Party, led by Gennady Zyuganov.

He leads annual marches to the Red Square mausoleum of Soviet founder Vladimir Lenin and idolises his successor, Josef Stalin.

However, the Communists mostly back Putin’s initiatives, and their ageing support base – low-income retirees who are nostalgic about their Communist-era youth – has limits.

The third-largest faction in the Duma is the far-right, nationalist Liberal Democratic Party of Russia (LDPR), which has 40 seats.

Its leader, Vladimir Zhirinovsky, has been accused of anti-Semitism and wanted Moscow to use nuclear weapons against Chechen separatists, “retake” Alaska from the US – the czars sold the remote peninsula in 1867, and annex Finland and Poland, which used to be part of the Russian empire.

His antics are, however, are widely seen by observers as a political smokescreen to lure disgruntled nationalists – and to make Putin appear a balanced, wise patriarch.

The third and the least significant “systemic” party is A Just Russia – a nominally socialist party that promises to nationalise Russia’s oil industry and triple the salaries of government employees – which has 23 seats in the Duma.

Even though its leader Sergey Mironov is a longtime Putin ally, the party has an approval rating of 7.8 percent, according to a poll conducted in February by the state-run VTsIOM pollster.

In an attempt to attract voters, A Just Russia merged this year with Patriots for Truth, a nascent nationalist group led by Zakhar Prilepin, a novelist-turned strongman who led a squad of pro-Moscow separatists in southeastern Ukraine and confessed to killing “lots and lots of people”.

Thousands marched in the capital, Minsk, for weeks to protest his sixth victory in an August 9, 2020, presidential vote.

In response, Belarusian authorities arrested, beat and tortured thousands, according to rights groups.

The Kremlin “purges opposition, especially after Minsk, to make sure such a scenario is not repeated in Russia,” Vitali Shkliarov told Al Jazeera.

“In order not to beget protest and discontent, [the Kremlin] is making the vote sterile, and that’s why they’re using the only two remaining mechanisms – vote rigging or barring [opposition candidates],” he said.

Barred from the vote this year are Navalny and his supporters, as well as hundreds of other independent candidates throughout Russia who have been subject to arrests, intimidation and smear campaigns.

As to vote-rigging, in Russia, ballot stuffing was documented tens of thousands of times before the Kremlin outlawed most independent election monitors.

“Carousels”, when groups of voters are bussed from one polling station to another, voting dozens of times, are also a common feature.

This year, millions of Russians will use an e-voting system that critics claim is non-transparent and easy to manipulate but Moscow says will boost turnout, and the speed and accuracy of processing votes.

“Our school’s principal said we have to get registered, vote for United Russia or face dismissal,” Oleg Pritulin, an English teacher at a public school in southeastern Moscow, told Al Jazeera.

After the principal’s order, he considered quitting the job – his second source of income on top of work as a translator – because he “doesn’t want to be part of this cruel farce”.

Most of his colleagues, however, fully depend on their teaching paychecks and the extra income provided by tutoring.

According to Kyiv-based analyst Aleksey Kushch, the Russian election is like a “tasteless breakfast at a summer camp for young pioneers, without any choice”. 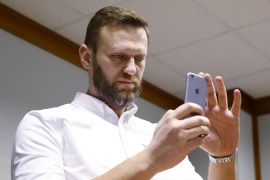 Opposition figure’s tactical voting app aims to eke out United Russia candidates, but some say it is politically flawed. 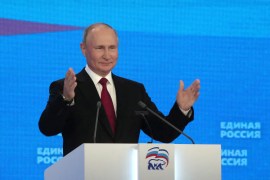 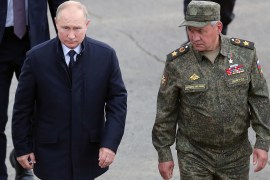 Putin is still pondering the idea of another term, but as he approaches 70, bets are being placed on Sergey Shoigu.