Tensions have risen dramatically on the Korean Peninsula in recent days after North and South Korea tested a series of ballistic missiles.

A brief history of the two Koreas

After the defeat of the Japanese empire in World War II, the United States and the Soviet Union divided the Korean Peninsula, previously under Japanese rule.

In 1950, North Korean forces, backed by China and the Soviet Union, invaded the South, triggering the start of the Korean War. Allied with the South, the US deployed some 1.78 million troops over the three-year-long war. ​​

An armistice was agreed but no formal peace treaty was signed.

Both Koreas have steadily increased their military spending over time.

North Korea has the fourth largest military in the world with some 1.28 million active personnel, according to the International Institute for Strategic Studies.

According to the US State Department, North Korea, a country of 25.8 million people, spends nearly a quarter of its gross domestic product (GDP) on its military – more than any other country in the world.

South Korea’s military is nearly 600,000 strong, about half the size of the North.

However, it also hosts some 26,400 American troops in at least 73 bases across the country.

Camp Humphreys, the largest overseas US military base, is located approximately 100km (60 miles) from the heavily fortified Demilitarised Zone (DMZ) that divides the two Koreas.

As part of the Special Measures Agreement (SMA), the South Korean government pays $1bn annually to receive US military support.

Since 1984, North Korea has carried out more than 150 missile tests, according to the Center for Strategic and International Studies (CSIS).

These range from short-range missiles (SRBMs) – those with a range of less than 1,000km (620 miles) – to intercontinental ballistic missiles (ICBMs) – with a minimum range of 5,500 km (3,400 miles), usually used to carry nuclear weapons.

More than half of these tests have been in the past 10 years under the leadership of Kim Jong Un who inherited power following his father’s death in 2011.

The 37-year-old has threatened to continue to build high-tech weapons targeting the US and rejected the Biden administration’s call for dialogue, demanding that Washington abandon its “hostile” policies first.

In May, the Biden administration announced a new approach to North Korea, saying it was still pursuing denuclearisation but that it was not prepared to offer any “grand bargain” to Pyongyang.

North Korea’s ballistic missile range has gradually increased over the years. In November 2017, it test-fired the Hwasong-15 ICBM, which has an estimated range of 12,874km (8,000 miles) and can reach anywhere in the continental US. 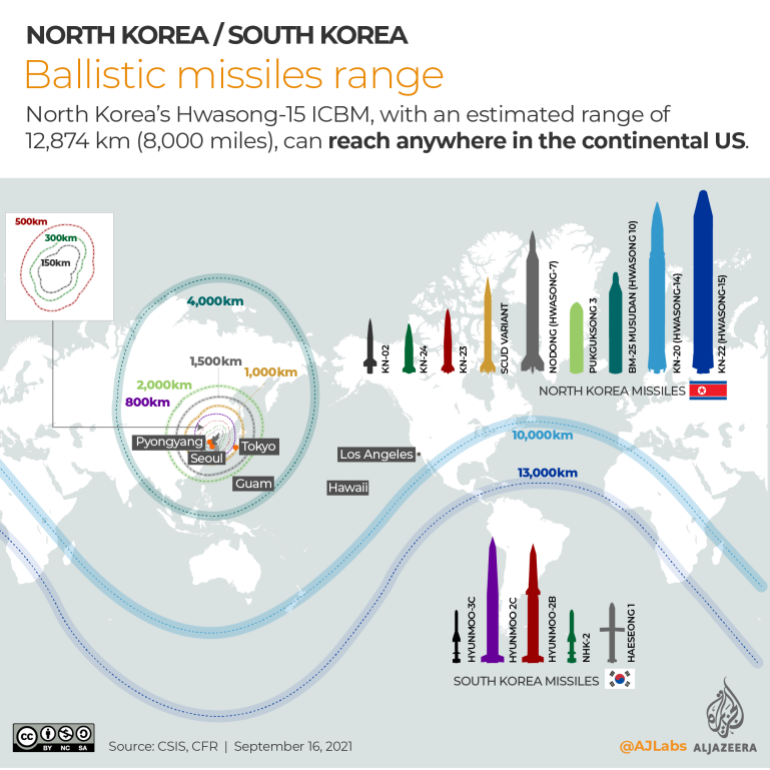 In 2003, North Korea withdrew from the Nuclear Proliferation Treaty – an international agreement by the UN to prevent the spread of nuclear weapons and weapons technology.

Three years later, under the leadership of Kim Jong Il, the country detonated its first nuclear weapon at the Punggye-ri nuclear underground test site deep in the mountains of the North’s sparsely populated northeast.

Most recently, in September 2017, it is believed to have tested a 140+ kilotonne hydrogen bomb – a significantly more powerful type of atomic bomb.

In August 2021, the International Atomic Energy Agency (IAEA) said that it believed that North Korea had restarted a nuclear reactor used to produce plutonium for atomic weapons. The IAEA has had no access to North Korea since Pyongyang expelled its inspectors in 2009.

The North is under multiple international sanctions over its banned nuclear weapons and ballistic missile programmes.

The US Army estimates that North Korea is estimated to have between 20 to 60 nuclear weapons. 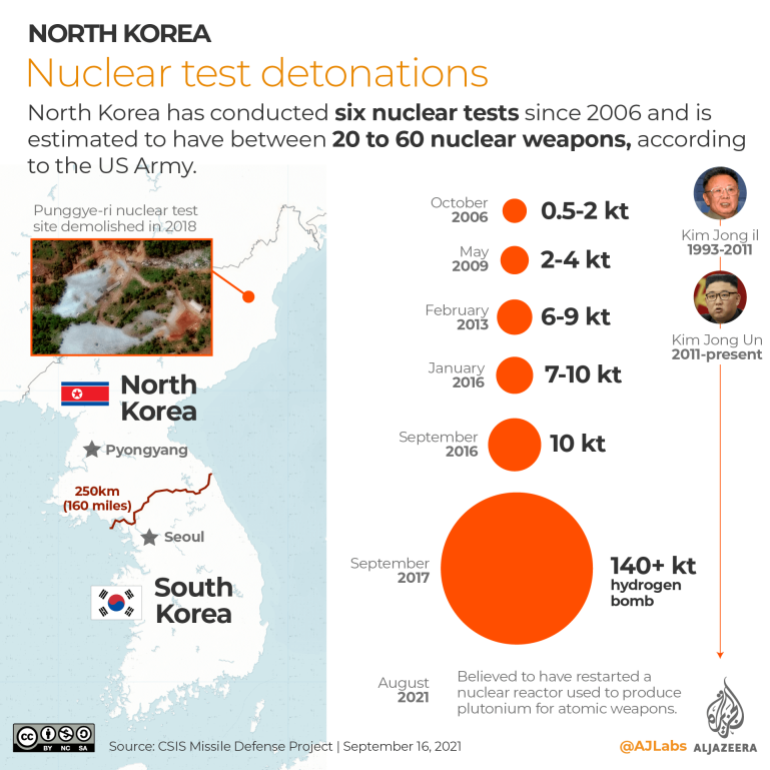