Brampton, Ontario, Canada – After Canada’s Prime Minister Justin Trudeau called a snap election last month, he defended the decision to hold a vote during the coronavirus pandemic by saying Canadians needed to choose “how we finish the fight against COVID-19”.

But in Ontario’s Peel region – a sprawling area west of Toronto that is home to 1.5 million people and was one of the parts of the country hardest-hit by the virus – the electorate has shown little enthusiasm for going out to vote.

“I think it was a really dumb idea,” Brampton resident Pam Bates told Al Jazeera before Election Day on September 20.

The 55-year-old, who is on disability, said her eye surgery had been delayed several times since the pandemic began as local hospitals became overwhelmed with COVID-19 patients. She added that she fears election-related events could contribute to coronavirus infections.

“I can’t find any reason on the news why he (Trudeau) needs to seek another mandate right now. Does he think people have lost faith in him?” she said, adding that she does not plan to cast a ballot. “I don’t trust any one of them to do what’s needed.”

According to recent polls, calling an election two years early may end up backfiring for Trudeau, as his Liberal Party faces a tough challenge from the Conservatives, headed by Erin O’Toole. The two parties, which have dominated Canadian federal politics for decades, are in a neck-and-neck race.

Trudeau triggered the vote in hopes that his government’s ability to successfully inoculate a majority of Canadians against COVID-19 and provide economic stimulus measures and other employment supports would give the Liberals a parliamentary majority.

But despite Canada boasting one of the highest vaccination rates in the world per capita, with more than 78 percent of eligible people fully vaccinated to date, many Canadians appear frustrated by having to go vote.

“One of the challenges that has bedeviled the Liberal campaign is that they haven’t provided a more compelling reason for calling an election,” Max Cameron, a political scientist at the University of British Columbia, told Al Jazeera about the Liberals.

“What [Trudeau] was hoping for [was] that the successful rollout of the vaccine would benefit him and that Canadians would say that he has done a good job, but you don’t want to politicise this pandemic – and that is precisely what he has done by calling the election.”

Jaskaran Sandhu, a Brampton-based political strategist with the firm State Strategy, said calling an election in the middle of a pandemic sent a “mixed message” to people. “We have been asking Canadians for the last year and a half, stay home, take precautions, don’t do things you don’t need to be doing, essential stuff only – and here we are calling an election,” he told Al Jazeera.

The campaign was called amid concerns Canada was entering a fourth wave of the pandemic.

Earlier this month, the Public Health Agency of Canada said the country was seeing a “rapid acceleration” of COVID-19, including a rise in severe illness caused by the virus. Canada has recorded more than 1.56 million cases and more than 27,300 deaths, according to Johns Hopkins University data.

In the Peel region specifically, cases also have steadily increased in recent months.

According to the Toronto-based research group ICES, between August 29 and September 4, Peel had the sixth-highest positivity rate – 4.46 percent – (excluding long-term homecare residents) out of 34 public health regions in Ontario, Canada’s most populous province. The provincial average in that same period was 3.36 percent.

The region has reported more than 114,000 cases since the pandemic began, with over 960 deaths.

Mary, a support services worker at Brampton Civic Hospital who did not want to give Al Jazeera her full name in order to speak freely, said the COVID-19 situation in the city felt “very real and in your face” during the first three waves.

“We were consistently under pressure, non-stop, one [wave] after another,” she told Al Jazeera.

“I never experienced SARS but we spoke to colleagues who worked here during the SARS epidemic and said this [COVID-19 outbreak] was by far worse,” Mary said, noting people needed to see the situation themselves in hospitals to “really understand” what front-line health workers went through. “They didn’t experience what we experienced. We lost co-workers.”

Dr Naheed Dosani, who worked in Peel during the pandemic, told Al Jazeera that what the region has experienced during the COVID-19 pandemic is directly connected to longstanding inequality issues there.

More than 62 percent of Peel residents are from a visible minority group, according to Canada’s 2016 Census, while 51 percent are immigrants. Many residents also work in front-line jobs deemed essential during the pandemic, including as warehouse workers and delivery truck drivers. In Brampton, approximately 14 percent of households are multi-generational, according to 2016 Census data – a situation that some experts have said could fuel COVID-19 infections.

Additionally, the region “has one of the lowest hospital-bed ratios in all of Ontario,” Dosani told Al Jazeera. “There are many racialised people who don’t have the healthcare support they need.”

The Financial Accountability Office of Ontario in 2020 reported that Brampton had 0.92 beds for every 1,000 residents, less than the Canadian average of 2.5. In Mississauga, there were 1.6 beds per 1,000 residents.

“A lot of the work that needed to be provided especially around COVID-19 education, and eventually vaccine education, required resources to support things like instructions in different languages, meeting with community leaders … going door-to-door, business-to-business – that really roll up your sleeve type of work,” Dosani said.

“Unfortunately, the resources were not always provided to the Region of Peel.”

And while COVID-related issues remain a top concern across the country, Peel residents like Zaid Mahboubullah say an election now feels “inappropriate” – particularly, he said, when so many “have died and families have been ripped apart” in his hometown of Brampton.

“As a community, we did not have the chance to properly grieve these losses or even assess the damage [the pandemic] caused,” the 23-year old York University student told Al Jazeera.

Nevertheless, some people say they hope Canada’s political parties will use the lessons of Peel to develop policies that will benefit local residents, including many who remain on the front lines of the ongoing pandemic.

“More should be done to ensure that workers are protected … especially gig workers, precarious workers – folks that were exposed to COVID to a greater degree,” said Sandhu, the political strategist.

He added that the parties should guarantee more paid sick days – a key demand put forward by workers’ rights advocates across Canada over the past year and a half – and expand unemployment benefits.

The Liberals and New Democrats have pledged to provide 10 paid sick days for federal workers if elected, while the parties along with the Conservatives also have promised to expand eligibility for employment insurance, a federal programme.

For his part, Dosani said it is essential for all the parties to have a “robust” communication plan around COVID-19 vaccines, especially amid anti-vaccine sentiment in Canada. But, he said, “the biggest thing for the people in Peel is that they were forgotten once, and I hope that whatever government comes into power, they are not forgotten again”.

“Every government has a duty to keep the people of Peel safe and healthy.” 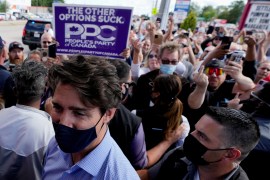 ‘What next?’: Experts in Canada alarmed by anti-Trudeau protests 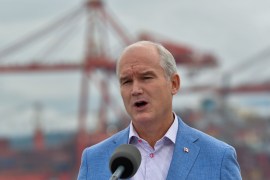 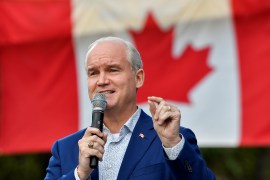 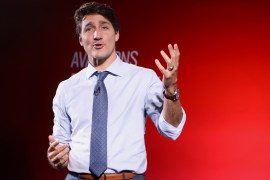