A federal grand jury indicted Derek Chauvin, Thomas Lane, J Kueng and Tou Thao in May for allegedly depriving Floyd of his rights while acting under government authority.

Floyd, 46, an unarmed Black man, handcuffed and not resisting, was held face-down by the four officers while Chauvin placed his knee on Floyd’s neck, choking him. The May 25, 2020 incident was captured on bystander video. Floyd’s death led to worldwide protests and calls for changes in policing in the US.

All four of the men appeared at the hearing remotely via videoconference on Tuesday. Chauvin appeared from a room in the state’s maximum-security prison, where he is serving a 22.5-year sentence for murder in Floyd’s death. The other three men appeared remotely alongside their lawyers.

Chauvin was convicted of second-degree unintentional murder and manslaughter in a state trial and was sentenced to 22.5 years in prison. In Tuesday’s hearing, he and the other three officers face separate federal charges.

The federal indictment alleges Chauvin violated Floyd’s right to be free from unreasonable seizure and unreasonable force by a police officer.

Thao and Kueng are charged with violating Floyd’s right to be free from unreasonable seizure by not intervening to stop Chauvin as he knelt on Floyd’s neck.

All four officers are also charged with depriving Floyd of his rights when they failed to provide him with medical care.

Lane, Kueng and Thao have asked that their federal civil rights trial be separated from Chauvin’s on grounds any jury would be unfairly prejudiced against them if they went to trial alongside him. US prosecutors have asked the court to conduct one trial for all four.

During Floyd’s arrest, he repeatedly said he could not breathe as Chauvin pinned him to the ground. Kueng and Lane helped restrain Floyd; Kueng knelt on Floyd’s back, and Lane held Floyd’s legs, according to evidence in state court.

Thao held back bystanders and kept them from intervening during the more-than-nine-minute restraint.

US Attorney General Merrick Garland, the US’s top law enforcement official, announced on September 14 that the Department of Justice would seek to improve its oversight of local police departments following criticism and pushback from police leaders that federal oversight has been ineffective.

At the same time, Minneapolis police have been backing off arrests, according to a study of public data by the Reuters news service. Almost immediately after Floyd’s death, Minneapolis police officers all but stopped making traffic stops and approached fewer people they considered suspicious for fear an encounter could become another flashpoint.

The US Justice Department on Tuesday announced it was curtailing the FBI and other federal law enforcement agencies from using chokeholds to restrain suspects or executing no-knock warrants at homes before entering.

Breonna Taylor, a Black woman, was shot dead in her apartment in Louisville, Kentucky in March 2020, by police officers serving a no-knock warrant. She had been sleeping at the time.

The Department of Justice is also conducting reviews of police departments in Phoenix, Arizona, and Louisville following high profile deaths of Taylor and other citizens at the hands of the police. 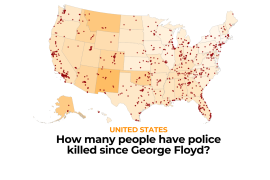 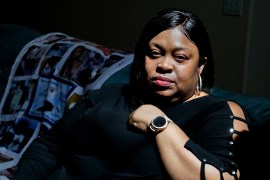 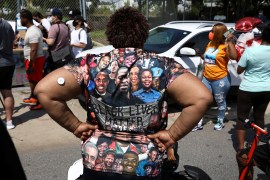 Security cameras show Florida officers kicking a handcuffed man then attacking another man who was recording the arrest. 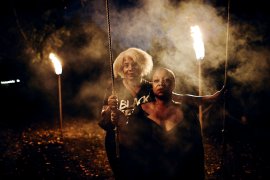 Continuing the fight for US police reform

The Take revisits a story about a song that has become the musical beacon for the Cariol’s Law legislation.