President Joe Biden is heading to California to drum up political support in the largest US state, hit by devastating wildfires, for the Democrat’s massive spending plans that include measures to combat climate change.

More than 6,800 wildfires large and small have blackened an estimated 689,000 hectares (1.7 million acres) within California alone this season. The blazes have been stoked by extremely hot, dry conditions and chronic drought that experts have said are a consequence of climate change.

The US Congress is advancing two major spending bills – a $1 trillion infrastructure investment and a $3.5 trillion budget package that include major provisions to cut carbon emissions and shift the US to clean energy. But Biden faces Republican opposition and he needs all the support he can get from Democrats to win passage of both measures.

“Climate change poses an existential threat to our lives, to our economy,” Biden warned the American public last week during a visit to New York after flooding and high winds from a powerful Atlantic Hurricane Ida killed 91 people in 10 states.

“The threat is here. It’s not going to get any better. The question: Can it get worse? We can stop it from getting worse?” Biden said.

Biden has approved a disaster declaration for California allowing more federal support for the state and will give remarks in Sacramento, the state’s capital, after touring the damage caused by the Caldor Fire.

Burning since mid-August the Caldor Fire is 67 percent contained and has injured five people and destroyed more than 1,000 buildings and homes.

The larger, Dixie Fire, which appeared set to become the state’s largest single fire ever, has been burning since July 14, and has spread across five counties, burning 388,633 hectares (960,335 acres) and is 67 percent contained according to CAL FIRE. Across California fires have burned more than 890,308 hectares (2.2 million acres) so far in this fire season.

Biden will promote his administration’s rare use of the Defense Production Act used to boost supplies of 415 miles (668km) of fire hoses for the US Park Service to help fight the western fires.

Biden on Monday is to first visit the US’s National Interagency Fire Center in Boise, Idaho, where authorities are managing a massive battle against hundreds of wildfires burning throughout western North American from California to Canada.

Biden is scheduled to join Governor Newsom at an election-eve campaign rally in Long Beach, California, on Monday, seeking to boost voter turnout in opposition to the Republican-led drive to recall Newsom. Polls suggest Newsom will likely stay in office, but the recall has emboldened Republicans.

The White House is trying to turn the corner after a difficult month consumed by a chaotic and violent US withdrawal from Afghanistan and the surging Delta variant the COVID-19 virus with hospitalisations and deaths spiking in the United States.

Polls suggest Americans’ approval of Biden has slipped in recent weeks with the numbers of voters who disapprove of how he is handling his job now outweighing those who approve for the first time since the November 2020 election, according an average of surveys tallied by RealClearPolitics.

During the weekend, Biden acknowledged that his polling numbers have fallen, but argued his agenda is “overwhelmingly popular” with Americans. He said he expected his Republican opponents will seek to attack him instead of debating him on the merits of his plans.

“You’re going to see — and I get it — a lot more direct attacks on me, not what I’m for,” Biden told reporters on Saturday.

In addition to Republican opposition, Biden needs to overcome the scepticism of two key centrist Democrats in the evenly divided US Senate.

Democrats Joe Manchin of West Virginia and Kyrsten Sinema of Arizona have expressed concerns about the size of the $3.5 trillion spending package. Biden needs “yes” votes from both to win approval of his plans.

The climate provisions in Biden’s budget include tax incentives for clean energy and electric vehicles, investments to transition the economy away from fossil fuels and towards renewable sources such as wind and solar power, and the creation of a civilian climate corps. 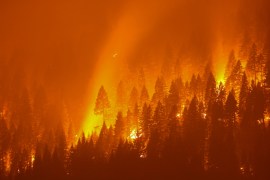 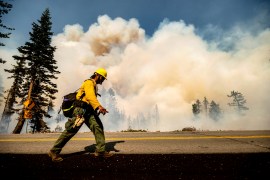 Houses reduced to smouldering ash and twisted metal with only chimneys rising above the ruins. 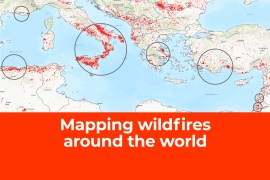 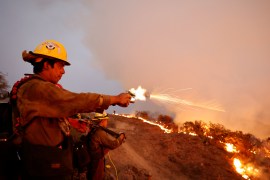 The Caldor Fire in California and Greenwood Lake Fire in Minnesota are fueled by climate change, researchers conclude.