Hurricane Olaf slipped back to tropical storm force on Friday after slamming into the Los Cabos resorts at the tip of Mexico’s Baja California Peninsula and then drenching the region with torrential rains.

The storm came ashore near San Jose del Cabo late on Thursday as a Category 2 hurricane with winds of 155km/h (100mph), according to the US National Hurricane Center.

But winds had dropped to 110km/h (70mph) in the morning, when it was centred about 100 kilometres (65 miles) west of La Paz, the Baja California Sur state capital.

At least 700 residents spent the night in shelters while an estimated 20,000 foreign tourists hunkered down in their hotels.

The storm comes just two weeks after Hurricane Ida, a powerful storm that struck the United States, devastating the state of Louisiana and a handful of eastern states, after moving over western Cuba and the Gulf of Mexico in late August.

At least 50 people died in six US states.

The national electrical company reported that storm Olaf knocked out power to most customers in the state, but it was gradually being restored. Authorities late on Thursday had reported fallen trees and some hotels reported minor damage. Shelters were opened for some evacuations in vulnerable areas.

As the storm came ashore some motorists were stranded inside their cars in high water.

There are no oil installations on Mexico’s Pacific coast but there are tourism destinations.

Officials also closed schools in the area, suspended COVID-19 vaccinations and told many non-essential workers to stay home. Businesses had boarded up windows and people lined up for last-minute purchases in supermarkets ahead of the storm.

The hurricane centre said the storm was expected to head up the western coast of the peninsula during the day and then veer out into the Pacific by night.

More than 500,000 people live in the La Paz-Los Cabos region and Lilzi Orci, president of the Los Cabos Hotels Association, estimated that about 20,000 foreign tourists were in the area despite COVID-19 restrictions that kept hotels to less than 40 percent of capacity.

The hurricane centre forecast 12.5 to 25.5cm (5 to 10 inches) of rain on the southern part of the peninsula, with up to 38cm (15 inches) in isolated spots, creating the danger of flash floods and mudslides. 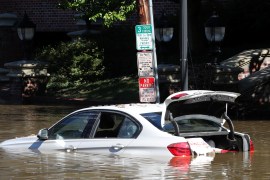 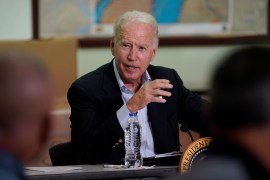 The US President is touring New Jersey and New York after the violent storm devastated the two states with flooding. 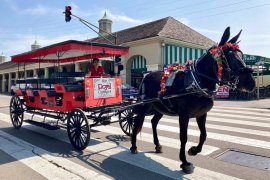