Canada’s governing Liberal Party has pledged billions of dollars in new investments weeks before a federal election, as the party seeks to garner support amid a tight race and recent gains by the rival Conservatives.

The investments would be partially offset by more than 25 billion Canadian dollars ($19.8bn) in new revenue, mostly from a higher tax on profits of banks and insurers and fighting tax evasion, the party said.

“We have a plan to move forward for everyone on health, on housing, on child care, on climate,” Trudeau said during Tuesday’s unveiling of the plan, dubbed Forward For Everyone.

The new investments – to be spread out across five years, from 2021 to 2026 – are in addition to the 101 billion Canadian dollars ($81bn) in extra spending across three years passed in a budget earlier this year.

The Liberals spent heavily on programmes to shield citizens and businesses from the COVID-19 pandemic, driving the national debt and budget deficits to record highs. Trudeau sidestepped repeated questions as to when the budget might be balanced.

Trudeau on August 15 triggered a snap election two years ahead of schedule in a bid to return the Liberals to a majority government, after the party was relegated to a 157-seat minority government in the last vote in 2019.

But recent polling shows a tight race in advance of the September 20 vote, with the Conservative Party of Canada led by Erin O’Toole holding 33.8 percent support, compared with 31.2 percent for the Liberals, according to CBC’s Poll Tracker, which aggregates publicly available election poll data.

Trudeau has faced angry protests on the campaign trail and was forced to cancel an event in the province of Ontario last Friday over safety concerns after a crowd of anti-vaccine and anti-masking demonstrators turned up.

Irate demonstrators also rallied at a second Trudeau campaign event in Ontario during the weekend, “shouting obscenities, uttering death threats against the prime minister and hurling racist and misogynist insults at people of colour and women in his protective detail”, CBC News reported.

Kyle Seeback, a Conservative Party candidate, said some of his supporters attended the protests and were “no longer welcome” on his campaign.

On Tuesday, the Conservatives hit out at the Liberals’ election platform, with Dan Robertson, chief of strategy for O’Toole, saying on Twitter that it was “more borrowing, more debt, higher taxes, and rising prices”.

O’Toole has also put forward a big-spending platform, but he said on Tuesday he would balance the budget in 10 years “without cuts” and only by boosting revenues through stronger economic growth. The Conservative Party has yet to detail the costs of its platform.

“If he doesn’t show the numbers, why should Canadians believe him?” Trudeau said of O’Toole’s pledge to balance the budget. 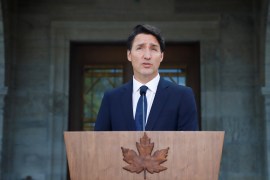 Canadians will go to the polls on September 20, as Justin Trudeau’s Liberals seek a renewed majority in parliament. 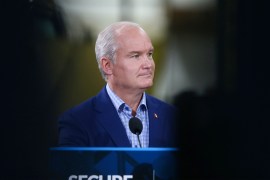 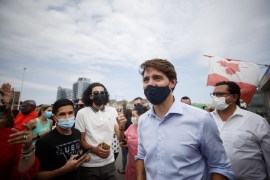 Weakening sentiment among households could undermine what has been a big advantage for Prime Minister Justin Trudeau.