Istanbul, Turkey – Longtime foes Armenia and Turkey have signalled that they are willing to move towards restoring diplomatic relations, almost four decades after borders between the two neighbouring countries were closed.

In mid-August, Armenia’s recently re-elected Prime Minister Nikol Pashinyan said that he was ready for reconciliation with Turkey “without preconditions”, while Turkey’s President Recep Tayyip Erdogan said this past weekend that Ankara could work towards gradual normalisation if Yerevan “declared its readiness to move in this direction”.

Diplomatic relations between the two countries, already haunted by the mass killing of Armenians in the Ottoman Empire during World War I, were severed in 1993 following the first Nagorno-Karabakh war.

Turkey’s military assistance to Azerbaijan in last year’s repeat conflict over the mountainous enclave, as well as US President Joe Biden’s recent recognition of what Armenia and other nations consider a “genocide”, looked set to keep things that way.

However, with Armenia keen to combat its economic and trade isolation and Turkey’s strength as a regional economic powerhouse waning, there are incentives for both sides to work towards thawing old hostilities, even if small.

Experts say that both stand to benefit economically from a move towards normalisation, as well as geopolitically in terms of relations with Azerbaijan and Russia.

As it stands, Armenia has closed borders with two of its four bordering countries, and Turkey has little access to Russia’s Eurasian Economic Union, which encompasses Armenia, Belarus and Kazakhstan.

Richard Giragosian, director of Yerevan-based think tank the Regional Studies Center, said that he expects to see the closed border between the two countries open within a few years.

What has been seen so far is just a preliminary exchange of positive statements.

“The only thing we see on the ground is that Armenia has allowed Turkish Airlines to fly to Baku directly over Armenia. This is important as a gesture as Turkish airspace remains closed to Armenian flights,” he told Al Jazeera.

“Now the burden is on Turkey. Pashinyan’s statements, however unpopular they may be in Armenia, are positive. So now the expectation is on Turkey to make a move.”

Giragosian said that with Turkey in a weakened position due to dips in the strength of the currency and President Erdogan’s popularity, reinforcing ties with Russia, which oversaw last year’s Nagorno-Karabakh ceasefire deal, is also a key goal.

“It’s in Turkey’s interests to use normalisation with Armenia to gain a seat at the table with Russia for post-war regional configuration,” he said. 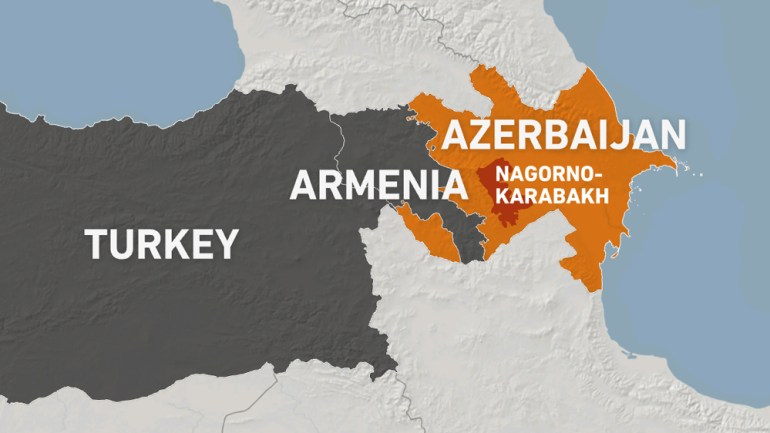 Armenia’s position, however, is based on making the Russian-imposed ceasefire more of a durable peace process.

“Azerbaijan will be required to stop border incursions and release prisoners. With the new Armenian government, this is a geopolitical strategy to divide Turkey from Azerbaijan, to play them off against one another,” Giragosian said.

Last year, Azerbaijan and Armenia fought out a bloody 44-day war over Nagorno-Karabakh, a disputed territory that is recognised as Azerbaijani territory but populated by ethnic Armenians.

More than 6,000 people – mostly soldiers – are thought to have died across the two sides, according to local news reports, with swaths of territory Armenia had seized control of in the first war ceded back to Azerbaijan.

Turkey has strong economic, military, cultural and linguistic ties with Azerbaijan, and assisted Baku during the conflict with sophisticated weaponry such as drones – a significant source of casualties from the Armenian side.

They were also accused of providing Syrian mercenaries on the ground, a claim which Baku and Ankara deny.

Under the Moscow-brokered truce deal signed by Armenia in November in the face of almost certain defeat, Russia deployed thousands of peacekeepers in the territory for at least five years and a number of transport corridors were agreed.

The agreement sought to end nearly three decades of military conflict over the enclave, with Azerbaijan defeated at the end of the first war in 1994.

Daria Isachenko, research associate at the Centre for Applied Turkey Studies (CATS), said that the agreement signalled a key to the shift in policy from Armenia and Turkey towards one another.

“In the early 1990s, one of the core obstacles to relations was the conflict over Nagorno-Karabakh and strong opposition from Azerbaijan to any rapprochement between Ankara and Yerevan. With the status quo now changed after Armenia’s defeat, Azerbaijan does not object anymore,” she said.

However, the priority for Baku is opening the transport corridor with Nakhichevan, an Azerbaijan exclave bordering Armenia and Iran, as agreed under the pact.

Using this corridor, Turkey will directly access Azerbaijan without using the land routes of Georgia and Iran. The route will also be significantly shorter than those already in place.

“The Nakhichevan corridor is in the interests of Azerbaijan, Turkey, and Russia. However, in Armenia it is associated with risks,” she said.

“Yerevan’s statements on the readiness to normalise relations may signal the fact that they have little choice now but to concede.”

For citizens of both countries, the prospect of a shift in relations is viewed with hope and scepticism.

Armenians Al Jazeera interviewed said they have a deep mistrust of Turkey, ingrained by the inherited trauma of the mass killings, while Turkish people said they struggle with the hostility often displayed by their neighbours.

Yet for residents of the border areas of both sides, reopening could bring a much-needed financial boon from new trade and tourism opportunities.

Gayus Gavrilof, who is Armenian-Turkish and lives in Istanbul, said the Armenian community in Turkey believes Turkey should make the first steps towards friendship if there is to be normalisation.

“[But] I will never believe in an honest normalisation between the two countries,” she said.