By Arwa Ibrahim and Mersiha Gadzo

The Taliban has continued to advance on urban centres in Afghanistan after capturing smaller administrative districts in the past weeks, claiming to have taken over a sixth provincial capital in four days.

The Afghan forces have meanwhile tried to push back the Taliban’s advance, alleging to have killed more than 500 members of the armed group.

The battle between the Taliban and Afghan forces has intensified as foreign troops are scheduled to withdraw from the war-torn country by August 31.

Here were updates from Monday:

The Pentagon has said that the security situation in Afghanistan was “not going in the right direction”.

Pentagon spokesman John Kirby said the US was deeply concerned about the trend, but that Afghan security forces had the capability to fight the Taliban.

“These are their military forces, these are their provincial capitals, their people to defend and it’s really going to come down to the leadership that they’re willing to exude here at this particular moment,” Kirby said.

Late on Sunday afternoon, the Taliban flew its flag from the main roundabout in the northern city of Kunduz.

It marked the third time in seven years that the armed group had managed to wrest control of what the government had hoped would be a model for all of Afghanistan’s 34 provinces.

Residents speaking to Al Jazeera said the Taliban’s offensive on the eponymous capital began early on Saturday morning and by the next afternoon, the group had officially seized control of Afghanistan’s fifth-largest city.

The US needs to take the lead to get the Afghan government and the Taliban back to the negotiation table, Moeed Yusuf told foreign journalists in Islamabad, Pakistan.

He said Pakistan is pushing the Taliban to return to negotiations but its leverage is waning as the group gains more ground in Afghanistan.

Pakistan has not even been able to convince the Taliban to reopen the border crossing at Spin Boldak in southeastern Afghanistan, which the force captured last month, Yusuf said.

US President Joe Biden is standing firm on a US exit with limited options appearing to be on the table to reverse the Taliban’s momentum.

“The decision to withdraw was made in full knowledge that what we are seeing happen now was likely to happen,” Laurel Miller, until 2017 the US special representative for Afghanistan and Pakistan told the AFP news agency.

“Nearly 20 years of experience has shown us,” Biden said last month, “that ‘just one more year’ of fighting in Afghanistan is not a solution but a recipe for being there indefinitely”.

A rocket has exploded in the hospital compound belonging to medical humanitarian organisations in Lashkar Gah, the NGOs have said on Twitter.

“The [Doctors Without Borders Afghanistan] Boost Hospital next door was also hit. Fortunately, there were no injuries,” the NGO Emergency wrote on Twitter.

“Hospitals are not a target. We again call on all parties to respect health facilities and ensure that they are not put in harm’s way,” Emergency said.

A short while ago, a rocket exploded in EMERGENCY's Lashkar-Gah hospital compound. The @MSF_Afghanistan Boost Hospital next door was also hit. Fortunately, there were no injuries. pic.twitter.com/3BTdmODjPV

A rocket exploded in the compound of @MSF Boost hospital in Lashkar Gah. The explosion was very close to our Emergency Room, and it could have been much worse. @Emergency_NGO hospital, next door was also hit by a rocket. Thankfully there were no injuries at either facility. pic.twitter.com/9YgrOfzzlw

“The explosion was very close to our Emergency Room, and it could have been much worse,” Doctors Without Borders Afghanistan said on Twitter.

In Kunduz, many desperate families, some with young children and pregnant women have abandoned their homes, hoping to reach the relative safety of Kabul, 315km (200 miles) to the south – a drive that would normally take about 10 hours.

Ghulam Rasool, an engineer, was trying to hire a bus to get his family to the capital as the sound of gunfire reverberated through the streets of his hometown.

“We may just be forced to walk till Kabul, but we are not sure if we could be killed on the way … ground clashes were not just stopping even for 10 minutes,” Rasool told the Reuters news agency.

Pakistan says the international community needs to look into the “meltdown” of Afghan security forces in the face of Taliban offensives, instead of blaming Pakistan for the fast-deteriorating situation.

“The capacity-building, the training, the equipment … where is it?” Pakistani Foreign Minister Shah Mehmood Qureshi said at a news conference, referring to resources spent by the international community, particularly the US, on bolstering Afghan national forces.

“Issues of governance and the meltdown of Afghan national defence forces need to be looked into,” he said.

Pakistan cannot be held responsible for the failure of others, he said.

In the west, near the border with Iran, security officials have said heavy fighting is under way on the outskirts of Herat.

Arif Jalali, head of Herat Zonal Hospital, said 36 people had been killed and 220 wounded over the past 11 days.

More than half of the wounded were civilians, he said, and women and children were among the dead.

NATO’s exit from Afghanistan is continuing, an official of the military alliance has said.

“There is no military solution to the conflict, and the Taliban must understand that they will never be recognised by the international community if they reject the political process and try to take the country by force,” the official added.

“They must cease their attacks and take part in peace talks in good faith.”

Martin Griffiths, the under-secretary-general for humanitarian affairs and emergency relief coordinator has said in a statement: “I am extremely concerned by the deteriorating situation in Afghanistan where more than 1,000 people have been killed or injured due to indiscriminate attacks against civilians in Hilmand, Kandahar, and Hirat provinces in the last month alone.”

“There are grave concerns for women’s survival and basic human rights,” he said, adding that 40 years of war and displacement, compounded by climate shocks and COVID-19, have left almost half of Afghanistan’s population in need of emergency aid.

He joined UN Secretary-General Antonio Guterres and members of the Security Council in strongly condemning attacks against civilians, and calling for a ceasefire.

Will Mazar-i-Sharif be the next to fall?

Earlier on Monday, the Taliban said it was moving in on Mazar-i-Sharif – the largest city in the north and a linchpin for the government’s control of the region – after capturing Sheberghan to its west, and Kunduz and Taloqan to its east.

A spokesman said Taliban fighters had entered the city, but officials and residents contacted by phone said the group was exaggerating, with clashes confined to surrounding districts.

“The enemy is trying to distort public opinion and create anxiety for the civilian population by their propaganda,” said a statement from the provincial police force in Balkh, of which Mazar-i-Sharif is the capital.

The loss of the city, steeped in history and long an economic hub, would signal the collapse of Kabul’s control of the north and likely raise crucial questions about the future of the government.

Germany rejects calls for troops to return to Afghanistan

Germany’s defence minister has rejected calls for its soldiers to return to Afghanistan after Taliban fighters took Kunduz city where German troops were deployed for 10 years.

Germany had the second-largest military contingent in Afghanistan after the United States, losing more troops in combat in Kunduz than anywhere else since World War II.

“The reports from Kunduz and from all over Afghanistan are bitter and hurt a lot,” Defence Minister Annegret Kramp-Karrenbauer said on Twitter.

“Are society and parliament prepared to send the armed forces into a war and remain there with lots of troops for at least a generation? If we are not, then the joint withdrawal with the partners remains the right decision.”

Hundreds of families from Takhar and Kunduz have had to leave their homes and settle in a safe place in Kabul.

Malika Bano, a displaced person from Kunduz province told The Associated Press news agency: “We became homeless and had to escape through Angoor Bagh [a location in Kunduz province] and walk on foot. We gave my daughter-in-law’s earring to the driver as payment to bring us to a safe place in Kabul.”

Bibi Ruqia from Takhar province said: “There was a bombing, a rocket hit my house. We had to escape, now we are here in a park.

“We don’t know anyone here to help us and we don’t have money, we even forgot to bring our national ID cards. We walked with slippers, we didn’t have the chance to put on our shoes,” Ruqia said.

Al Jazeera’s Rob McBride reporting from Kabul said some of the gains made by the Taliban are small cities, but they also include Kunduz, a big city that is strategically important.

“It’s a very significant victory for the Taliban … Government forces this time have pledged to retake many of these areas. It is confirmed that special forces are engaged with the Taliban inside Kunduz,” McBride said.

“But we are seeing fighting continuing in other areas across Afghanistan towards the west, towards the strategically important city of Herat. Fighting continues around that city and down in the Taliban strongholds of Kandahar and Helmand – in those provinces – and also in the capital city of Helmand, Lashkar Gah, inside the city itself.”

Hello, this is Mersiha Gadzo taking over the live updates .

Taliban fighters took control of another provincial capital in northern Afghanistan, the sixth to fall in the past four days, officials confirmed.

The group captured the main government facilities in Aybak, the capital of Samangan province, according to provincial councillor Raz Mohammad and two lawmakers representing the province in the parliament.

Pro-government forces abandoned the city and fled to a hilltop called Koh-e-Bast after the central government failed to send reinforcements, one of the lawmakers said.

At least 27 children have been killed and 136 injured across three provinces of Afghanistan over the past three days amid escalating violence, the UN children’s agency said.

The Afghan forces claimed to have killed more than 500 Taliban fighters in air and ground offensives in the past 24 hours.

Some “579 Taliban terrorists were killed and 161 others were wounded as a result of Afghan ANDSF (National Defense and Security Forces) operations”, it said. 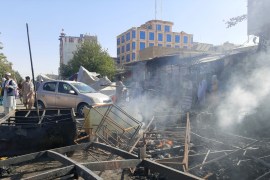 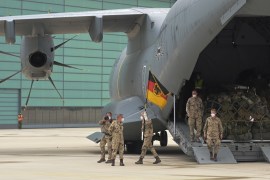 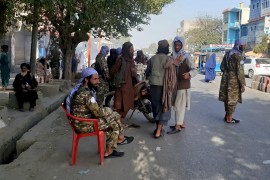 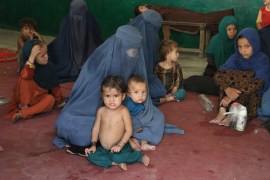