The Taliban has captured three more provincial capitals as they take their fight to the cities after seizing much of the countryside in recent months.

The group has seized five provincial capitals in Afghanistan since Friday, in a lightning offensive that appears to have overwhelmed government forces.

Kunduz, Sar-e-Pul and Taluqan in the north fell within hours of each other on Sunday, the Taliban and officials in the cities confirmed.

A Taliban statement on Sunday said it had captured the police headquarters, governor’s compound and prison in the strategic northeastern city of Kunduz.

Local sources and journalists in Kunduz confirmed to Al Jazeera that Taliban fighters are present in the capital.

“Heavy clashes started yesterday afternoon, all government headquarters are in control of the Taliban, only the army base and the airport is with ANDSF [Afghan security forces] from where they are resisting the Taliban,” Amrudddin Wali, a member of Kunduz provincial assembly, said.

Health officials in Kunduz said 14 bodies, including those of women and children, and more than 30 injured people have been taken to hospital.

“We don’t know what’s going on outside because all our efforts and attention is on the patients coming in,” a doctor told Al Jazeera from a Kunduz hospital.

In a statement on Sunday, the Taliban said its fighters have also captured the city of Sar-e-Pul, capital of the northern province of Sar-e-Pul.

Mohammad Noor Rahmani, a provincial council member of Sar-e-Pul province, told Reuters news agency the group has taken government buildings in the capital, driving officials out of the city to a nearby military base.

Parwina Azimi, a women’s rights activist in Sar-e-Pul, told the AFP news agency by phone that government officials and the remaining forces had retreated to an army barracks about 3km (2 miles) from the city.

The Taliban had the compound “surrounded”, Mohammad Hussein Mujahidzada, a member of the provincial council, told AFP.

On Sunday evening, the Taliban said on Twitter that it had taken Taluqan, the capital of Takhar province.

Taluqan resident Zabihullah Hamidi told AFP he had seen security forces and officials leave the city in a convoy of vehicles.

“We retreated from the city this afternoon after the government failed to send help,” a security source told AFP.

“The city is unfortunately fully in Taliban hands.”

Sunday’s takeovers come after the group seized the provinces of Nimruz and Jawzjan in the last two days.

On Saturday, the Taliban captured Jawzjan capital Sheberghan, the city’s deputy governor said, a day after Zaranj, capital of Nimruz, fell “without a fight”, according to its deputy governor.

The defence ministry said that on Saturday evening, US B-52 bombers struck several Taliban targets in Sheberghan. 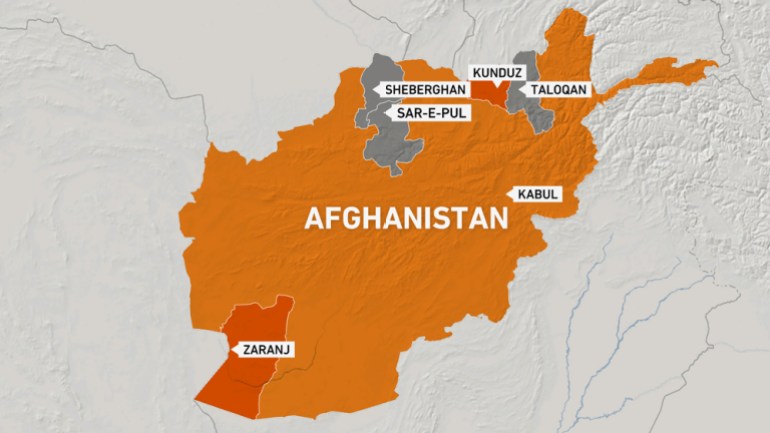 Meanwhile, people in Kunduz tried to flee before the Taliban’s arrival and are still afraid of going outside their houses, a resident told Al Jazeera.

“Though the fighting has calmed, it still feels like a military city,” the resident said, referring to the presence of Taliban forces in key parts of the city and the Afghan National Defence and Security Forces carrying out operations in the city.

On Sunday morning, Afghanistan’s defence ministry released a video of an Afghan commando saying the ANDSF had been conducting coordinated operations in the province over the last 24 hours.

The commando said in the video the Taliban suffered heavy casualties in these operations as “they were trying to take key points” in the province, adding that the armed group’s “dream” would not be fulfilled.

“You should be certain that the Afghan forces are with you,” the commando tells the people of Kunduz.

Al Jazeera’s Charlotte Bellis, reporting from the capital, Kabul, said: “A journalist in the centre of Kunduz told us the Taliban has taken over the police chief’s office, the election commission’s office and that the Taliban flag is flying at the central roundabout.”

“The government is denying Kunduz has fallen but, by all accounts, it has,” she added.

Though the Taliban has taken two provincial capitals since Friday, Kunduz – in the far north – would be the most significant to fall since the armed group launched an offensive in May as foreign forces began the final stages of their withdrawal from the country.

The Taliban has gained vast parts of rural Afghanistan since launching a series of offensives in May to coincide with the start of the withdrawal.

Intense fighting continued in the capitals of the southern Kandahar and Helmand provinces, which the Taliban has been trying to take for several weeks now.

The defence ministry statement also confirmed that air attacks were carried out in parts of the city that killed 54 Taliban fighters and wounded 23 others.

It made no mention of a clinic or school being bombed.

Ahmad Shuja Jamal, head of international affairs at Afghanistan’s National Security Council, told Al Jazeera that the Taliban lacks the capacity to hold the provincial capitals it has captured, but that its asymmetrical warfare involving mines and street-by-street fighting was time-consuming to combat.

“The sad reality of this ground changing hands, and the push for the Taliban to enter these areas that have been peaceful till this moment, is that civilians are really bearing the brunt of all of this,” Jamal said.

“Approximately two-thirds of the casualties have been women and children and that speaks to the Taliban’s modus operandi, which is that they’re using civilian homes to hide but also launching attacks and that is creating a terrible toll for civilians.”

Suhail Shaheen, an international media spokesman for the Taliban, told Al Jazeera the group wanted peace but that the government’s aggression meant it had to fight.

“We have the capabilities to take over cities but we were waiting for them and our policy is for peace and reconciliation but of course when they [government] launched an offensive against us, they started the bombing campaign against us, we reacted and took two provincial centres,” Shaheen said.

“But still, our policy is for a negotiated settlement of the Afghan issue.”

On Saturday, the US embassy issued a statement condemning the Taliban’s inroads into provincial centres in the south and north.

“We condemn the Taliban’s violent new offensive against Afghan cities. This includes the unlawful seizure of Zaranj, the capital of Afghanistan’s Nimroz province, the attack on Sheberghan, capital of Jowzjan province yesterday and today, and continuing efforts to take over Lashkar Gah in Helmand and provincial capitals elsewhere,” the statement read.