Thailand police have fired tear gas and rubber bullets at demonstrators in Bangkok protesting against the government’s failure to handle coronavirus outbreaks and its effect on the economy.

More than 1,000 protesters defied restrictions on public gatherings on Saturday and marched towards Government House, the office of Prime Minister Prayuth Chan-ocha, demanding his resignation.

Police sealed off a road near Victory Monument using containers and shot tear gas and rubber bullets to push protesters back.

“We are holding this line,” police announced over a loudspeaker.

About 100 officers were seen in riot gear and shields metres away from where demonstrators had gathered.

Street protests against the government have been held in recent weeks by several groups, including Prayuth’s former political allies, as frustrations mount over its management of coronavirus outbreaks and the damage pandemic measures have inflicted on the economy.

Franc Han Shih, a journalist based in Bangkok, told Al Jazeera that Saturday’s protest was partly triggered by the Thai government’s sluggish rollout of its COVID vaccination programme

“The wrong vaccination policy really irritated citizens in Thailand,” said Shih, who added that the government had made a deal for 10 million doses of the AstraZeneca jab, but had only  received half so far.

“Although China provided more than 6 million doses of Sinovac, it isn’t enough,” he added.

On Saturday, Thailand reported a record of nearly 22,000 new reported COVID-19 cases and the highest number of daily deaths – 212.

Overall, it has reported 736,522 cases of the coronavirus, including 6,066 deaths, since the pandemic began last year.

“I’m worried about the situation but we will have to continue fighting despite the severe COVID outbreak,” 27-year-old protester Nat, who only gave one name, told AFP news agency.

A youth-led street protest movement for democracy rose up last year and at its peak drew tens of thousands to rallies in Bangkok.

The demonstrators called for the resignation of Prayuth, the former army chief who came to power in a 2014 coup, as well as changes to the military-scripted constitution and calls for changes to the monarchy. 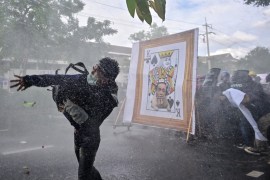 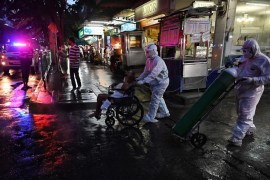 Government has hinted that strict curbs could be extended until the end of August if cases continue to rise. 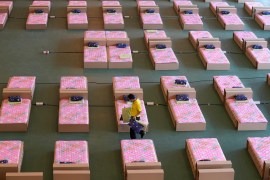 The Southeast Asian country is struggling to contain its latest outbreak driven by the highly contagious Delta variant.