The United States has imposed visa restrictions on 50 immediate family members of Nicaraguan lawmakers, prosecutors and judges, the State Department said on Friday.

“Today we are announcing visa restrictions against a further 50 individuals, all immediate family members of regime-affiliated officials who have directly contributed to measures adopted by the Government of Nicaragua that do not meet the conditions for transparent, free, and fair elections to which all OAS member states have committed under the Inter-American Democratic Charter,” State Department spokesman Ned Price said in a statement.

“As these actions demonstrate, the United States is committed to promoting broad accountability for anyone responsible for or benefitting from the Ortega-Murillo regime’s attacks on democratic institutions.”

For months, the government of President Daniel Ortega has been detaining political adversaries, including presidential hopefuls, ahead of an election in which the former Marxist fighter and Cold War antagonist of Washington will be running for a fourth consecutive term.

The State Department said the government has arrested 32 political opponents in the last two months alone, including Berenice Quezada, 27, a candidate for vice president, two days after she registered as an anti-government candidate in the nation’s November 7 elections.

Her party, the conservative Citizens Alliance for Liberty (ACXL) said Quezada had been placed under house arrest. Authorities later said she had been charged with inciting terrorism, but would be released pending trial.

Quezada was Miss Nicaragua in 2017 and was arrested at her home late on Tuesday night.

“Quezada … is under house arrest without access to a telephone, with migratory restrictions and prohibited from running for public office,” the Citizens Alliance party tweeted.

“We demand that she be freed and Berenice Quezada’s human rights respected.”

Quezada would still apparently be unable to resume her candidacy because of the charges.

She was the eighth contender in the election to be arrested since May and had called on citizens to vote against “the dictatorship” of President Ortega, who is seeking a fourth consecutive term.

The Nicaraguan attorney general’s office said in a statement on Wednesday Quezada had committed acts that “incite hatred and violence”.

Nicaragua’s Confidencial news outlet reported on Tuesday that a complaint of “terrorism crime” had been filed against Quezada to Nicaragua’s electoral council over her critical remarks about a lack of freedoms in the Central American nation.

The Citizens Alliance registered Quezada on Monday to be the running mate of Oscar Sobalvarro, a businessman and former right-wing rebel commander for the Contras, the US-backed armed groups who fought Ortega’s Sandinista government in the 1980s.

The US and the European Union have imposed sanctions against members of Ortega’s family, including his wife and vice president, Rosario Murillo, as well as key figures within the government, warning that the November 7 elections cannot be free with most of Ortega opponents jailed.

The US government’s Bureau of Western Hemisphere Affairs said on Twitter that “Ortega-Murillo sunk to new depths of desperation” with Quezada’s house arrest.

Many business figures, journalists and politicians have fled abroad in recent months in anticipation of being arrested. 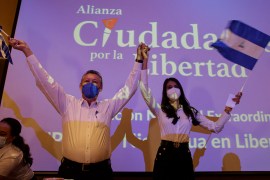 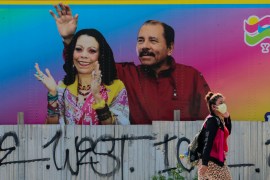 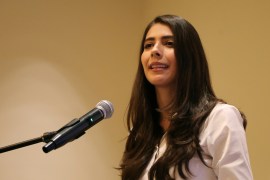