The Taliban has captured the city of Zaranj in Afghanistan’s Nimruz province, making it the first provincial capital the group has taken from the Afghan government as it steps up offensives in two other provinces.

Multiple sources told Al Jazeera that Zaranj, the capital of the southern province of Nimruz, had fallen to the Taliban on Friday.

There have also been reports that the group has taken control of the city of Lashkar Gah, the capital of Helmand province.

Fighting to reimpose strict Islamic law after being overthrown in 2001 by the US-led forces, the Taliban has intensified its campaign to defeat the US-backed government as foreign forces complete their withdrawal after 20 years of war.

The Taliban has taken dozens of districts and border crossings in recent months and put pressure on several provincial capitals, including Herat in the west and Kandahar in the south, as foreign troops withdraw.

A spokesperson for Nimruz’s police, who declined to be named for security reasons, told Reuters news agency that the Taliban had been able to capture the city because of a lack of reinforcements from the government.

Taliban sources said the group was celebrating, and Zaranj’s fall would boost the morale of their fighters in other provinces. A Taliban commander, speaking to Reuters on condition of anonymity, said it has strategic importance as it is on the border with Iran.

“This is the beginning and [you will] see how other provinces fall in our hands very soon,” he said. 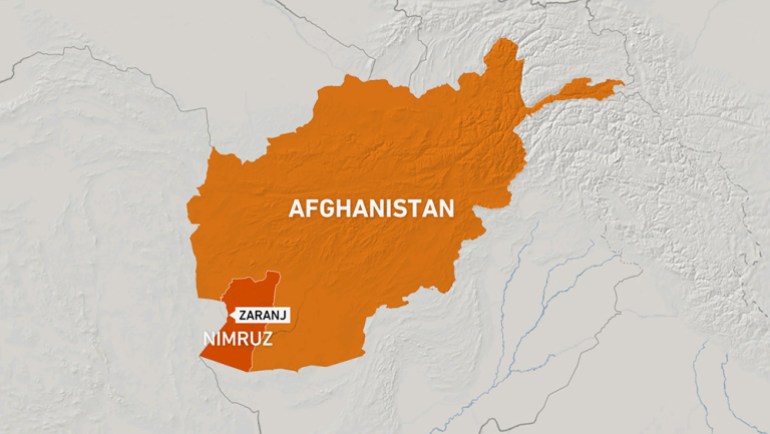 Al Jazeera’s diplomatic editor James Bays, reporting from Kabul, said multiple sources on the ground had confirmed the loss of the city, and he said it was a “very significant” development.

“The Taliban have issued pictures of what’s going on in Zaranj, [which] show Taliban fighters in Humvees – vehicles paid for by Americans and NATO countries – taken from the Afghan forces; they’re now using them to patrol the streets of Zaranj,” Bays said.

On Friday, the Taliban sent a message to the media saying it had released prisoners from the jail in Zaranj. Qari Yousuf Ahmadi, a spokesman for the Taliban, also said they have taken control of the provincial intelligence headquarters.

Along with their written claim, the Taliban also sent photos and video to the media showing its fighters in the vicinity of government buildings and the entrance gate to the province. One picture shows its fighters stationed outside the provincial governor’s compound.

The news from Nimruz also comes as the UN Security Council met in New York to discuss the conflict.

The UN special envoy for Afghanistan on Friday questioned the Taliban’s commitment to a political settlement, telling the UN Security Council the war has entered a “deadlier and more destructive phase” with more than 1,000 civilians killed in the past month during a Taliban offensive.

“A party that was genuinely committed to a negotiated settlement would not risk so many civilian casualties, because it would understand that the process of reconciliation will be more challenging, the more blood is shed,” Deborah Lyons said.

“The Security Council must issue an unambiguous statement that attacks against cities must stop now,” Lyons told the 15-member council via video-link from Kabul.

Zaranj is a comparatively remote city of more than 63,000 inhabitants.

As a border province that is home to large licit and illicit trades, the takeover of Nimruz would offer the Taliban another possible revenue source from customs.

Nimruz province shares a border with Iran and Pakistan, and Zaranj is considered among the war-scarred country’s famed historical cities.

The Helmand River, one of the biggest in Afghanistan, also passes through the city into Iran.

In the video, Iranian border police can be seen turning back the crowds of people who were seeking safety across the border.

Previously, the group took control of border crossings in Kandahar and Herat, which has driven up local prices and given the Taliban the ability to charge vehicles crossing between Pakistan, Iran and Afghanistan.

The takeover of Zaranj, near the Iranian border, comes only days after the group tried to take the capitals of Herat, Kandahar and Helmand provinces.

In Kabul, Taliban attackers killed Dawa Khan Menapal, head of the Government Media and Information Centre, on Friday in the latest in a series of assassinations aimed at weakening President Ashraf Ghani’s democratically elected government.

His killing came days after the Taliban warned it would target senior administration officials in retaliation for increased air raids.

Elsewhere, Taliban fighters intensified clashes with Afghan forces and attacked militias allied with the government, officials said, stretching their dominance of border towns and closing in on two provincial capitals.

At least 10 Afghan soldiers and a commander of armed members belonging to the Abdul Rashid Dostum militia group in the northern province of Jowzjan were killed.

“The Taliban launched violent attacks on the outskirts of [provincial capital] Sheberghan this week and during heavy clashes, a pro-government militia forces’ commander loyal to Dostum was killed,” said Abdul Qader Malia, the deputy governor of Jowzjan province.

Another provincial council member said nine of the 10 districts of Jowzjan were now controlled by the Taliban and the contest to control Sheberghan was under way.

Al Jazeera’s Bays said with the Taliban going on offensive, Jowzjan and Helmand provinces are “teetering on the edge” of possible capture.

The latest development has prompted Britain to warn on Friday all UK nationals in Afghanistan to leave immediately due to the “worsening security situation”.

It warned Britons not to rely on it for emergency evacuation, saying the assistance it could provide was “extremely limited”.

With reporting by Ali M Latifi from Kabul, Afghanistan.