In a statement on Friday, Hezbollah said it had fired “dozens” of rockets in the disputed Shebaa Farms area after Israeli fighters early on Thursday launched rare air raids on neighbouring Lebanon following a second day of rocket fire across the border.

Later on Friday, the Israeli military said it had struck “the rocket launch sites in Lebanon”.

Israel said it did not wish to escalate to a full war, though it was ready for one.

“More than 10 rockets were fired from Lebanon into Israeli territory. Most of the rockets were intercepted by the … aerial defence system while the rest of them landed in open areas adjacent to Har Dov,” the disputed Shebaa Farms border district, the air force said on Twitter.

Israel’s Army Radio also reported that the military fired shells and artillery towards parts of southern Lebanon under the control of Hezbollah.

Air raid sirens sounded in the Upper Galilee in northern Israel, and in the Golan Heights, part of the territory Israel captured in the 1967 Middle East war.

It was the third day of cross-border hostilities that threaten a period of calm prevailing since 2006, when Israel and Hezbollah fought a one-month war.

Zeina Khodr, reporting from Lebanon, said that the situation was precarious after the marked escalation along the border but noted that both sides were “very careful in avoiding casualties”.

“[They are] treading carefully because any wrong move here could lead to all-out war,” said Khodr.

“These are two longtime enemies who are now sending messages to each other,” said Khodr. “But many in Lebanon will also tell you that this escalation in undoubtedly linked to what is going on in the region, because Lebanon is entangled, with Hezbollah of course being an ally of Iran.”

She added that figures close to Hezbollah told Al Jazeera that the movement’s response was “a message” and “warning” to Israel.

“They are telling the Israelis they cannot change the rules of engagement since the last war in 2006,” said Khodr. “Hezbollah is saying the ball is in Israel’s court. They can escalate the situation or calm it down.”

Lebanese officials had also condemned Thursday’s strikes by Israeli as an “escalation” that could mark a change of tactics by Israel.

“This is a very dangerous situation, with escalatory actions seen on both sides over the past two days,” it said, adding that it was working to “prevent the situation from spiralling out of control”.

Commenting on the situation, Sami Nader, of the Levant Institute for Strategic Affairs, described the escalation as “very serious” and said it was part of larger regional dynamics involving Iran.

“This is not a problem or a confrontation between Lebanese factions and Israel,” he said.

On Thursday, Israeli Defence Minister Benny Gantz said the country’s military was ready to strike Iran, calling it “a global and regional problem”.

The comments came amid rising tensions in the region following a deadly drone strike last week on an Israeli-managed tanker off the coast of Oman.

Israel has said it provided to allies “hard evidence” that Iran was behind the attack on the tanker, Mercer Street, without offering details. The United States and the United Kingdom also blamed Iran for the attack that killed two people – British and Romanian crew members – and pledged to respond.

Tehran has rejected the accusations, and said it would “respond decisively” if other countries decide to attack its interests.

“We state this clearly: Any foolish act against Iran will be met with a decisive response. Don’t test us.” 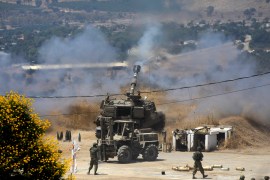 Hezbollah-run station confirms two air raids outside the town of Mahmoudiya, near the Lebanese-Israeli border. 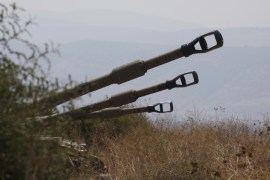 Rocket sirens were heard in several northern Israeli communities, close to the frontier with Lebanon.