French President Emmanuel Macron has criticised a “failing” Lebanese political class he blamed for their country’s economic turmoil as he opened an international donors’ conference on the first anniversary of a massive explosion that ripped through Beirut’s port and devastated much of the capital.

Lebanon’s cabinet resigned in the wake of the August 4, 2020, disaster and has been acting in a caretaker capacity since then, while the country’s currency collapsed, jobs disappeared and banks froze accounts in what lenders have called one of the most severe financial crises of modern times.

Political squabbling has blocked the formation of a new cabinet that is needed to unlock international aid, even as Lebanon sinks deeper into turmoil.

“Lebanese leaders seem to bet on a stalling strategy, which I regret and I think is a historic and moral failure,” Macron said in opening remarks as host of the United Nations-backed conference on Wednesday aimed at raising at least $350m.

“There will be no blank cheque for the Lebanese political system. Because it is they who, since the start of the crisis but also before that, are failing.”

France has led international efforts to lift its former colony out of crisis. Macron has visited Beirut twice since the explosion, raised emergency aid and imposed travel bans on some senior Lebanese officials. He has also persuaded the European Union to agree on a sanctions framework that is ready to be used.

The French president also said the priority for Lebanon remained forming a government able to implement reforms. He pledged a further 100 million euros ($118.54m) worth of emergency aid for Lebanon, and 500,000 doses of COVID-19 vaccines for the country.

The conference, co-hosted by France and the UN, includes 40 heads of state and government, diplomats and heads of international organisations, according to Macron’s office.

‘Every assistance and support’

“There is no doubt that Lebanon needs every assistance and support from the international community, after determining needs and priorities,” Aoun said at the virtual donor conference, in remarks cited in a statement released by the Lebanese Presidency.

He stressed that restoring full operation of the Beirut Port was a top priority.

“Rehabilitating, developing and fully re-operating the port of Beirut – the artery of the Lebanese economy – is a pressing necessity and a top priority for us, and any international effort is welcome in this respect,” he said.

Also present at the conference was US President Joe Biden, who promised $100m in additional aid for Lebanon.

“But no amount of outside assistance will ever be enough if Lebanon’s leaders do not commit to do the hard but necessary work of reforming the economy and combating corruption,” he said.

“It’s essential. It has to start now,” Biden said. “There’s no time to waste. You know it. We are there to help if you do it.”

The Biden administration did not immediately specify where the new funding would go but Biden said it was in addition to $560m in humanitarian assistance devoted to Lebanon over the past two years.

Last year’s conference in the wake of the explosion raised about $280m, with the emergency aid being kept away from politicians and channelled through NGOs and aid groups.

The new aid will be unconditional, Macron’s office said, but some $11bn raised in 2018 remains locked away and conditional on a series of reforms.

The World Bank has called Lebanon’s crisis one of the worst depressions of modern history. The currency has lost more than 90 percent of its value against the dollar since the economic crisis erupted in 2019, and more than half of the population has been propelled into poverty.

Last month, Qatar said it would provide the Lebanese armed forces with 70 tonnes of food a month as it also called on Lebanese parties to form a new government “to achieve stability”. 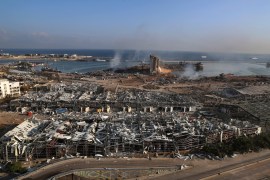 Lebanon marks the first anniversary of the devastating blast, as families of victims still wait in vain for justice. 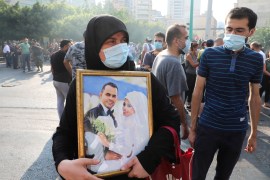 Can Lebanon deliver justice for the port explosion? 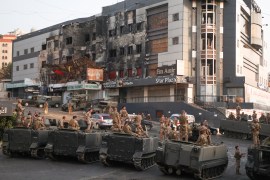 Hezbollah says at least two people killed in the attack in Kaldeh, as the army deploys to contain sectarian tensions.