A Brazilian Supreme Court justice has ruled that President Jair Bolsonaro should be investigated for making unproven claims that Brazil’s electronic voting system is riddled with fraud, adding the far-right leader to an ongoing probe on the spread of fake news by his government.

Wednesday’s ruling by Justice Alexandre de Moraes came after Bolsonaro stepped up his longtime attacks on Brazil’s voting system, claiming without evidence that it is marred by widespread fraud.

Bolsonaro, who is under increasing pressure amid the COVID-19 pandemic and has seen a recent drop in popularity, has said there will be no presidential elections next year as planned if the system is not overhauled.

He has spearheaded a push to have paper receipts printed after electronic ballots are cast in next year’s contest election, and thousands of his supporters rallied in cities across Brazil last weekend to support his demand.

But top judges and other experts in the South American nation have rejected Bolsonaro’s claims, saying the electronic voting system introduced in Brazil in 1996 is free of fraud.

Critics have accused the far-right leader of seeking to sow doubt ahead of the elections in order to be able to dispute the results. Recent polls show Bolsonaro trailing former left-wing President Luiz Inacio Lula da Silva, who is expected to challenge him at the ballot box.

Brazil’s Superior Electoral Court said on Monday it would investigate the president for abuse of office, improper use of official communication channels, corruption, fraud and other potential crimes in his attacks on electronic voting.

But Bolsonaro hit back a day later, saying he refuses to be intimidated and that Brazil was under an “internal attack”.

“I’m going to continue exercising my right to freedom of expression, to criticise, to listen to and above all answer to the will of the people,” he told supporters outside the presidential palace.

Bolsonaro, a COVID-19 sceptic who has rejected calls to impose strict lockdown measures to stem the spread of the virus, has faced mass protests demanding his impeachment as Brazil has been devastated by the pandemic.

A Brazilian Senate commission in April launched an investigation into the government’s handling of the coronavirus crisis, which has killed more than 558,400 people to date, according to Johns Hopkins University data.

Bolsonaro has since faced corruption allegations, and questions about alleged irregularities in the state’s procurement of COVID-19 vaccines from India. The president has denied any wrongdoing.

Meanwhile, Bolsonaro’s incoming chief of staff Ciro Nogueira, said the government would relaunch an ambitious social programme to fight hunger and poverty ahead of next year’s elections.

Bolsonaro, who swore in Nogueira as his closest aide on Wednesday, said he plans to increase the benefits of the popular Bolsa Familia social program by at least 50 percent and rename it Auxilio Brasil.

The longstanding cash handout, first introduced by Lula, benefits millions of poor Brazilians, who have faced increased hardship during the pandemic.

Bolsonaro brought Nogueira, a leader of the centre-right Progressive Party, into his cabinet to shore up support in Congress as he prepares for the 2022 election. “His appointment shows that the government wants a better relationship with Congress,” the president said. 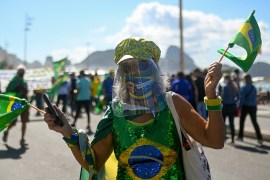 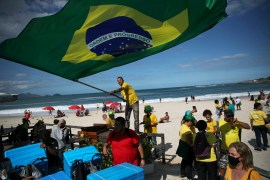 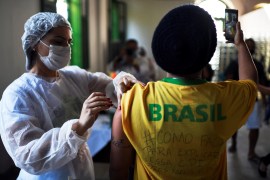 Brazil last registered a seven-day average of fewer than 1,000 COVID deaths in January at start of brutal second wave.