US President Joe Biden and Democratic Party leaders are facing a legal and political backlash from Republicans and real estate owners for the president’s decision Tuesday to extend a moratorium on evictions of renters in the United States despite questionable legal authority.

At President Biden’s request, the US Centers for Disease Control and Prevention (CDC) issued a revised national ban on evictions during the coronavirus pandemic targeted on US counties where transmission rates are highest and covering about 90 percent of renters at risk of eviction.

There are an estimated 6.5 million households presently facing eviction for unpaid rent in the US.

In Pennsylvania, a Republican candidate running for the US Senate called the ban “unconstitutional” and “unfair”.

“The Biden administration just stuck its finger in the eye of the United States Supreme Court and our Constitution with its illegal eviction ban,” said Pennsylvania Republican Sean Parnell.

“Joe Biden has no authority to tell people what they can or cannot do with their private property,” Parnell said in a statement. “Employers are begging people to come to work, there’s zero excuse for this any more.”

The renewed CDC eviction ban came after White House officials had insisted on Monday they did not have legal authority to reissue the ban. Biden himself acknowledged the legal landscape was uncertain when he previewed the CDC’s order for reporters at the White House on Tuesday.

“I’ve sought out constitutional scholars to determine what is the best possibility, that would come from executive action or the CDCs judgement. What could they do that was most likely to pass muster constitutionally,” Biden said.

“The bulk of the constitutional scholarship says that it’s not likely to pass constitutional muster,” Biden admitted but added, “there are several key scholars who think that it may, and it’s worth the effort”.

The US Supreme Court in a 5-4 decision in June had allowed the CDC’s previous ban on evictions to remain in place temporarily but signalled in its opinion the court doubted the CDC’s legal standing without specific authority from Congress.

A lower court in May had ruled in favour of a coalition of landlords led by the Alabama Association of Realtors. “Congress never gave the CDC the staggering amount of power it now claims,” the Realtors argued.

White House senior adviser Gene Sperling had said Monday at a White House briefing that administration lawyers had been “unable to find the legal authority for even new targeted eviction moratoriums”.

Biden noted that by the time legality of the CDC order is adjudicated in court it will probably have reached its 60-day expiration. The Biden administration expected that large sums of aid to tenants and landlords under a $46.5bn federal programme will have been distributed, easing circumstances for many.

Advocates for renewing the moratorium argue that the CDC is within its statutory authority by focusing the moratorium on localities with high transmission rates as COVID-19 cases surge anew because of the rapid spread of the Delta variant.

“The president would not have moved forward with a step that he did not feel comfortable in the legal justification,” Psaki said.

“This is a narrow, targeted moratorium that is different from the national moratorium.”

Further, advocates argued Congress’s approval of the rental assistance program is an expression of congressional will to protect tenants from being evicted and assist landlords that courts can rely on.

Landlords not granted a forbearance by their lenders must continue to pay mortgages and must pay property taxes, even if their tenants are not paying rent and they would face stiff potential penalties for violating the ban by attempting to evict tenants.

The episode brought to light underlying tensions within the Democratic Party’s establishment and its rising progressive wing led by “The Squad” of House of Representatives members Alexandria Ocasio-Cortez, Ilhan Omar, Ayanna Pressley and Rashida Tlaib.

A new member of the progressive Democrats, Representative Cori Bush – elected in 2020 – emerged as the leader of the push against inaction by Congress and the White House, which are controlled by members of her own party.

On Friday night, I came to the Capitol with my chair. I refused to accept that Congress could leave for vacation while 11 million people faced eviction.

For 5 days, we’ve been out here, demanding that our government acts to save lives.

Bush, who is Black and had once been homeless, refused to allow the question of renewing the eviction ban fade as House members left Washington, DC, for the month of August without acting on a renewal. 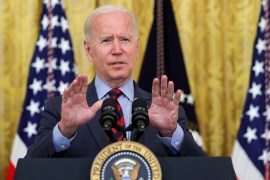 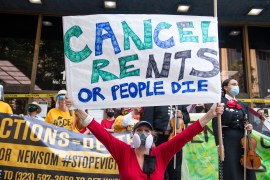 US-wide moratorium on rental evictions expired at midnight on Saturday, threatening to push millions into the streets. 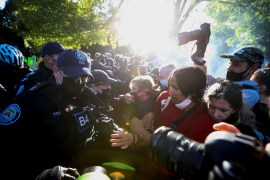 Encampment evictions: Another face of colonial violence in Canada

The evictions in Toronto are part of violent efforts to sustain settler control over Indigenous land. 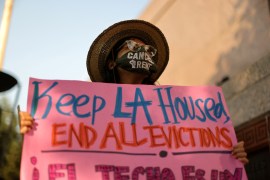