The formation of Afghanistan’s new government is in its final stages, the Taliban has said, as the US withdrew the last of its forces from the country.

He added that it was still too early to say who will be part of the new cabinet.

“We have covered about 90 to 95 percent and we will announce the final outcome in the following few days,” he said.

Celebratory gunfire was heard across Kabul following the US withdrawal. The Taliban took complete control of the Kabul airport in the early hours of Tuesday.

In a tweet following the US withdrawal, Haqqani said that “we made history again. The 20-year occupation of Afghanistan by the United States and NATO ended tonight.”

Haqqani had told Al Jazeera in an earlier interview that the overall aims of the new government will be “to maintain and be faithful to what we are fighting for. To serve the Afghan people and to serve Islam”.

The Taliban has said it wants to form an “inclusive” government and that it has been talking to members of former governments to encourage them to join a new administration. It has also pledged to respect human rights and women’s freedoms “within Islamic law”.

However, tens of thousands of Afghans have desperately tried to flee the country after the Taliban took control of Kabul on August 15.

Many Afghans fear a return to the Taliban’s brutal rule between 1996 and 2001, when women’s rights were severely curtailed and the group meted out strict punishments in line with its harsh interpretation of Islamic law.

Many Afghans are particularly fearful of the Haqqani Network, known to be the most brutal and violent group associated with the Taliban.

The network, started by Anas’s father Jalaluddin, has been folded into the Taliban for many years and has been accused of being responsible for some of the worst attacks in Afghanistan in recent years.

Haqqani is classified as a wanted “terrorist” by the United States and is under United Nations sanctions.

He was prison for five years and was sentenced to death, but was released two years ago to accelerate peace talks with the US in Qatar.

His brother Khalil Ur-Rahman Haqqani, also labelled a “terrorist” by the US and the UN, is currently in charge of security for Kabul.

In the past weeks, there have been reports of the Taliban conducting house-to-house searches looking for people who worked with the former government or foreign forces, and the group has been accused of violent attacks in areas under its control.

Haqqani said the Taliban as a movement is united and that Afghans should not fear the group.

“We took control of Kabul and other provinces peacefully,” he said. “This shows our unity and alliance. We hope we will prosper.”

The new government will face a range of challenges, including potential economic collapse as foreign countries and institutions withhold aid and funds, and scrutiny and pressure from the international community over its human rights record.

“We fought with the world empty-handed and came this far. We can get rid of such a group, as we have in the past,” he said.

“This is not something to be stressed about.” 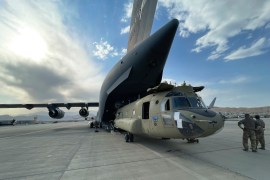 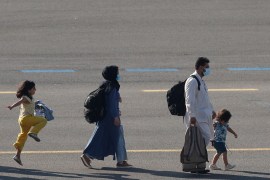 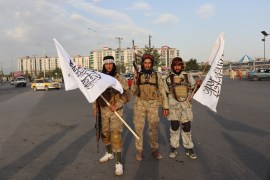 Afghanistan is ‘a free nation’: Taliban celebrates US defeat

Taliban congratulates Afghans on their victory after the withdrawal of the last US soldier.