The suspect’s head is covered by a black bag.

He is made to sit on a chair in a corner as the officer in charge wraps more bags around his head.

The suspect moans and sobs, then falls to the ground.

A brief struggle ensues and several policemen hold him down as the officer in charge keeps wrapping more plastic around his head.

Within minutes, the suspect stops breathing.

This killing was caught on a security camera in the Thai central province of Nakhon Sawan on August 5. The footage was leaked online last week, sending shockwaves through Thailand, stirring a fierce public outcry and a heated debate over long-standing allegations of police brutality in the Southeast Asian country.

The police officer in charge has since been identified as Thitisan “Jo Ferrari” Uttanapol and his victim as 24-year-old Jeerapong Thanapat.

According to local media reports, a total of six policemen were involved in Jeerapong’s death. The Bangkok Post newspaper said the young man, arrested for selling methamphetamine pills, suffocated to death as the officers tried to extort a bribe of two million Thai baht ($60,000) for his release. Following Jeerapong’s death, the Post said the policemen even tried to cover up their tracks by ordering doctors at Sawan Pracharak Hospital to state the cause of the detained man’s death as a drug overdose.

Amid the public outrage, Thai police began a manhunt looking for Uttanapol. On Wednesday, a police spokesman promised criminal charges, as well as disciplinary action, as other officers raided Uttanapol’s home in the capital, Bangkok. There, they found at least 30 cars, including Bentleys, Porches, Lamborghinis and Ferraris, illustrating how the disgraced policeman had earned his nickname.

A day after the raid, Uttanapol turned himself in to police.

In a bizarre twist, authorities allowed him to stage a news conference to explain his version of events.

At first, Uttanapol tried to justify his actions.

“I only put the bag on his head because I did not want him to see my face. He tried to tear off the bag, so I decided to handcuff him.”

Uttanapol then blamed his actions on a desire “to keep drugs off the street”.

“I made a mistake and I admit this,” he said.

Researchers in Thailand who have devoted years to studying this kind of torture say Jeerapong’s abuse and death is not an isolated incident. Rather, they say, this is just one case in hundreds reflecting a systemic problem.

“We have never seen a video like this,” said Pornpen Khongkachonkiet from the Cross Cultural Foundation (CrCF), a Thai rights group that documents torture and abuse in police custody. “But according to the survivors we’ve interviewed, this is something that happens. We have heard from detainees many times talking about plastic bags.”

CrCF has documented at least 20 custodial deaths across Thailand since 2007 and nearly 300 complaints of torture since 2014 in southern Thailand, where a conflict between separatists and Thai security forces has been raging for decades. The torture complaints involve violence against civilians by the military but Pornpen said the cases of abuse was probably much higher when factoring in the Thai police’s anti-drug campaign.

Thai police launched their so-called “war on drugs” in 2003, when former Prime Minister Thaksin Shinawatra rolled out a widely criticised anti-drug campaign where thousands of suspects were killed in the first three months alone.

While the arbitrary killings are not as widespread as before, human rights groups say torture of drug suspects remain rife.

Testimony given to CrCF by former detained drug offenders paints a dark picture of what can happen in the early moments of custody. Some of the interviews show that police officers sometimes deny access to legal representation, issue verbal threats and use physical violence.

“They should treat prisoners like human beings,” one former drug offender told CrCf in a recent report. “But once you’re inside, you have no rights, no voice.”

Pornpen told Al Jazeera that a failure to criminalise torture and enforced disappearances has led to a “culture of impunity” in Thailand.

“It’s systemic, there’s a system in place to protect the perpetrators within the judicial system. Not only are police protected, but lawyers and judges are also implicit,” she said. “They feel they are protecting an even bigger institution than themselves.”

Al Jazeera made multiple calls to the police to request a comment. But all of the calls went unanswered.

Sunai Phasuk, a Thai researcher with Human Rights Watch, says state-sanctioned torture and killings are nothing new in Thailand.

“The torture and killing of a drug suspect in Nakhon Sawan province is not an isolated incident by rogue police officers,” he said. “Harsh measures remain politically popular, and police brutality has been tolerated or even encouraged in Thailand’s anti-drug campaign.”

Sunai said that virtually none of the officers responsible for the so-called “war on drugs” killings and related abuses have been prosecuted.

“There is an old motto that says: ‘There is nothing under the sun the Thai police cannot do.’ Sadly, in reality, many police officers in Thailand think this means they can operate outside the bounds of the law, without fears of accountability,” Sunai said.

Many believe if Uttanapol’s actions were not caught on camera, he would have simply got away with murder.

Nareeluc Pairchaiyapoom, the director of the Rights and Liberties Protection Department at the Thai government’s Ministry of Justice, told Al Jazeera that the government is attempting to acknowledge a torture problem in law enforcement and the military.

“The situation is getting better. The cases are decreasing,” she said, without citing numbers. “Also the top-level command in the south and the minister of defence are much more aware of this problem. They are monitoring their staff closely and that’s why the numbers are decreasing.”

Since 2018, The Thai Ministry of Justice and the Association to Prevent Torture (APT), an organisation focused on the prevention of torture, have collaborated in a programme aimed at reducing mistreatment at the hands of Thai law enforcement.

Shazeera Ahmad Zawawi, a senior adviser at APT, told Al Jazeera that the aim of the programme was to build confidence in the government and help promote the importance of strengthening detention safeguards during the first hours of police custody.

“We worked closely with them [law enforcement] to understand what is torture, what is torture prevention, and what safeguards can be used,” she said. “The NGOs can only expose and show them where they’ve gone wrong and that they can do better. But the government needs to install the policies for change to happen.”

The group has developed an anti-torture handbook, a reference for government officials, law enforcement officers on how to understand different aspects of torture prevention. APT hopes to continue working with the Thai government to adopt a more human rights-focused approach to criminal justice. The programme is also looking into developing a training module on how to conduct effective and rights-based investigations for police.

Many hope the anger ignited by the video of Jeerapong’s death will help speed up the pace of reforms but for the victims of police violence, it only brings back painful memories, said Pornpen, the CrCF director.

“We have victims who have seen this clip now and are feeling a surge of trauma, bodies shaking,” she said. “Not only the victims, but the families who may have doubted their family member’s accounts are now feeling a sense of regret.” 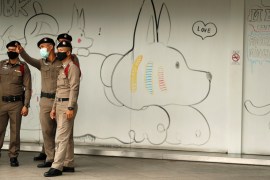 Two police officers are being sought in connection with the torture death of a suspected drug dealer in early August. 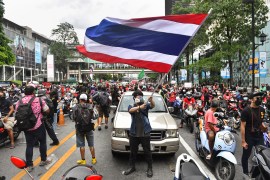 Anti-government protests in recent weeks have resulted in violent clashes with police. 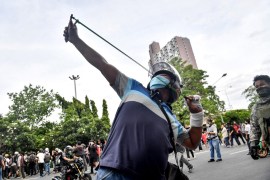 Thai protesters clash with police at anti-PM rally in Bangkok 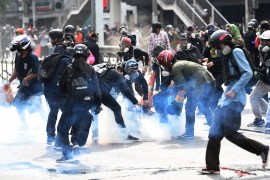