Manavgat, Turkey – Turkey’s southern coastline is burning. On the wooded hills of Antalya’s Manavgat district, plumes of thick smoke appear in the sky one after another as each time a forest fire is brought under control, another seems to ignite.

A blood-red sun shines through the sallow haze and as visibility clears, the charred, skeletal remains of what were forests and villages are revealed. This, many believe, is just the latest sign the world is entering an era of climate crisis, and Turkey is not prepared for it.

Over the past six days, 132 destructive blazes have raged through southern and other parts of Turkey, killing eight people and burning at least 118,789 hectares of land, according to the European Forest Fire Information System.

While controversy is rife, with many in Turkey believing the fires are the result of “sabotage” – a theory encouraged by many politicians – they coincide both with months of severe drought and extreme temperatures.

Antalya, a tourist hotspot that averages near the mid-30s Celsius (95 Fahrenheit) at this time of year, has seen highs of more than 40C this week. On July 20, Turkey recorded its hottest ever temperature at 49.1 (120.38 Fahrenheit) degrees in the southeast.

Many of the blazes tore through forests near beach destinations popular with local and European tourists, such as Bodrum and Marmaris, with people fleeing in cars, small boats and in some cases luxury yachts. Soaring temperatures have also seen wildfires break out across much of southern Europe, including Greece, Spain and Italy.

Manavgat is among the most fire-affected places in Turkey, and while seasonal fires are normal and even healthy for the local ecosystem, environmental groups say they have never been seen on this scale. With the landscape parched and strong winds – in particular, one that blows from the northeast known as “poyraz” in Turkey – the authorities are struggling to move fast enough to control things.

The small village of Sirtkoy, where the main income comes from growing aromatic bay leaves used in cooking, caught fire in the early hours of Sunday morning. Within an hour, the local school was gutted and many of the houses were reduced to rubble.

“All of this area was fine yesterday,” said resident Mustafa, who did not want to give his last name, pointing to a blackened, still-smouldering pile of stones that had been his friend’s house. “The fires came this morning at 5am and this burned down. At 6am, the fire was done, but at 9am the wind came back again and so did the fire.”

When Al Jazeera visited Sirtkoy on Sunday afternoon, planes, firefighters and forestry workers battled tirelessly to control flames that, like a trick candle, kept reigniting. With pungent smoke turning the whites of their eyes red, many of the men had little more to protect their lungs than disposable surgical masks.

Villagers doused exterior walls and possessions with bottles of water, trying desperately to keep the flames away, while some asked why the authorities were yet to take responsibility for a lack of preparation for a disaster that many could see coming.

“No one has taken responsibility for these fires and we have nothing after today,” said resident Hatice Cinar, the sound of burned trees collapsing ringing from the forest below.

Cinar said the village is not suitable for growing vegetables or keeping animals so the only way of life they know is growing bay leaves – she had 500 trees, which she had hoped would give her 18-year-old son a future, but they have all been destroyed.

“With the forest, we lost everything,” she said.

Over the weekend, President Recep Tayyip Erdogan and other government ministers visited communities destroyed by the fires to inspect the damage and offer their condolences.

“We will continue to take all necessary steps to heal our nation’s wounds, compensate for its losses, and improve its opportunities,” said Erdogan, as he promised that the government would provide financial support to those affected. The measures announced included covering rents and postponing taxes, social security and credit payments, as well as offering credit with zero interest to small businesses.

“We cannot do anything beyond wishing the mercy of God for the lives we have lost but we can replace everything that was burned,” Erdogan said. 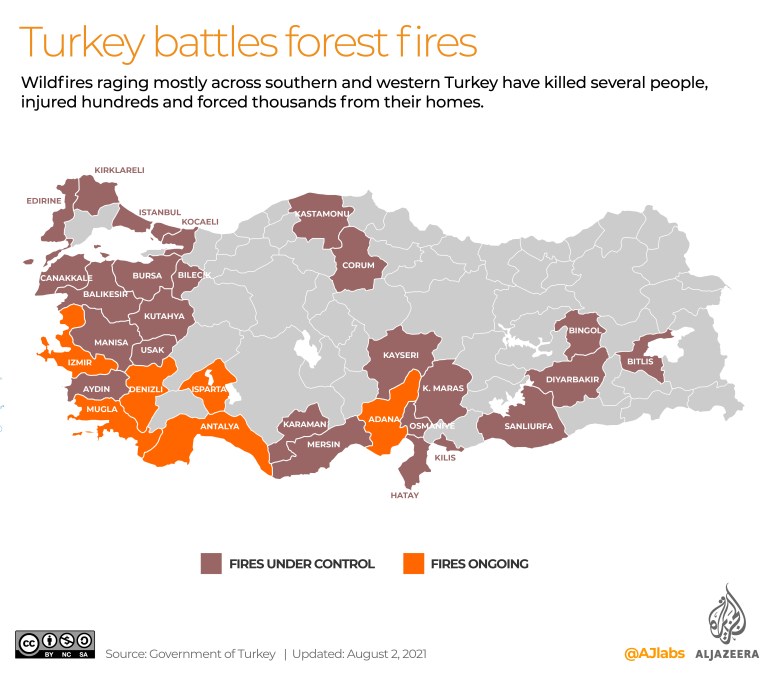 Some have criticised Turkey’s government for its handling of the disaster, in particular, due to a lack of firefighting planes in the country. Instead, waterbombers have been mobilised from Ukraine, Russia, Azerbaijan and Iran to help, and the European Union said on Sunday it would send three more.

With a lack of resources in the fire-hit regions, firefighters from municipalities across the country were sent in to help. Teams of volunteers gathered to offer support to the displaced, including members of Antalya’s Communist party, who have been visiting affected sites since Thursday to donate clothing, food and cold water.

“People are having a very hard time, but the government should be doing this with our taxes, not us,” said volunteer Cem Taylan. “It was predictable. This is not fate, you can manage the harm these fires cause.”

In Kalemler village, Mitad Akca, 63, and his wife, Hatice Akca, 61, were packing a car in front of the ruins of their home with donations of vegetables and other food supplies from the Disaster and Emergency Management, or Afad.

They said the whole village had been destroyed three days previously in 45 minutes and the only thing that survived the heat was their jewellery.

“My tractor and everything else was burned – 50 years of work was gone in minutes. But Erdogan came today and told us the government will give us new tractors next week and houses within a year.”

‘As climate changes, fires will grow’

Hediye Gundiz, head of the environmental group A Platform, said the government was warned 15 years ago after the last unusually large fires in Manavgat that global warming would likely cause more, but nothing was done.

She said that as well as needing waterbombing planes to tackle fires quickly, the government should hold workshops to train residents of at-risk areas how to prevent fire.

“It takes one tree between 30 and 40 years to grow. It could take 50 years to recover what we had, but we don’t have the water we need for it like we used to,” she said.

This, however, is not the only recent sign that Turkey is struggling to cope with changing climates – in May, a lake in eastern Turkey’s Van province completely dried up. Migratory birds such as flamingos have been found dead en masse this year as their watering holes disappear, droughts have caused sinkholes in central Anatolia and, last week, six people were killed in flash floods in Turkey’s Black Sea region.

Since December last year, thick, unsightly “sea snot”, caused by rising sea temperatures and pollution, took over the Sea of Marmara, stifling tourism and stripping local fishers of their livelihoods.

Fire ecologist Ismail Bekker said that to recover from the fires, the key is not to replant as it might appear, but to leave the forests to their own devices.

“These Mediterranean ecosystems and fires have been like this for hundreds of thousands, or even millions, of years, albeit smaller,” he said, adding that strong forest protection laws in Turkey actually make disasters like this more likely.

While in some countries, such as the United States, controlled burns are used to clear the forest of dried leaves and other debris that act as fuel for fires Turkey does not allow them, leading to larger natural blazes that are hard to control.

“We need to include forests in urban planning as this disaster has shown that forest fires are now reaching a size where they can threaten urban areas,” he said.

“As the climate changes, it will get even hotter and the fires will grow.”