Five police officers in Florida have been charged with battery connected to the violent arrests of two Black men last week.

Surveillance video showed an officer chase Dalonta Crudup, 24, into the lobby of the Royal Palm Hotel in South Beach in the early morning hours of July 26. The officer ordered Crudup onto the ground at gunpoint, and Crudup complied. Moments later, more than a dozen other officers ran into the lobby to surround Crudup, who could be seen on the ground with his hands behind his back.

Despite being handcuffed and on the ground, Dalonta Crudup was kicked several times by two different officers, as seen on video. Five @MiamiBeachPD officers have been charged w/battery for rough arrests of Crudup and Khalid Vaughn last week at the Royal Palm Hotel. @wsvn pic.twitter.com/ABMC6kIiXW

The officers have been suspended and turned themselves in on Monday.

The incident comes amid a nationwide debate about policing in the United States, sparked largely by the May 2020 death of George Floyd, a Black man who suffocated under the knee of Derek Chauvin, a white police officer. Floyd’s death ignited protests over police brutality and racism in the country.

In April, a court found Chauvin guilty of murder and sentenced him to 22.5 years in prison.

“When we saw that kick to the head, and then we replayed it and we saw all the other kicks that preceded it. It was unfathomable. Unspeakable. Inexcusable, “ she said.

“I started recording it. They already got him in handcuffs. They beat him, turned around, charged me down, beat me … punched me, elbowed me in the face,” Vaughn told Miami’s Local 10 News on Monday. “I literally got jumped by officers,” he said.

The channel reported that Shariff Cobb, 27, also recorded the incident with his mobile phone and was arrested.

Officers said they initially followed Crudup into the hotel because he struck a bicycle patrol officer while driving a scooter recklessly. That officer was taken to a hospital for treatment of leg injuries. Crudup was charged with several counts, including aggravated battery on a law enforcement officer.

Charges against Vaughn of resisting an arrest with violence and impeding a police investigation have been dropped.

Crudup said he suffered from a black eye, blood on his chin and bruised ribs.

“I got beat up, got stitches, went to the hospital,” he told Local 10 News on July 27 after posting bond.

He said he did not realise that police officers were chasing him because he had headphones on and denied that he struck a police officer. 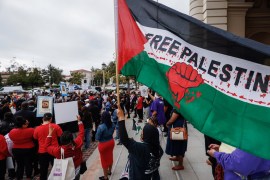 Is Black Lives Matter changing the US conversation on Palestine? 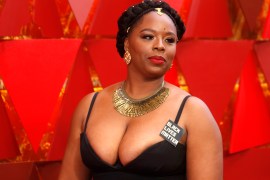 Black Lives Matter co-founder to step down amid criticism

Patrisse Cullors says ‘right-wing attacks’ nor criticism from Black organisers are reasons for her departure. 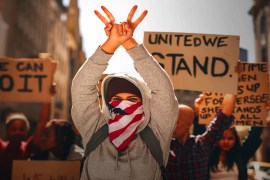