Tuesday’s performance marked a return to competition for Biles, who had previously withdrawn from the team all-around event, as well as all other individual gymnastics events, citing concerns over her mental health.

She later detailed that she was having difficulty locating herself in the air while performing the high-flying skills, a phenomenon known as “the twisties”.

Biles, who won four gold medals in the Rio Olympics, had entered the Tokyo Games with high expectations but has been praised by many fellow athletes for prioritising her mental health and drawing attention to the pressure put on young Olympians.

The 24-year-old, who is considered by many the best gymnast in history, had previously won a bronze in the balance beam in Rio.

On Tuesday, Guan took gold by scoring 14.633 for her routine. Eighteen-year-old Tang Xijing, also of China, took silver with 14.233.

Biles produced a strong 14.000 after a double pike dismount to take bronze, her seventh Olympic medal. The performance tied Biles with Shannon Miller for the most Olympic medals won by a US athlete in gymnastics.

Amid speculation over her possible retirement, Biles has hinted she may seek to compete in the 2024 Olympics. 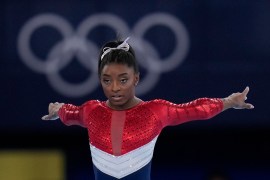 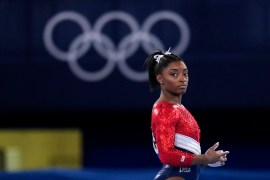 Biles was expected to be one of the headliners of the Tokyo Games in a bid for six gold medals.