A US drone attack struck a vehicle carrying “multiple suicide bombers” from ISIL’s (ISIS) Afghanistan affiliate before they could attack the ongoing military evacuation at Kabul’s international airport, American officials have said.

There were few initial details about the incident on Sunday, as well as a rocket that struck a neighbourhood near the airport which killed a child according to an Afghan police official.

The Taliban described the two attacks as separate incidents but residents of the Afghan capital heard only one large blast.

The air attack came as the United States winds down a historic airlift set to end by Tuesday that saw tens of thousands evacuated from Hamid Karzai International Airport (HKIA), the scene of much of the chaos that engulfed the Afghan capital since the Taliban took over two weeks ago.

Tensions have spiked since a suicide bombing at Kabul airport on Thursday that killed at least 175 people, including 13 US military personnel. The attack was claimed by the Islamic State in Khorasan Province, ISKP (ISIS-K), an ISIL affiliate.

US Navy Captain Bill Urban, a spokesman for the American military’s Central Command, called the latest drone attack an action taken in “self-defence”. He said authorities continued “assessing the possibilities of civilian casualties, though we have no indications at this time”.

“We are confident we successfully hit the target,” Urban said. “Significant secondary explosions from the vehicle indicated the presence of a substantial amount of explosive material.”

The Taliban also said a US missile attack was aimed at taking out suicide bombers.

“The vehicle and those inside it were killed in the drone strike,” Taliban spokesman Zabihullah Mujahid said.

Two US military officials, who spoke to The Associated Press (AP) news agency on condition of anonymity, called the air attack successful and said the vehicle carried multiple bombers.

The attack was the second by US forces since Thursday’s suicide bombing at Kabul airport.

The Pentagon said on Saturday that retaliatory drone attacks had killed two “high-level” ISKP targets in eastern Afghanistan but Biden warned of more attacks from the group.

“The situation on the ground continues to be extremely dangerous, and the threat of terrorist attacks on the airport remains high,” Biden said on Saturday.

“Our commanders informed me that an attack is highly likely in the next 24 to 36 hours.”

The US embassy in Kabul later released a warning of credible threats at specific areas of the airport, including access gates.

The US and allies have taken about 114,400 people – foreign nationals and vulnerable Afghans – out of the country in the past two weeks but tens of thousands who want to go will be left behind.

The US State Department released a statement signed by about 100 countries, as well as NATO and the European Union, saying they had received “assurances” from the Taliban that people with travel documents would still be able to leave the country freely.

The Taliban have said they will allow normal travel after the US withdrawal is completed on Tuesday and they assume control of the airport.

Meanwhile, an Afghan police chief said on Sunday a rocket struck a neighbourhood northwest of the main airport in Kabul, killing a child.

Rashid, a Kabul police chief who goes by one name, told AP that the rocket struck Khwaja Bughra neighbourhood on Sunday afternoon.

No group immediately claimed the attack.

Al Jazeera’s Charles Stratford, reporting from Kabul, said people in the neighbourhood also reported that a rocket hit a house.

“It comes at a time of increasing tension here, the closer we get to this evacuation deadline,” he said.

Stratford said a lot of unanswered questions remain regarding the blasts reported on Sunday.

“What does seem clear though is that the Taliban is struggling with what many analysts say could be an increasing threat from ISIL in this country, and seem to be heavily reliant on the Americans – American air power at least – to keep that threat at bay,” he said.

“And of course that has huge implications for when the last of the NATO forces, the Americans leave in what we believe will be in the next 48 hours.” 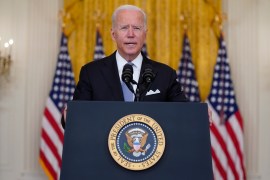 Pledge comes as the Taliban condemns US drone attack on ISKP as a ‘clear attack on Afghan territory’. 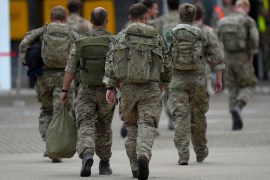 UK armed forces begin to leave Afghanistan and will take a small number of Afghans on remaining flights. 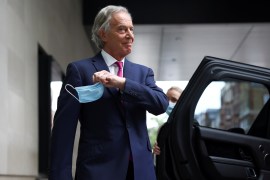 The former British PM should follow up by personal example on his calls not to abandon Afghanistan.