US President Joe Biden said “there may have been” a list of names of vulnerable Afghans given to the Taliban in an effort to facilitate United States evacuations from the country, as reported by an American news site.

Biden, speaking to reporters on Thursday after deadly twin bombings claimed by an ISIL (ISIS) affiliate near Kabul’s airport, said US forces have coordinated with the Taliban on several occasions to help bring evacuees to the airport.

However, he said he could not say with “any certitude that there’s actually been a list of names”.

“There may have been. But I know of no circumstance. It doesn’t mean that it doesn’t exist, that here’s the names of 12 people, they’re coming, let them through. It could very well have happened,” said Biden.

The comments came after Biden was asked about a Politico news site report on Thursday that said the US provided the names of American citizens, green-card holders, and Afghans eligible for expedited US visas to the Taliban to help those fleeing the country gain access to the airport.

One defence official excoriated the reported move, saying providing the names of Afghans who had supported the US government in the country amounted to giving the Taliban a “kill list”.

While the Taliban has said it would grant amnesty to Afghans who worked in support of foreign governments and organisations over the last 20 years, observers say the armed group – whose rule of the country from 1996 to 2001 was defined by draconian policies and summary executions – should not be trusted.

Meanwhile, a United Nations report warned last week the Taliban was intensifying its search for people who supported American and NATO forces.

Thursday’s comments came as the US, which controls Kabul airport, scrambled to complete as many evacuations as possible before a planned August 31 withdrawal.

Pentagon officials have said evacuations would continue despite the attack on Thursday, which represented one of the single most deadly days for US forces in the country since they entered Afghanistan in 2001.

It remained unclear how continuing threats of attack would affect access to the airport in the waning hours of the operation.

As of Thursday, the US said it evacuated or facilitated the evacuation of more than 100,000 people.

Monitors estimate as many as 250,000 Afghans remaining in the country may be eligible for expedited US visas. Their prospects of leaving Afghanistan after the US exit also remain unclear.

The list of Afghan names came up during a classified briefing of the US Congress, Politico reported, in which American officials were questioned on the close coordination between Washington and the Taliban amid the chaotic evacuation effort.

The situation developed rapidly after the Taliban took Kabul faster than even the most pessimistic US intelligence estimates.

Emily Horne, White House National Security Council spokesperson, sought to further downplay the threat posed to Afghans from US coordination with the Taliban.

“It is unfortunate that the White House was not asked for comment or explanation on such a serious issue,” said Horne.

“Had Politico asked us we would have given the same answer the president shared with the nation today: that in limited cases we have shared information with the Taliban that has successfully facilitated evacuations from Kabul.” 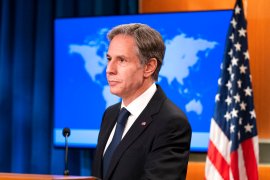 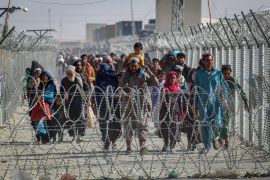 What will Afghanistan look like under Taliban rule (again)?

Fearful of Taliban rule, thousands are fleeing the country, while those who remain face uncertainty. 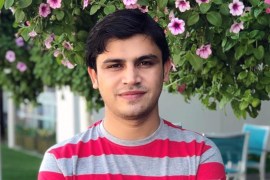