Kazakhstan has evacuated settlements located next to a military facility in its southern Jambyl province after it was rocked by a series of powerful blasts that wounded at least 60 people, authorities in the Central Asian nation have said.

The blasts followed a fire at the facility, where some engineering-purpose explosives were stored, deputy defence minister Ruslan Shpekbayev said on Thursday. Separately, traffic and railway authorities said they were closing off a road and a railway passing through the area.

Sixty people have been admitted to hospital with injuries from the blasts, the provincial government said, adding that the fire had yet to be put out.

❗🇰🇿 In Kazakhstan, an explosion occurred in a military unit – the Ministry of Defense of the Republic.

An explosion in Kazakhstan's Taraz occurred due to a fire near one of the warehouses in a military unit, the Ministry of Defense of the republic reports. pic.twitter.com/ay1TNvD2gc

President Kassym-Jomart Tokayev said in a series of tweets that at least 30 of the wounded were military servicemen or emergency workers and the incident was being investigated.

Residents of four villages, including one of 250 people less than a kilometre from the site of the blast, were being evacuated, a statement from the defence ministry said.

In 2019, four people were killed and dozens hurt in a similar accident in the Kazakh town of Arys in the adjacent Turkestan region, when blasts at a munitions depot forced authorities to evacuate the whole town of 44,000 people.

That blast was the third lethal explosion in the town’s vicinity in the space of a decade. 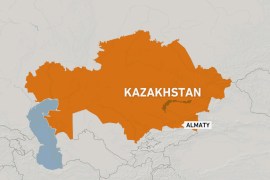 Four killed, two wounded as An-26 aircraft flying from Nur-Sultan crashes while landing in Almaty. 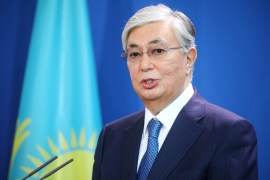 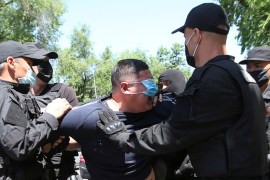 Police in Kazakhstan detained protesters calling for the release of political prisoners in line with an EU resolution.