US Vice President Kamala Harris has pledged to provide Vietnam with additional doses of COVID-19 vaccines during a regional visit aimed at countering China’s growing influence.

Harris, speaking at the top of a bilateral meeting with Vietnamese Prime Minister Pham Minh Chinh on Wednesday, said that the one million doses would begin to arrive within the next 24 hours.

The new coronavirus aid is part of a wide-ranging set of announcements on fresh partnerships and support for Vietnam delivered to coincide with Harris’s visit to the nation. The US vice president is on a week-long swing through Southeast Asia, a trip that also included a visit to Singapore earlier in the week.

During her meeting with Vietnamese President Ngyuen Xuan Phuc, Harris also expressed support for sending an additional US Coast Guard cutter to Vietnam, to help defend its security interests in the South China Sea and issued a sharp critique of Beijing’s incursions in the disputed waterway.

“We need to find ways to pressure and raise the pressure, frankly, on Beijing to abide by the United Nations Convention on the Law of the Sea, and to challenge its bullying and excessive maritime claims,” she said, adding that the US would “maintain a strong presence in the South China Sea” to challenge China.

Her comments follow sharp words towards Beijing during a speech in Singapore on Tuesday, where she said their actions in the South China Sea amount to “coercion” and “intimidation”.

China, Vietnam, Brunei, Malaysia, the Philippines and Taiwan, lay claim to parts of the South China Sea, which is crossed by vital shipping lanes and contains gas fields and rich fishing grounds. Beijing has established military outposts on artificial islands in the South China Sea and objects to foreign warships sailing through what it claims is its sovereign waters.

In 2016, the Hague-based Permanent Court of Arbitration ruled against China’s claim but Beijing has rejected the ruling.

Chinese state media have slammed Harris’s comments in Singapore, accusing the US vice president of seeking to drive a wedge between China and its Southeast Asian neighbours.

“While pointing a finger at China and accusing it of ‘coercion’ and ‘intimidation’, Harris willfully ignored her own hypocrisy in attempting to coerce and intimidate regional countries to join Washington in its scheme to contain China,” the state-run China Daily said in an editorial responding to Harris’s comments in Singapore.

Harris’s Singapore speech was a baseless attack on China, the editorial said. “It seems that the United States’ only commitment to Southeast Asia is its dedicated efforts to drive a wedge between the Southeast Asian nations and China,” it added.

The US has called rivalry with China “the biggest geopolitical test” of the century and Southeast Asia has seen a series of high-profile visits by top administration officials, including Secretary of Defense Lloyd Austin, who visited Hanoi in late July.

Harris’s arrival in Hanoi was delayed on Tuesday after the US Embassy in Vietnam said it had detected an “anomalous health incident”, potentially related to the mysterious Havana syndrome – a condition of unknown origin with symptoms including dizziness, nausea, migraines and memory lapses.

During the delay, Vietnam’s prime minister and China’s ambassador to Vietnam held a previously unannounced meeting, during which Chinh said Vietnam does not take sides in foreign policy. The Chinese ambassador promised a donation of two million COVID-19 vaccines during the meeting.

The vaccine pledges came as Vietnam is grappling with record-high coronavirus infections driven by the Delta variant and stubbornly low vaccination rates in the country. The surge in cases prompted a recent lockdown in Ho Chi Minh City, the nation’s business hub and the epicentre of the latest outbreak.

“The Prime Minister affirmed that Vietnam adheres to an independent, self-reliant, multilateral, and diverse foreign policy and is a responsible member of the international community,” the Vietnamese government said in a statement.

“Vietnam does not align itself with one country against another,” it said.

Territorial disputes in the South China Sea should be settled according to international law and “high-level common sense,” it said.

In Hanoi, Harris met with Vietnam’s top leaders and offered support in several key areas, including the enhancement of its maritime security and more US Navy ship visits to Vietnam.

She also announced the launch of a new Centers for Disease Control and Prevention (CDC) Southeast Asia regional office. The new CDC office will be one of four regional offices globally, and it is focused on collaborating with regional governments on research and training to deal with and prevent global health crises. 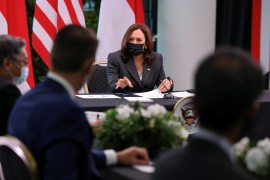 US Vice President says Washington’s partnerships in Southeast Asia and Indo-Pacific ‘are a top priority’. 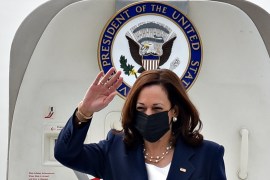 US vice president faces task of convincing Southeast Asia of US reliability amid its chaotic pullout from Afghanistan. 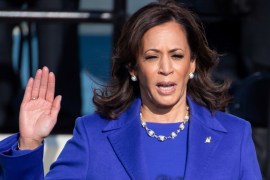 Harris was California’s first Black attorney general and the first woman of South Asian heritage elected to the Senate.