President Joe Biden will tell Israel’s Naftali Bennett that the US is looking to roll back Iran’s nuclear programme through diplomacy but also has “other avenues to pursue”, a senior US official told reporters ahead of the two leaders’ meeting.

Bennett, who is meeting Biden for the first time since becoming Israel’s prime minister, has voiced opposition to US efforts to restore the 2015 nuclear deal with Iran.

The administration official, briefing reporters ahead of Thursday’s talks between Biden and Bennett, faulted former President Donald Trump for nixing the multilateral agreement, which opened the door for Iran to accelerate its nuclear programme.

“Since the last administration left the Iran nuclear deal, Iran’s nuclear program has just dramatically broken out of the box, and it’s accelerating from week to week,” the official said.

“This is a very serious problem, and the two leaders, I think, will have the opportunity to sit together and discuss what to do about it.”

The deal, formally known as the Joint Comprehensive Plan of Action (JCPOA), granted Iran relief from international sanctions in exchange for scaling back its nuclear programme.

Trump left the agreement in 2018 and started piling sanctions on the Iranian economy as part of his “maximum pressure” campaign. Tehran responded by gradually loosening its commitments to the JCPOA, including limits on uranium enrichment.

Biden, who served as vice president to Barack Obama when the pact was signed, campaigned on restoring the agreement, but six rounds of indirect talks with Iran in Vienna earlier this year have failed to reinstate the JCPOA.

Bennett’s predecessor, Benjamin Netanyahu, was a fierce opponent of the agreement. The current Israeli prime minister has made it clear that his country’s stance has not changed.

Bennett told the New York Times earlier this week that he would present Biden with a new strategy to confront Iran, including by strengthening Israel’s alliance with some Arab countries and continuing covert Israeli attacks on Iranian nuclear facilities.

“What we need to do, and what we are doing, is forming a regional coalition of reasonable Arab countries, together with us, that will fend off and block this expansion and this desire for domination,” he said of Iran.

Earlier this week, State Department spokesperson Ned Price said the US is still committed to reviving the nuclear deal despite talks with Tehran stalling with a new conservative government taking office in Iran under President Ebrahim Raisi.

“We have made very clear that it remains profoundly in our national interest to seek to effect a mutual return to compliance of the JCPOA,” Price said.

On Wednesday, the administration official said while the US is “committed” to diplomacy with Iran, its approach is “multidimensional”.

The US thinks reviving the JCPOA is the best way to roll back the Iranian nuclear programme, ” but obviously if that doesn’t work, there are other avenues to pursue,” the official said.

“Our commitment to this partnership, to Israel’s security, is and always will be unshakable,” Blinken said ahead of the meeting. 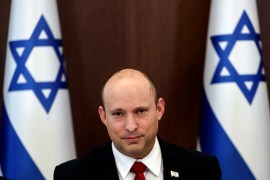 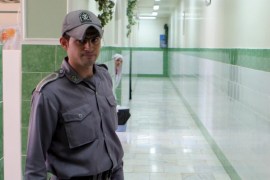 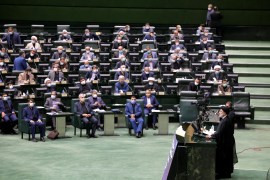 All except one of Iranian president’s cabinet member picks were approved with overwhelming support by parliament.