US President Joe Biden has pledged his “unwavering commitment” to get US citizens and at-risk Afghans out of Taliban-controlled Afghanistan but warned of hurdles ahead, including the threat of an attack from the ISIL-affiliated Islamic State in Khorasan Province, ISKP (ISIS-K).

In a briefing at the White House on Sunday, Biden said he has directed the US Department of State to contact Americans stranded in Afghanistan by phone, email and other means and that Washington had a plan to move them to the airport.

“We’re executing a plan to move groups of these Americans to safety and to safely and effectively move them to the airport compound. For security reasons, I’m not going to go into detail,” he said. “But I will say again today what I’ve said before: Any American who wants to get home will get home.”

Afghan allies of the West and vulnerable Afghans such as women activists and journalists would be helped too, he said. 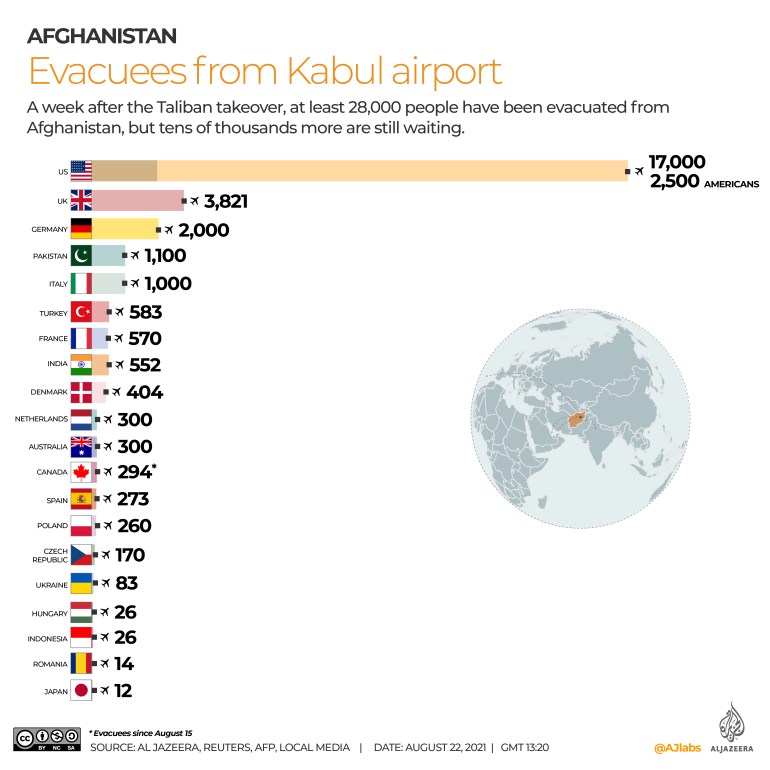 Biden acknowledged the searing scenes at the US-controlled Hamid Karzai International airport, which have included babies and children being passed to soldiers over razor-wire fences and men clinging to the outside of departing planes. But he said they were part of the cost of departure.

“Let me be clear, the evacuation of thousands from Kabul is going to be hard and painful” and would have been “no matter when it began”, the US leader said.

“We have a long way to go and a lot could still go wrong,” he added, citing the threat of an attack from ISKP in particular.

‘Take us with you’

Since August 14, the US-led airlift has evacuated 28,000 people, Biden said. That included 11,000 who had departed from Kabul in a 36-hour period this weekend, he said, but did not provide details.

Tens of thousands of people remain, waiting to join the airlift, which has been slowed by security issues and US bureaucracy hurdles.

On Sunday, Taliban fighters beat back thousands gathered outside Kabul airport, desperate to flee, but witnesses said they had not seen anyone sustain significant injuries. The British defence ministry said seven Afghans were killed in a crush at the gates on Sunday, while a NATO official said at least 20 people have died in the past seven days in and around the airport. Witnesses said the victims died by gunshot wounds or in stampedes.

A journalist, who was among a group of media workers and academics fortunate enough to reach the airport on Sunday, described desperate scenes of people surrounding their bus on the way in.

Due to the distress caused by the evacuation, an Afghan woman went into labour on a US Air Force flight and gave birth to a baby girl in the plane’s cargo bay moments after landing at a base in Germany, the Air Mobility Command tweeted.

The US military is currently controlling air traffic on the civilian and military sides of the airport and Biden asserted, without a full explanation, that US forces have managed to improve access to the airport for Americans and others seeking to get on flights. He suggested that the perimeter had been extended, widening a “safe zone”.

Asked by a reporter whether the US would extend an August 31 deadline for evacuations, Biden replied: “Our hope is we will not have to extend but there are going to be discussions I suspect on how far along we are in the process.”

Earlier on Sunday, senior US officials said the Pentagon was considering “creative ways” to get Americans and others into the Kabul airport for an evacuation amid concerns over security threats from Afghan armed groups, including ISKP, that may attempt to exploit the chaos around the airfield.

“The threat is real, it is acute, it is persistent and something we’re focused with every tool in our arsenal,” said Jake Sullivan, Biden’s national security adviser.

He told broadcaster CNN’s State of the Union show that US commanders were using “a wide variety of capabilities” to defend against a potential attack.

“It is something that we are placing paramount priority on stopping or disrupting,” Sullivan said. “And we will do everything that we can for as long as we are on the ground to keep that from happening. But we are taking it absolutely deadly seriously.”

In a notice on Sunday, the US Department of State urged people seeking to leave Afghanistan as part of an organised private evacuation effort not to come to the Kabul airport “until you have received specific instructions” to do so from the US Embassy’s flight organiser. The notice said that others, including American citizens, who have received specific instructions from the embassy to make their way to the airport should do so.

A central problem in the evacuation operation is processing evacuees once they reach other countries in the region and in Europe. Those temporary way stations, including in Qatar, Bahrain and Germany, are sometimes reaching full capacity, although new sites are being made available, including in Spain.

In an attempt to alleviate that and to free up military aircraft for missions from Kabul, the Pentagon on Sunday activated the Civil Reserve Air Fleet.

The US Department of Defense said 18 aircraft from American Airlines, Atlas Air, Delta Air Lines, Omni Air, Hawaiian Airlines and United Airlines will be directed to ferry evacuees from interim way stations. The airlines will not fly into Afghanistan.

Resistance to the Taliban

The crisis in Afghanistan has seen mounting criticism of the US and its Western allies, who this year pressed on with the troop withdrawal as government and security forces struggled to contain rising Taliban violence.

G7 leaders will discuss the situation at a virtual summit on Tuesday.

Britain plans to push world leaders to consider new sanctions on the Taliban when the G7 meets, sources told the Reuters news agency. Biden said he would support that effort, depending on the conduct of the Taliban.

Leaders of the armed group, who have sought to show a more moderate face since capturing Kabul, have begun talks on forming a government.

They face opposition from forces in northern Afghanistan, which said this weekend they had taken three districts close to the Panjshir Valley.

Anti-Taliban leader Ahmad Massoud said on Sunday he hoped to hold peace talks with the movement but that his forces in the Panjshir – remnants of army units, special forces and militiamen – were ready to fight.

“We want to make the Taliban realise that the only way forward is through negotiation,” he said. “We do not want a war to break out.”

The Taliban said on their Arabic Twitter account on Sunday they were sending hundreds of fighters to the valley after “local state officials refused to hand it over peacefully”.