Saturday night in Las Vegas will be a massive occasion for World Wrestling Entertainment. The promotion expects to host its biggest crowd since the start of the pandemic, with more than 40,000 fans set to pack Allegiant Stadium.

But moreover, SummerSlam will be a landmark moment for racial diversity. The event is set to feature title defences by one of WWE’s most ethnically mixed selection of champions, on a single night.

There will be three Samoan Americans, two African Americans, and a wrestler of Nigerian origin primed to walk into SummerSlam with title belts; while a Latino superstar will receive a title shot with a realistic chance of success; and a Canadian of Indian origin is involved a marquee match.

That man is former WWE Champion Jinder Mahal. The “Modern Day Maharaja”, as he’s known, told Al Jazeera it was an “awesome feeling” to be part of such a monumental show.

“You look at the whole landscape of WWE, we have superstars from all over the world. I think that’s what makes us a very unique entertainment entity.

“Our characters are from a wide range of backgrounds. We have wrestlers from different parts of the world going at it. It makes the matches really cool.”

In recent years the level of diversity in the WWE locker room has grown significantly, along with its positioning of non-white wrestlers as main event stars.

Previously, however, the company received a sizeable amount of criticism concerning issues of race.

For instance, since the Capitol Wrestling Corporation, which later transformed into WWE, came into existence in 1953, there had only been three Black world champions heading into 2019.

Since then, however, two more names have been added to that list. Kofi Kingston and reigning WWE champion Bobby Lashley.

Furthermore, the American-based promotion also faced criticism for its portrayal of a number of wrestlers with foreign roots, sometimes framing them as the enemy.

A famous example of this was General Adnan, a character who appeared during the first Gulf War. He was cast as a sworn adversary of the US and dressed in military regalia, he would pledge his allegiance to God in Arabic and regularly goad the American crowd.

From 2003 onwards, there was French Canadian tag team La Resistance. The pairing of Sylvain Grenier and René Duprée would regularly criticise US foreign policy in an attempt to provoke hostile reactions from the audience.

WWE, however, has realised such characters are becoming outdated. That is the view of one of the performers on the SummerSlam card, Damian Priest.

The American of Puerto Rican origin, who himself is challenging for a title on Saturday, told Al Jazeera “back then it worked. It doesn’t work now.

Forbes pro-wrestling columnist Alfred Konuwa said WWE’s positive approach to diversity is very much in line with its global business strategy, which has seen the company make its programming available in more than 180 countries and 28 languages.

“WWE thrived with Mexican audiences when it really got behind Rey Mysterio and Eddie Guerrero, and there are countless examples of WWE pushing a wide variety of talent in various territories due to their drawing power in a certain demographic,” Konuwa said.

“It should always be a priority simply to offer as much variety as possible”.

This variety is something Irish star Sheamus believes is of high importance.

Ahead of his US title defence against Priest, he told Al Jazeera: “There’s someone in WWE for fans watching from anywhere. There are superstars, male and female, that our fans can look up to and attach themselves to.”

WWE’s diversity push is particularly significant given the current pro-wrestling landscape in the US, with its main competitor All Elite Wrestling seemingly choosing so far not to capitalise on the wealth of racially diverse talent at its disposal.

“It’s pretty much night and day,” said Konuwa, speaking of the promotion founded in 2019.

“In recent years WWE learned and adapted to naturally incorporating diversity in a way that does not at all seem forced, while AEW has a lot of work to do in fostering an environment where it seems like the biggest opportunities can happen among more than simply the predominately white talent that they push as top stars.”

WWE has indeed done a lot of work in recent years on the diversity front. The question is how far the drive can go?

For now, however, pro-wrestling fans from across the world can look forward to a Las Vegas spectacle that has already pushed the boundaries – even before the first bell has rung. 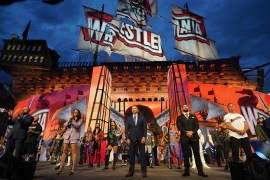 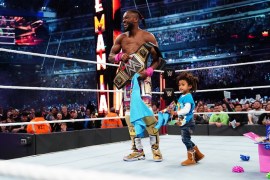 Kingston’s 11-year-long career at pro wrestling’s biggest promotion has been filled with setbacks and near misses. 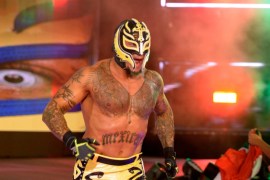 In the age of Donald Trump, a prominent Mexican-American wrestler hopes to promote Latino pride.