The Israeli military launched air raids on Gaza following clashes between its soldiers and Palestinian protesters during a demonstration to commemorate the burning of Jerusalem’s Al-Aqsa Mosque 52 years ago.

In a statement late on Saturday, the Israeli military said it struck four weapons manufacturing and storage sites in Gaza belonging to Hamas, the group that governs the besieged Palestinian enclave. Eleven Palestinians were reportedly wounded.

The raids came hours after Israeli soldiers opened fire on crowds of young Palestinians protesting at the fence separating Gaza and Israel.

The Palestinian health ministry said dozens of people were wounded, including a 13-year-old Palestinian boy who was shot in the head.

“Forty-one civilians were wounded with various injuries,” the ministry said in a statement.

The Israeli military called the protesters “rioters” and said some had tried to climb the border fence and hurled “explosive devices” at its soldiers.

The military said it “responded with riot dispersal means, including when necessary live fire”.

The Israel border police said a 21-year-old sniper in its undercover unit was critically wounded when he was shot by a Palestinian protester. “His condition is critical and there is a risk to his life,” it said.

Al Jazeera’s Youmna al-Sayed, reporting from Gaza, said at least 10 of the Palestinians wounded were children and two were in a critical condition.

She said Palestinian factions had urged a peaceful commemoration ahead of the demonstration, while “Hamas called out the Israeli occupation forces’ excessive force against unarmed civilians as a regular thing Israel is used to”.

The group also “said the Palestinians will continue to send messages that they will not allow the Israeli forces to continue imposing the siege on the Gaza Strip and its people”, she added.

Late on Saturday, Hamas and other groups in Gaza issued a joint statement in which they “saluted the heroic youth” who clashed with Israeli forces.

The violence was some of the worst since a deadly assault by Israel on the Gaza Strip in May.

Over 11 days that month, Israel pounded Gaza with air attacks in response to rocket fire from the enclave. Hamas and other groups said they took action after Israeli forces violently stormed the Al-Aqsa Mosque compound several times, including on the holiest night of Ramadan.

At least 260 Palestinians, including 67 children, and 13 Israelis were killed in the fighting.

The conflict ended with a ceasefire on May 21 but reconstruction in Gaza has stalled, in part because of a crippling blockade Israel has maintained on the enclave since Hamas seized power in 2007.

The violence on Saturday was the most serious during Palestinian demonstrations since the end of the weekly March of Return organised near the border between the eastern Gaza Strip and Israel.

The protests ended in 2019 after Egypt, Qatar, and the United Nations mediated an agreement between Israel and Hamas, with Israel agreeing to relax its blockade.

The new Israeli government, headed by Naftali Bennett, has blocked aid from Qatar, calling for a mechanism to ensure Hamas does not benefit from the cash.

It has also blocked the import of key reconstruction materials while demanding that Hamas first return the remains of two soldiers killed in a 2014 war and two Israeli civilians believed to be alive.

On Thursday, however, Israel announced an agreement with Qatar to resume aid payments to thousands of families in the Gaza Strip.

Under the new arrangement, the funds are to be transferred by the UN directly to Gaza families, while giving Israel oversight over the list of recipients. The payments are expected to begin in the coming weeks.

Naji Sarhan, undersecretary of the ministry of public works and housing in Gaza, said direct damage from the Israeli attacks on Gaza in May stood at $479m.

‘Ordinary citizens who have been affected by the war are waiting to return to life before the war, to have a home again and have their jobs back,” said Sami Saqallah, a Gaza resident.

“This is what I and every affected citizen are asking for. We urgently demand that the rebuilding happens quickly.” 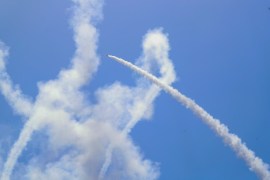 Rocket fired at Israel from Gaza; first since May assault 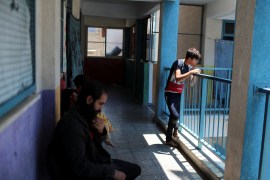 After being hit by Israeli air strikes, two UN schools had to relocate thousands of students. 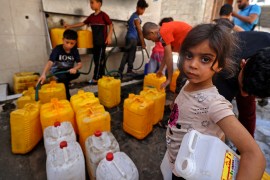 Qatar has provided hundreds of millions of dollars to Gaza’s poorest families in recent years.