Kabul, Afghanistan – Hashmat Ghani, brother of Afghanistan’s deposed President Ashraf Ghani, says he has accepted the Taliban’s takeover of the country but has called for the formation of an inclusive government.

Speaking to Al Jazeera from his west Kabul home on Saturday, Ghani said acknowledging the new order in Kabul was a necessity “for the people of Afghanistan” at a time when foreign forces are only days away from their final withdrawal.

Ghani, a businessman and grand chieftain of Afghanistan’s nomadic Kochi population, has been meeting Taliban leaders for the past several days. He said he agreed to recognise the transition of power as a signal to influential political and cultural figures, as well as businesspeople.

He said if businesspeople who had invested millions in schools, hospitals, stores, universities and other entrepreneurial efforts joined the tens of thousands of people trying to flee the country it would be “devastating” to the country’s economy and overall future.

Though his brother, the former president, fled on August 15, the younger Ghani says he never had any intention to leave the country.

“If I were to flee there what would become of my people, my tribe … My roots are here, what kind of message would that send if I just fled and left my people in their time of need?” he said.

Of his brother’s absconding, Ghani says he is glad the former president at least left with his life intact.

“If he had gotten assassinated or killed in any way, things would have gotten much worse.”

Meanwhile, the pictures and paintings in Hashmat Ghani’s house remain untouched, as do the large, flatscreen televisions. During its rule from 1996 to 2001, the Taliban banned television and any art depicting people and television. One of Ghani’s paintings even depicts the chasm left behind after the group blew up the ancient Buddha statues in the central province of Bamiyan in 2001.

Ghani said it is important to bridge divides in Afghan society; which means the Taliban finding a way to accept modern amenities and advancements, and younger Afghans and opponents of the group being able to engage with the Taliban, whom many of them had likely never seen up close until last week.

“When you haven’t been around certain kinds of people, appearances can be deceiving or even frightening,” Ghani said.

The Taliban has said it will protect women’s rights and set up an inclusive government. But many fear a return to repressive rule and a United Nations report said the Taliban has been conducting “targeted door-to-door visits” of people who worked with foreign forces.

Footage of Ghani meeting with members of the Taliban has spread across Afghan social media and has resulted in some critical and abusive comments.

He acknowledges the fear that hangs over the capital, but stressed the need for an inclusive government that would include experts in their fields, women and young people. That, he said, will be the way to ease tensions.

‘We can’t go back to death and destruction’

In the initial days of the Taliban takeover, the city was at a standstill as few people, especially women, dared to step out of their houses.

For the first four days, most of the businesses in the city remained shut due to the uncertainty and fear of riots or violence. But as the days wore on, the crowds grew bigger, traffic returned to the streets and some women and young people ventured back out.

So far, businesses in Kabul and other cities have slowly started to reopen, but with banks struggling to open and replenish cash supplies in ATMs, there is a big shortage of physical currency in circulation.

Afghanistan’s economy had already been struggling due to corruption, cuts in foreign aid and a near run on the banks in the days prior to the Taliban’s arrival last week.

Ghani says the Taliban must do everything they can to engage with entrepreneurs and investors as, in a cash-based economy, this mix of business closures and a lack of paper money can lead to a serious economic shock.

Throughout Saturday afternoon, Ghani could be heard responding to WhatsApp voice messages in Pashto, Dari and English, trying to encourage investors and leading figures not to give up hope or worse, abandon the country in its hour of need.

“We can’t let this country go back to death and destruction,” he could be heard saying into his iPhone as message after message came in from Afghanistan and abroad.

Meanwhile, the Taliban has yet to announce the official formation of a new government and Ghani said the group’s leadership has openly acknowledged to him that they need assistance in running the country.

He said it is vital that capable and well-educated people remain open to working with a potential Taliban government.

“[The Taliban] know security. They can handle that very well, but a government is more than security, and that’s where the educated classes can help,” he told Al Jazeera.

Now that the Taliban has arrived in Kabul, Ghani’s biggest fear is a repeat of the civil war that nearly destroyed Kabul in the 1990s. To avoid this, he says the leadership of the country should reach out to the Taliban for a peaceful resolution. This includes influential figures from all of the nation’s ethnicities and geographic regions.

Throughout the day Al Jazeera spent with him, Ghani held face-to-face meetings with entrepreneurs and former government officials to encourage them not to give up on the country and to rise to the occasion.

“This is the hour of the need of the Afghans,” he said. 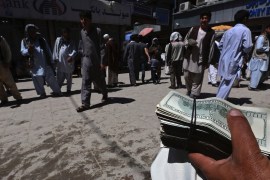 The Taliban economy: Can Afghanistan avert a financial collapse?

Without cash deliveries and its impounded international reserves, banks could fold and civil servants could go unpaid. 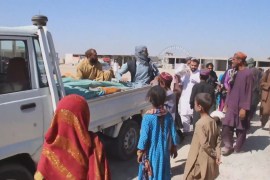 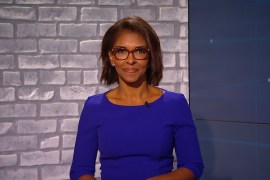 A look back at some of the conversations before and after the Taliban’s rise to power. 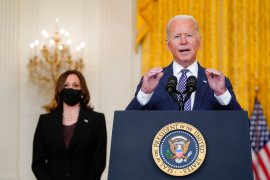 Biden vows to evacuate Americans and US allies from Afghanistan

Biden lauds US operation at Kabul airport and says evacuation flights are resuming after hours-long pause on Friday.