Thousands of Gurkhas, who are renowned as hard and loyal fighters, have served in the British army but until 2007, did not enjoy the same pay and conditions as British soldiers.

Those who served before 1997 still receive only a fraction of their British counterparts’ salary as it was assumed they would return to Nepal after leaving the army, where the cost of living is significantly lower.

Gurkha veterans previously lost a legal challenge against the situation, and say it has left some 25,000 older Nepalese veterans out of pocket.

The Gurka Equal Rights group tweeted that on Thursday, British officials agreed to talks with the Nepalese Embassy over the issue.

“The hunger strike has now been called off! Thank you everyone for your support and love,” the group said.

The hunger strike is over, but the next battle has just begun in the 30+ year war for equal rights. Preparations for dialogue will begun on Sept 8, to schedule a meeting in December with the British and Nepali governemnts, and Gurkha veterans. 1/8 pic.twitter.com/bzTnBYartW

The UK’s Ministry of Defence said it was “happy” the group ended the strike and that it looked forward “to meeting with the group next month alongside the Nepali Ambassador to move forward together”.

“Our primary concern is always the health and welfare of our serving personnel and veterans, and this strike was not a course of action we encouraged,” the ministry said in a statement.

One protester, Dhan Gurung, was taken to hospital on Wednesday. His wife, Dev Kumari Gurung, dismissed reports he had a heart attack.

He had been feeling weak and had high blood pressure but was determined to carry on, she told the AFP news agency.

Surrounded by flowers and candles left by supporters, the demonstrators wanted the government to resolve their complaints about alleged discrimination and inequalities.

The Gurkhas have become renowned for their loyalty and bravery since they first served as part of the Indian army in British-ruled India in 1815.

Some 200,000 Gurkhas fought alongside British troops in both world wars, as well as the conflicts in the Falklands, Iraq and Afghanistan.

There are about 2,700 Gurkhas currently enlisted in Britain’s armed forces. 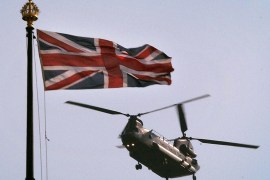 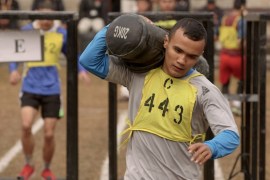 As thousands of young Nepalese men battle through grueling physical tests, we discover what it takes to become a Gurkha. 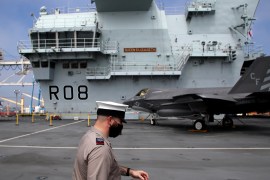