In recent weeks, the devastating effects of wildfires, which have killed more than 100 people and rendered thousands homeless, have been dominating headlines around the world.

Several countries have reported their worst fires in decades, including hundreds of deadly fires across the Mediterranean. In Algeria, at least 90 people have been killed.

California’s Dixie fire – the second-largest in the state’s history, and Siberia’s wildfires are being touted as some of the largest fires in recorded history.

According to the European Space Agency, “fire affects an estimated four million square kilometres (1.5 million sq miles) of Earth’s land each year”. To put that in context, that is about half the size of the United States, larger than India, or roughly four times the size of Nigeria.

To measure the size and impact these fires have on climate, vegetation and atmosphere, scientists use observations from several low Earth-orbit satellites, including the Copernicus Sentinel-3. It gathers shortwave-infrared data combined with other techniques to differentiate between burned areas and other low reflectance covers such as clouds.

Wildfires on the rise

While wildfires are a natural part of many environments as a way to clear out dead underbrush and restore nutrients, scientists have warned that they are becoming more frequent and more widespread.

In August, an alarming UN report blamed human activity for “unprecedented” changes to the climate. Scientists from across the globe said humanity will experience more extreme weather in the coming years and will suffer the consequences of rising sea levels and melting Arctic ice.

According to the Center for Research on the Epidemiology of Disasters, at least 470 wildfire disasters – incidents that killed 10 or more people or affected more than 100 – have been reported globally since 1911, causing at least $120bn in damages.

A heatwave across southern Europe, fed by hot air from Africa, has led to wildfires across the region. Hundreds of fires have raged from Algeria to Jerusalem in the past month.

In Turkey, at least eight people have been killed since July 28 when hundreds of fires swept through the south. President Recep Tayyip Erdogan declared the regions affected by the fires as “disaster areas” and described them as the “worst wildfires” in the country’s history.

According to Husrev Ozkara, vice-chair of the Turkish Foresters Association, an average of 2,600 fires have erupted across the country every year during the last decade. In 2020, that figure jumped to almost 3,400.

In neighbouring Greece, more than 500 fires forced the evacuation of thousands of people as forests were scorched by wildfires in Evia, Peloponnese, and Attica, including around the capital Athens. Two people were reportedly killed and at least 20 others injured.

Prime Minister Kyriakos Mitsotakis said the fires in Greece are unmistakably linked “to the reality of climate change”.

In Italy, firefighters have battled more than 500 blazes in Sicily and the southern Calabria region. At least two people have died.

On August 12, a monitoring station in Sicily reported temperatures of 48.8C (119.8F) – levels some scientists believe could be the highest in European history. Christian Solinas, president of the Sardinia region, called the fires an “unprecedented disaster”.

Fires have also raged in the south of France, killing at least two people on Wednesday near Saint-Tropez, a resort region known for its forests, vineyards and tourism.

French President Emmanuel Macron, who had been holidaying nearby, visited the fire zone on Tuesday. He said the destroyed landscape was “absolutely terrible in terms of biodiversity and of natural heritage … but lives had been protected”.

In Algeria, at least 90 people, including 33 soldiers, have been killed in wildfires, according to local authorities.

President Abdelmadjid Tebboune declared three days of national mourning for the deadliest fires in the nation’s history. Authorities have blamed arsonists and “criminals” for the outbreaks and arrested dozens.

In Lebanon, wildfires spread through the forests in the Akkar region in late July. A 15-year-old who was helping firefighters put out the blaze was killed.

In Jerusalem, some of the worst fires in the region’s history were contained on Wednesday following a three-day firefight by Palestinian firefighters and the Israeli Air Force. No serious injuries were reported.

Wildfires have also flared up around the Mediterranean basin, including in Spain, Portugal and Morocco.

In the US, California’s Dixie Fire has been raging since mid-July. California fire authorities announced on Tuesday that the wildfire now spanned 253,637 hectares (626,751 acres) and remained 31-percent contained. 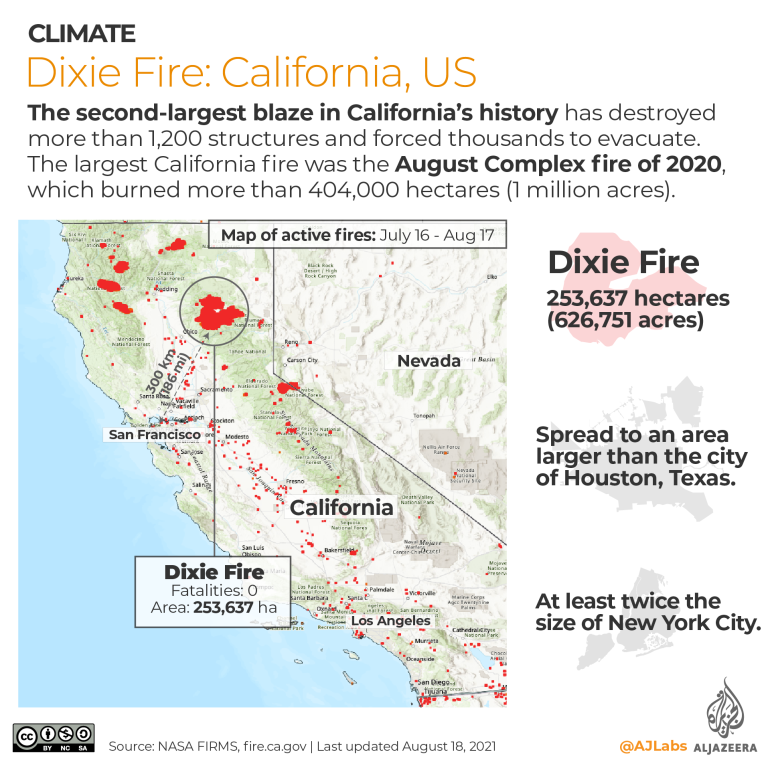 The fire is currently the second-largest blaze in California’s history and has destroyed more than 1,200 structures. It has burned an area larger than the city of Houston, Texas or at least twice the size of New York City.

Only the August Complex fire of 2020, which consumed more than 404,685 hectares (one million acres) in California, was larger.

In neighbouring Canada, hundreds of fires also swept across the country following record-setting temperatures in July.

In Russia, uncontrollable blazes have consumed thousands of kilometres of Siberia’s vast coniferous forests in the country’s largest and coldest region.

According to  Alexey Yaroshenko, Greenpeace Russia’s forestry head, the largest of these fires has exceeded 1.5 million hectares (3.7 million acres) in size.

The environmental group bases its figures on statistics from Russia’s fire services.

According to the Washington Post, Siberia’s wildfires are now larger than the rest of the world’s blazes combined.

The deadliest fires in history

According to the Centre for Research on the Epidemiology of Disasters, since 1911, wildfires have killed at least 4,545 people, injured 11,379 and affected more than 17 million around the world.

Minnesota’s Cloquet fire of 1918 is the deadliest on record, killing an estimated 1,000 people (including those missing).