By Alia Chughtai and Hashmat Moslih

The Taliban intends to replace the Afghan national flag with their white banner bearing the Shahada “La ilah ila Allah, Mohammad rasoul Allah” (There is no god but God and Muhammad is God’s messenger) after retaking the country on Sunday.

The removal of the Afghan flag has triggered protests in at least two Afghan cities, with at least three people killed in the eastern city of Jalalabad during an anti-Taliban protest. In a video that went viral on social media, protesters in Jalalabad tried to place the government flag on a crowded street’s pedestrian bridge after it was replaced with the Taliban banner.

This is not the first time Afghanistan’s flag has changed.

Since the Emirate of Afghanistan became fully independent from Britain more than 100 years ago, its flag has changed at least 18 times.

Here’s the story of how Afghanistan’s flag has evolved over the past 100 years. 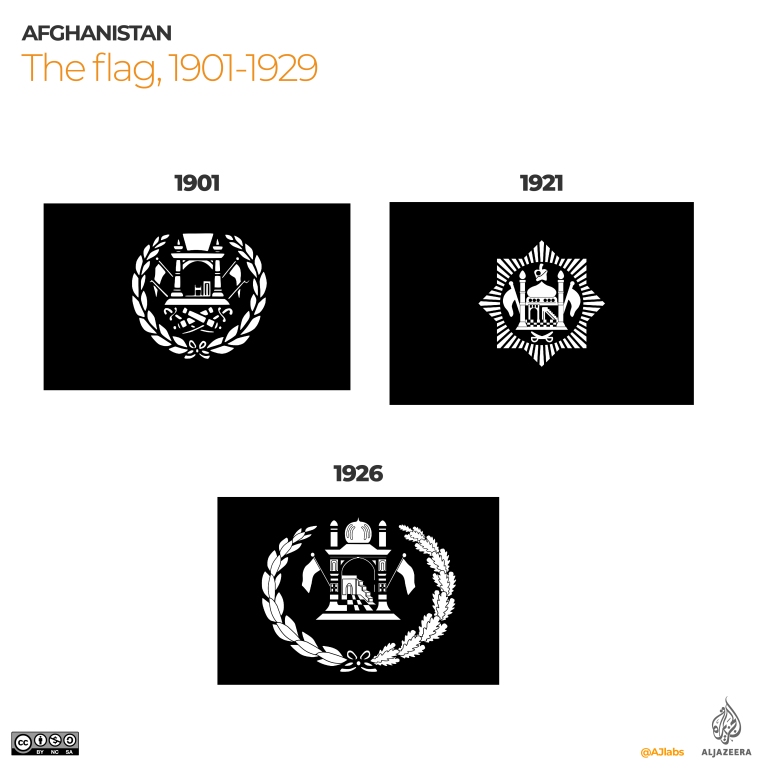 Habibullah Khan rules the Emirate of Afghanistan, a British protectorate. He modifies his father’s solid black flag with a seal showing a mosque above two crossed swords, encircled by a wreath.

The Emirate of Afghanistan becomes fully independent from Britain under Prince Amanullah Khan. The mosque at the centre of the seal is a recurring symbol, as are the crossed swords. Amanullah replaces the wreath with a radiating octagram and makes the swords smaller.

King Amanullah declares the Kingdom of Afghanistan in 1926. The flag and emblem change. The octagram is replaced with a wreath, the swords are removed and the mosque now highlights the mihrab (prayer niche) facing Mecca. Amanullah has several flags times during his reign. 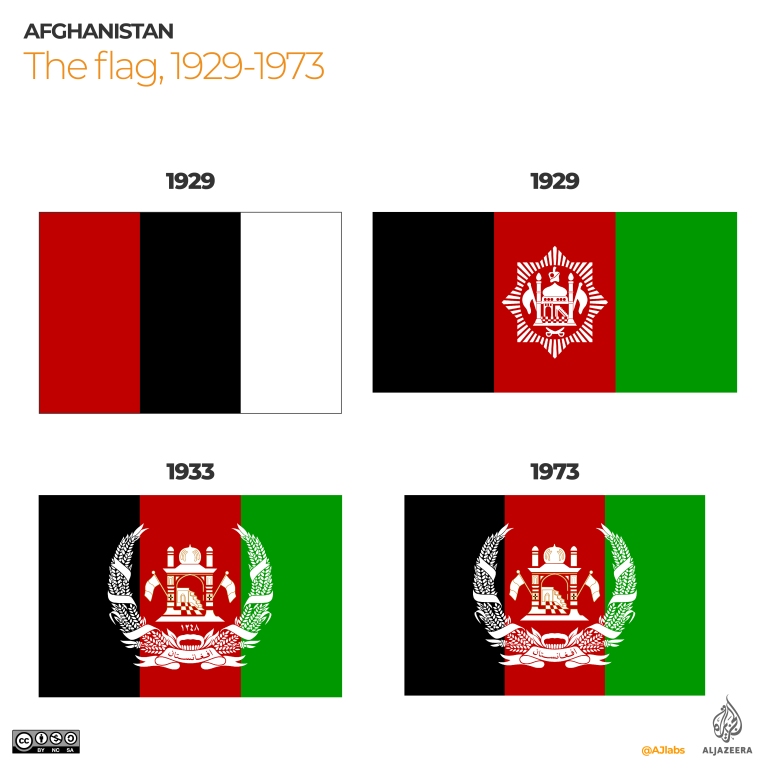 Amanullah flees an uprising against him, crowning his brother who abdicates a few days later. Afghanistan becomes an emirate under Habibullah Kalakani. The flag changes to a tricolour similar to a flag flown by invading Mongol forces in the 13th century.

Amanullah’s cousin Mohammed Nadir Shah leads a tribal rebellion, declaring a kingdom once more under him. The flag reverts to a tricolour flown briefly under Amanullah, black for the past, red representing the blood shed for freedom, and green, prosperity. Amanullah’s original seal is at the centre.

Nadir is assassinated, his son Mohammed Zahir becomes king, bringing stability. He keeps his father’s last flag. In it, the seal changes, with the mosque from the kingdom’s first flag above the Hijri year Nadir’s rule began, surrounded by sheaves of wheat.

Zahir’s cousin Mohammed Daoud Khan overthrows him in a military coup and makes Afghanistan a republic under him. For nearly a year, the flag stays mostly the same, with the removal of Nadir’s dynastic date. 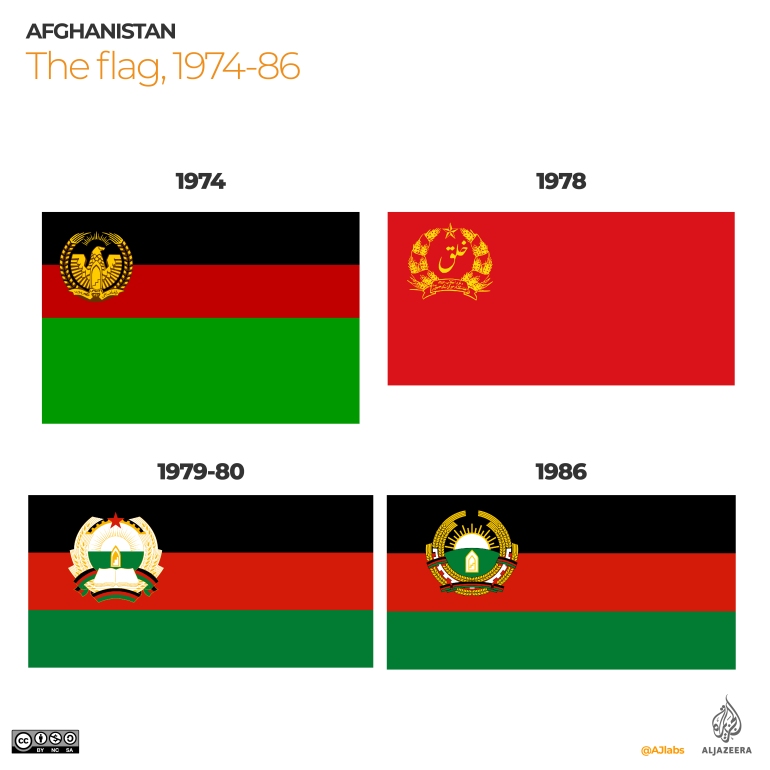 The republic’s flag changes, keeping the colours but changing their orientation. An eagle in the corner spreads its wings to show the mihrab on its chest and is surrounded by sheaves of wheat.

Daoud is killed in a communist coup, Nur Mohammad Taraki becomes president. At first, the seal is dropped from the flag, then it changes to a red flag with a seal in the corner. The word “Khalq” (people) is surrounded by wheat and a ribbon praising the coup underneath. Praise aside, the people are unhappy with their rulers, and the country becomes unstable.

Taraki is killed in September 1979 by Hafizullah Amin, who takes over. The USSR invades in December to “support” the communist regime, making Babrak Karmal president. The flag and seal change in 1980. The new seal is a sun rising over a mihrab on a green field with an open book. A red communist star and a cogwheel representing industry are at the top of a wheat wreath.

Karmal is removed, Mohammad Najibullah becomes president of a Soviet puppet state. Resistance to the government and the Soviets grows within a force of about 90,000 Mujahideen fighters. The seal changes, removing the red star and book (thought to be the Communist Manifesto) and moving the cog down. 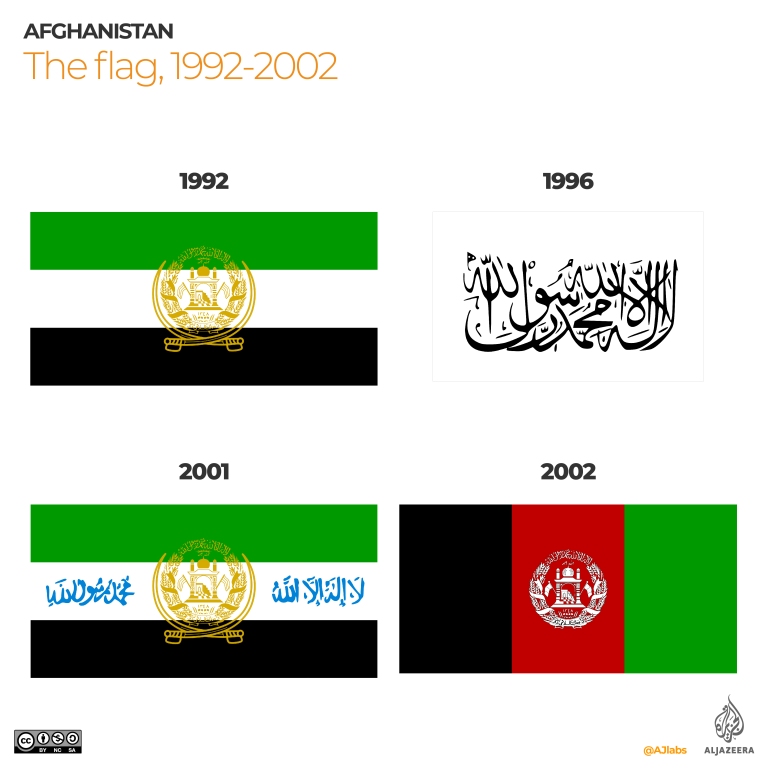 Three years after the Soviets leave, Ahmad Shah Massoud’s Mujahideen take Kabul. In June, Burhanuddin Rabbani becomes president of an Islamic state. In December, the flag changes. The colours resemble flags of many other Muslim countries, the seal is Amanullah’s mosque and Nadir’s wheat, swords representing a Mujahideen victory surround it and the Shahada is on top.

Unhappiness with Rabbani’s rule increases and a coup is attempted in January, weakening his government. The Taliban appears in October, promising peace. It soon captures the southwest and marches on Kabul.

The Taliban captures Kabul after two years of fighting, declares Afghanistan an Islamic emirate, and changes the flag to solid white initially, then adds the Shahada written in black a year later.

In 1997, al-Qaeda leader Osama bin Laden returns to Afghanistan and becomes close to Mullah Omar, leader of the Taliban.

Hijackers crash four commercial aeroplanes into the World Trade Center in New York, the Pentagon and a Pennsylvania field.

The US blames al-Qaeda and demands bin Laden from the Taliban, which says it will give him to a neutral country. The US refuses and, with the UK, starts to bomb Afghanistan in October.

The anti-Taliban Northern Alliance, including Rabbani’s government, captures Kabul from the Taliban. Rabbani’s flag and seal are reinstated with the Shahada added in blue. The Taliban withdraws to execute a long campaign against Western forces and the Kabul government.

A month after Hamid Karzai is tapped to lead the US-backed transitional government for two years, the flag reverts to the colours of the Zaher era and the emblem to the 1992 emblem with the swords removed. A Loya Jirga (Afghan grand assembly) in June makes the emblem gold instead of white. 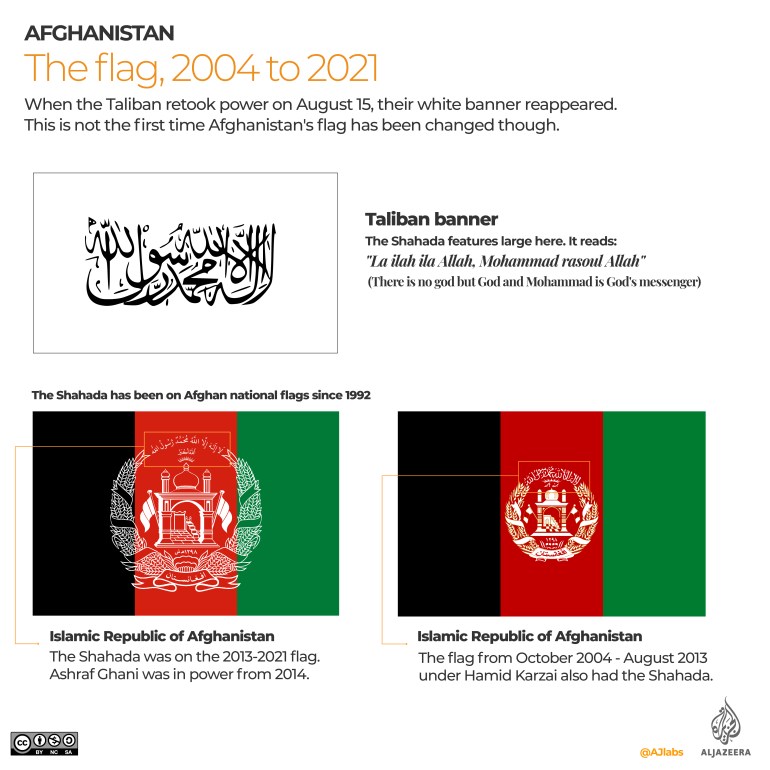 Towards the end of Karzai’s rule, a tweaked flag is unveiled. The white emblem is larger, overlapping the black and green bands, and some details were added.

Ashraf Ghani becomes president after two rounds of voting in elections bitterly disputed by his rival, Abdullah Abdullah. The scenario repeats in September 2019.

The US and the Taliban signed an “agreement for bringing peace” to Afghanistan after more than 18 years of war.

US and NATO forces begin to withdraw from Afghanistan in July, leaving a power vacuum that facilitated a Taliban advance. In August, Ghani flees Afghanistan. The Taliban reintroduces its white banner.