At least three people are dead and 50 others wounded after a bomb ripped through a Shia Muslim procession in central Pakistan, officials said.

Security was high on Thursday as the religious minority marked Ashura, the 10th day of the holy month of Muharram, a flashpoint for sectarian violence in previous years.

“We have confirmation of three dead and 50 injured from the blast at the procession site,” said a senior government official in the city of Bahawalnagar, in Punjab province.

Social media videos showed bleeding victims lying on a road being helped by members of the public.

“The nature of the explosion is not yet clear as a team is still collecting evidence from the scene,” he said.

Authorities have suspended mobile phone services in major cities as a security measure during Ashura processions. Residents in many urban centres were experiencing signal jams on Thursday. The streets leading to procession routes were also blocked.

Ashura commemorates the killing of the Prophet Mohammed’s grandson Hussein in the Battle of Karbala in 680 AD – a defining moment in the birth of Shia Islam.

The procession later resumed and people continued with the ceremonies, the officials said.

Sectarian violence – in particular by Sunni hardliners – against the Shia, who make up roughly 20 percent of Pakistan’s 220 million people, has erupted in fits and bursts for decades in Pakistan.

Anti-Shia armed groups have bombed shrines and targeted Ashura processions in attacks that have killed thousands.

Hussein is equally revered by Sunnis, but hardliners oppose the public mourning of his martyrdom. 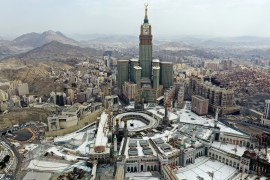 Islamic New Year: What you need to know

The upcoming Hijri new year marking the start of the Muslim lunar calendar will fall during the second week of August. 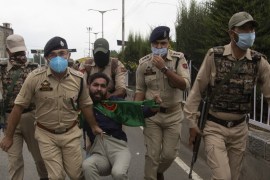 Why the Indian state is now scared of the Kashmiri Shia

Kashmiri Shia youth are negotiating their own space within the Kashmiri struggle. 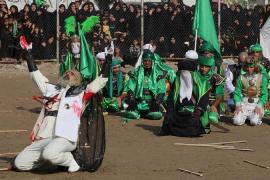 Ashura: A time for mourning

The Shia ceremony marking Imam Hussein’s death 1,333 years ago is also a time to remember those lost in recent battles. 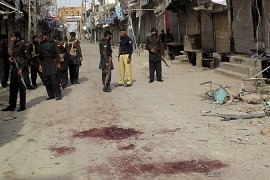