At least four Palestinian men have been shot dead during confrontations with the Israeli army in the Jenin refugee camp in the north of the occupied West Bank.

Saleh Mohammed Ammar, 19, and Raed Ziad Abu Seif, 21, were shot on Monday and died from their wounds shortly after arriving at the Jenin city hospital, according to a source at the health facility.

“Two citizens arrived at the emergency department, shot by the Israeli army, and died shortly afterwards, succumbing to their injuries,” a source at the hospital was quoted as saying by local media.

The bodies of the two other men, one identified as Noor Jarrar and the other as Amjad Iyad Azmi, were taken by Israeli forces, sources said.

Translation: Four young men were shot and killed by Israeli forces during armed clashes in the Jenin refugee camp at dawn today

The governor of Jenin confirmed the deaths.

At least two other Palestinians were arrested. One was shot in the hand and the other, identified as Mohammed Abu Zina, was taken from his home during the raid.

Meanwhile, funeral processions began for the slain men in the Jenin refugee camp.

Translation: Local sources: “The funeral of the martyrs who were shot dead by the occupation during the storming of Jenin camp at dawn begins”

Witnesses said a group of Palestinians engaged in clashes with members from the Israeli police’s Musta’ribeen – an undercover unit made up of Israelis disguised as Palestinians.

The unit’s agents usually embed themselves in Palestinian areas with the intention of arresting people. Maan reported the agents had been in the camp hours before Israeli forces stormed the area.

According to Maan, the Musta’ribeen agents opened fire “directly on a large group of young men” just as Israeli troops raided the camp.

The Israeli police said in a statement that soldiers shot at “attackers” after Palestinians opened fire at the army’s “undercover forces”.

None of the Israeli forces was wounded in the incident. They were reportedly on a mission to detain an individual, police said.

Senior Palestinian official Hussein Al Sheikh accused Israel of “a heinous crime” and tweeted “the international community should be ashamed of its silence about this and its failure to provide protection to the Palestinian people from this oppression”.

In recent weeks, there have been numerous clashes between Israelis and Palestinians in the northern occupied West Bank, mainly in Jenin and Beita.

Nearly half a million people live in illegal Israeli settlements in the occupied West Bank, alongside 2.8 million Palestinians.

Palestinians have staged near-daily protests in Beita since May to voice anger at a nearby illegal Israeli settler outpost.

The settlement was evacuated in early July but Israeli army troops remain stationed there while authorities deliberate on its fate. If the settlement is approved, its founders will be allowed to take up residence there more permanently.

Beita’s residents have vowed to continue their campaign until the army also leaves the outpost.

The occupied West Bank is part of the territory where a Palestinian state is envisaged under the two-state solution.

Israel occupied the West Bank during the 1967 War and all settlements there are considered illegal by most of the international community.

Israeli forces often carry out raids in various areas across the West Bank, where they detain, and often kill, Palestinians. 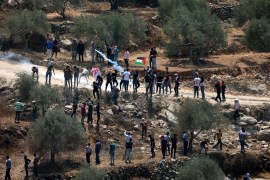 Imad Dweikat, 38, had been shot with ‘a live bullet to the chest’ in Beita, health ministry says. 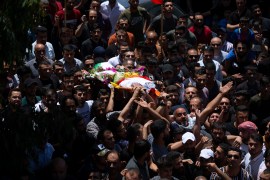 Israeli troops shoot dead Shawkat Awad, 20, during the funeral of a Palestinian boy killed by army fire the previous day 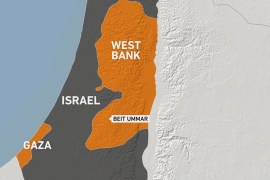 Mohammed al-Alami, 12, shot in the chest while travelling in a car with his father in West Bank, Palestinians say.