As the United States withdraws personnel from its embassy in Kabul amid the Taliban’s rapid advance on the Afghan capital, Secretary of State Antony Blinken has rejected comparisons to the US exit from Vietnam decades ago.

In a series of US media interviews on Sunday, Blinken again defended President Joe Biden’s decision to pull US troops out of Afghanistan by the end of August, despite mounting criticism that the swift US withdrawal contributed to the country’s deteriorating security situation.

“Remember, this is not Saigon,” Blinken told CNN, referring to the fall of Saigon in 1975 at the end of the Vietnam War. “We went to Afghanistan 20 years ago with one mission, and that mission was to deal with the folks who attacked us on 9/11 – and we have succeeded in that mission.”

A photo that immortalised the US’s defeat in Vietnam, showing evacuees boarding a helicopter on the roof of a building, spread fast on social networks after Washington said recently it would send some 3,000 US soldiers to help embassy staff leave Afghanistan.

PHOTO 1: US diplomat evacuate US from embassy via helicopter as the #Taliban enter #Kabul from all sides. #Afghanistan (2021)

PHOTO 2: US diplomat evacuate US from embassy via helicopter as the PAVN & Viet Cong capture of Saigon, Vietnam (1975) pic.twitter.com/YamWmzjOay

That deployment has since increased, with Biden announcing on Saturday that he had authorised a total of about 5,000 soldiers to help with the personnel drawdown.

Blinken on Sunday confirmed that as part of that ongoing effort, US personnel were being moved from the embassy compound in Kabul to a facility at the airport.

Diplomats were being ferried by helicopter to the airport, where US troops were providing security amid an exodus of Americans and their local allies and other foreigners. Sources told the Reuters news agency that most US staff were expected to be evacuated from Kabul in the next day or two.

“It’s why the president sent in a number of forces to make sure that, as we continue to draw down our diplomatic presence, we do it in a safe and orderly fashion and at the same time maintain a core diplomatic presence in Kabul,” Blinken said during an interview with ABC News.

The Pentagon authorised another 1,000 US troops to help with the evacuations, a US official said on Sunday, adding that the total number of troops now sat at 6,000. The soldiers will be from the 82nd Airborne Division, which had been on standby.

Al Jazeera’s Heidi Zhou-Castro, reporting from Washington, DC, said Blinken also warned the Taliban of a “swift and decisive response” should the group interfere with US personnel or the withdrawal.

Zhou-Castro said the comparisons to Saigon has been humiliating for the Biden administration, “particularly because the US seems to [have been] caught so flat-footed with President Biden saying just a week ago that there would not be helicopter evacuations off the rooftop of the embassy”.

“And now you are seeing damage control,” she said, referring to Blinken’s interviews on Sunday. She added that Republican lawmakers in the US have described the situation as “an utter disaster”, heaping more pressure on the Democratic president’s administration.

Republican Senate Minority Leader Mitch McConnell earlier this week blamed Biden for what he described as “a massive, predictable, and preventable disaster” unfolding in Afghanistan.

“President Biden’s decisions have us hurtling toward an even worse sequel to the humiliating fall of Saigon in 1975,” he said in a statement.

The Taliban’s rapid advance in recent weeks saw the group capture 26 of the country’s 34 provincial capitals. Afghan President Ashraf Ghani fled Afghanistan on Sunday as Taliban fighters had encircled Kabul, saying they would move further into the capital.

By evening, the Taliban said it had taken control of most of the districts around the outskirts of the city. Taliban fighters later entered the Afghan presidential palace, where the group’s leadership, surrounded by dozens of armed fighters, addressed the media.

The US embassy issued a security alert earlier on Sunday, warning that the situation at the airport was changing rapidly. “There are reports of the airport taking fire; therefore we are instructing US citizens to shelter in place,” it said.

A NATO official said the group was maintaining its diplomatic presence in Kabul and helping to keep the airport running. France, Germany and the Netherlands, all NATO members, said on Sunday they were moving their diplomats from their embassies, too.

Meanwhile, amid the US personnel withdrawal, observers have questioned whether the Biden administration is doing enough to help Afghans who helped the US during its decades-long military mission.

“What is astonishing is the utter lack of planning by the administration to develop and execute a plan to protect the tens of thousands of Afghan nationals who worked with our military,” said Ali Noorani, president and CEO of the US-based National Immigration Forum advocacy group.

In a statement on Sunday, Noorani called on the US to immediately evacuate as many Afghan applicants to a special US visa programme as possible, as well as “rally the international community to prepare for what will likely be a massive surge of Afghan refugees”.

On Saturday, Biden said the increased deployment of US troops would also help evacuate some Afghans going through the special visa programme.

The US president met with his national security team on Sunday by secure videoconference from the presidential retreat at Camp David to hear updates on evacuations and the security situation, a White House official said.

US Senate Majority Leader Chuck Schumer said at a news conference that the safety of US personnel and of Afghans who supported the Americans should be Washington’s top concern.

“Job number one is for us to bring back, first, all American personnel … But second, all of the brave Afghans who helped our military, they have to be provided an exit to come to America,” Schumer said. 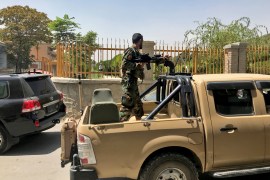 World reacts as Taliban closes in on Afghan capital 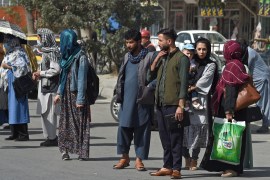 Taliban takeover: What we know so far

Taliban orders its fighters to enter Kabul as the US hastily evacuated diplomats from its embassy by helicopter. 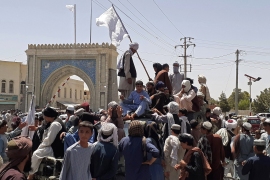 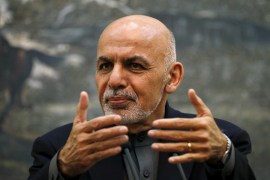