A man has been stabbed and a reporter attacked at a protest against COVID vaccines in Los Angeles after a fight broke out between anti-vaxxers and counter-protesters.

A handful of counter-protesters also gathered nearby, the Times said. About half an hour later, a brawl broke out between the two groups, though it was not immediately clear what prompted the confrontations.

The man was taken to a nearby hospital where he is in serious condition, LAPD Officer Mike Lopez said.

“No arrests have been made but investigation is on going,” the department said.

Counter-protesters could be seen spraying mace while members of the anti-vaccine rally screamed death threats, the Times reported.

KPCC radio reporter Frank Stolze was seen walking out of the park near City Hall being screamed at by anti-mask protesters. One man was seen kicking him.

According to the Times, Stolze told a police officer he was assaulted while trying to conduct an interview.

He later wrote on Twitter: “Something happened to me today that’s never happened in 30 yrs of reporting. In LA. ⁦@LAist⁩ I was shoved, kicked and my eyeglasses were ripped off of my face by a group of guys at a protest – outside City Hall during an anti-vax Recall ⁦@GavinNewsom⁩ Pro Trump rally.”

While there is no rule that requires people to get vaccinated in California, some cities – including New York – have required proof of vaccination from people who wish to enter certain spaces and businesses.

The rally was reportedly held to protest against a City Council vote that took place on Wednesday. The motion passed in favour of directing the city attorney to draft a decree on requiring people to be at least partially vaccinated against COVID-19 in order to access indoor public spaces.

Los Angeles City Council President Nury Martinez has pushed for such a move. She criticised Saturday’s violence in a tweet.

The Los Angeles Times quoted her as saying: “Not wearing a mask and being anti-vax isn’t patriotism – it’s stupidity.” 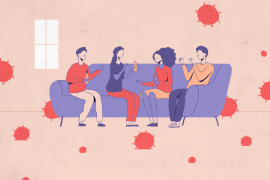 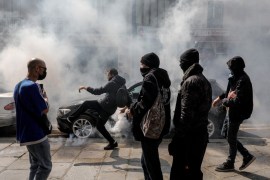 Protesters, many of them unmasked, are unhappy with vaccine mandate for health workers and health pass in public places. 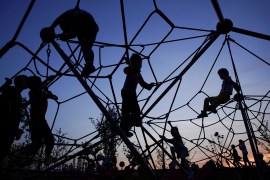 Vaccinating kids is critical and messaging is key, experts say

As the coronavirus vaccine roll out extends to children in the US, messaging is crucial to overcoming vaccine hesitancy.