At least 304 people have been killed after a magnitude 7.2 earthquake struck southwest Haiti, reducing buildings to rubble and sending terrified residents running out of their homes.

In a news conference on Saturday evening, the head of the country’s civil protection agency, Jerry Chandler, said 304 people had been confirmed dead – up from an initial toll of 29 – while at least 1,800 others were injured.

Chandler told reporters 160 of the deaths were reported in Haiti’s southern department; 42 were in Nippes; 100 were in Grand Anse, and two were in the country’s northwest.

“The first interventions, carried out both by professional rescuers and members of the population, made it possible to extract several people from the rubble. Hospitals continue to receive the wounded,” the agency also said on Twitter.

It is the latest crisis to befall the Caribbean nation, which is struggling amid widespread gang violence and ongoing political instability in the aftermath of the assassination of President Jovenel Moise last month.

“I saw bodies being pulled out of the rubble, injured and perhaps dead people,” said Les Cayes resident Jean Marie Simon, 38, who was at the market when the earthquake struck and ran home to see if his family was safe. “I heard cries of pain everywhere I passed through.”

Haiti’s new prime minister, Ariel Henry, declared a one-month state of emergency after what he described on Twitter as a “violent quake” and said he would mobilise all available government resources to help victims.

“We will make the necessary arrangements to assist those affected by the earthquake,” Henry tweeted. “The government will declare a state of emergency. We will act quickly.”

The USGS issued a tsunami warning, saying waves of up to 3 metres (nearly 10 feet) were possible along the coastline of Haiti, but it soon lifted the warning. Shocks were felt throughout Haiti and in neighbouring Caribbean countries.

“Lots of homes are destroyed, people are dead and some are at the hospital,” Christella Saint Hilaire, who lives near the epicentre, told the AFP news agency.

Residents shared images on social media of frantic efforts to pull people from the ruins of caved-in buildings while screaming bystanders sought safety in the streets outside their homes. “Houses and their surrounding walls have collapsed. The roof of the cathedral has fallen down,” resident Job Joseph told AFP from the hard-hit city of Jeremie on Haiti’s far western end.

Haiti, an impoverished country, is vulnerable to earthquakes and hurricanes.

“Today brings back the trauma of the 2010 earthquake that tore Haiti apart. This deadly quake has destroyed homes and infrastructure in some of Haiti’s most vulnerable and marginalised communities,” Angeline Annesteus, country director of ActionAid Haiti, said in a statement.

“Women and girls are already bearing the brunt of the multiple crises facing Haiti, including rising hunger, political instability and gang violence. The devastating fallout from this earthquake could push many more families into poverty and hunger,” Annesteus said.

The earthquake on Saturday struck more than a month after Moise was killed by a crew of mercenaries at his home in the capital, Port-au-Prince, sending a country already battling poverty, spiralling gang violence and COVID-19 into political chaos.

Jeremy Dupin, a journalist and filmmaker based in Port-au-Prince, told Al Jazeera that Haiti’s existing problems will severely undermine the response to the disaster.

“The epicentre is four hours’ drive away [from Port-au-Prince] and it is going to take a lot of time for support to arrive,” Dupin said. “Communications in some places are paralysed, and there are very limited electricity services in [the affected areas] right now,” he added.

He said footage on social media appears to show people trapped under rubble with no rescue teams on the ground. “In [affected] communities people are just trying to help each other, and it is a very upsetting situation right now,” he said.

US President Joe Biden approved “immediate” aid for Haiti on Saturday, a senior White House official said, and named the head of the US Agency for International Development (USAID), Samantha Power, to coordinate the effort.

But Haiti is still recovering from the 2010 earthquake.

More than 1.5 million Haitians were made homeless, leaving island authorities and the international humanitarian community with a colossal challenge in a country lacking a land registry or building codes.

Hôtel Le Manguier in Okay, #Haiti is "completely flattened" and it's owner, former Senator Gabriel Fortune, was reportedly in the building when the 7.2 earthquake struck the city earlier today. pic.twitter.com/tFhzGZgWio

The earthquake destroyed hundreds of thousands of homes, as well as administrative buildings and schools, not to mention 60 percent of Haiti’s healthcare system. The rebuilding of the country’s main hospital remains incomplete, and nongovernmental organisations have struggled to make up for the state’s many shortfalls.

Hospitals in the regions hardest hit by Saturday’s quake were already struggling to provide emergency care, with at least three in the municipalities of Pestel, Corailles and Roseaux totally full with patients, according to Chandler, the civil protection agency head.

“This country just never finds a break! Each year of mismanagement did not hurt but the cumulative effects made us vulnerable to everything,” said Haitian entrepreneur Marc Alain Boucicault on Twitter. “Its going to take years to fix things and we have not even started!”

Catholic priest Fredy Elie, who began working with the Mission in Haiti Congregation after the 2010 earthquake, told The Associated Press news agency that access to the affected area is hindered by criminal gangs and was pleading for help.

“It’s time to open the road to those who want to help … They need help from all of us,” Elie said.

In Port-au-Prince, residents traumatised by the 2010 earthquake rushed, screaming, into the streets and stayed there as the aftershocks rumbled on.

“In my neighbourhood, I heard people screaming. They were flying outside,” said resident Sephora Pierre Louis. “At least they know to go outside. In 2010, they didn’t know what to do. People are still outside in the street.”

Another resident of the capital, 34-year-old Naomi Verneus, said she was jolted awake by the earthquake, which shook her bed.

“I woke up and didn’t have time to put my shoes on. We lived the 2010 earthquake and all I could do was run. I later remembered my two kids and my mother were still inside. My neighbour went in and told them to get out. We ran to the street,” Verneus said. With little testing, hospital officials say it is difficult to know how accurate Haiti’s COVID statistics are. 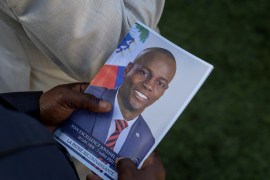 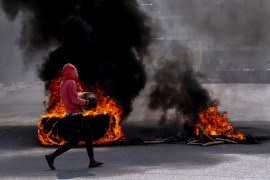