Kabul, Afghanistan – The Afghanistan government has made a power-sharing proposal to the Taliban in exchange for a halt in the escalating violence in the country, a top government source has told Al Jazeera.

The development, which was also reported in Afghanistan’s local media on Thursday, came as the armed group seized Ghazni, the 10th provincial capital to be captured in a week.

The source told Al Jazeera that the offer was presented to the Taliban indirectly through Qatar, which hosts the Taliban’s political office and the continuing Afghan peace talks.

However, the presidential palace in Kabul did not confirm the development, saying there has been no change in its plan while the peace talks are being held in Qatar’s capital, Doha.

Abdullah Abdullah, chairman of the High Council for National Reconciliation, is meeting with officials from the United States, China, Russia and Afghanistan’s regional neighbours in Doha.

On Thursday, Abdullah said the government’s peace plan has been shared with the Qatari government, without referring to the reported offer to the Taliban.

“We have presented our scheme to the host nation and you will also be provided with one,” Abdullah said at Thursday’s gathering with foreign diplomats.

The conflicting reports came as the Taliban claimed its 10th provincial capital, the city of Ghazni, about 150km south of Kabul.

Video of the provincial governor, Daoud Laghmani, fleeing was circulated online on Thursday. He was taken into custody when he reached Maidan Wardak province, which borders Kabul.

This isn’t the first time Laghmani has been at the centre of a controversy. Earlier in the summer, he was dispatched to Faryab province to serve as the governor there but he faced protests from local people, who said he did not represent them and could not speak the Uzbek language. Laghmani was re-appointed to the Ghazni governorship within weeks of his appointment to Faryab.

Last month, the Taliban said it would release its peace plan sometime in August, but the armed group has yet to announce it.

Instead, the past week has seen the group take 10 provinces in the south, west and north of the country, including Kunduz, which it had previously taken over in 2015 and 2016.

“The Taliban’s statements in Doha do not resemble their actions in Badakhshan, Ghazni, Helmand and Kandahar … Attempts to monopolise power through violence, fear and war will only lead to international isolation,” Ross Wilson, the US chargé d’affaires to Afghanistan, said in Doha. 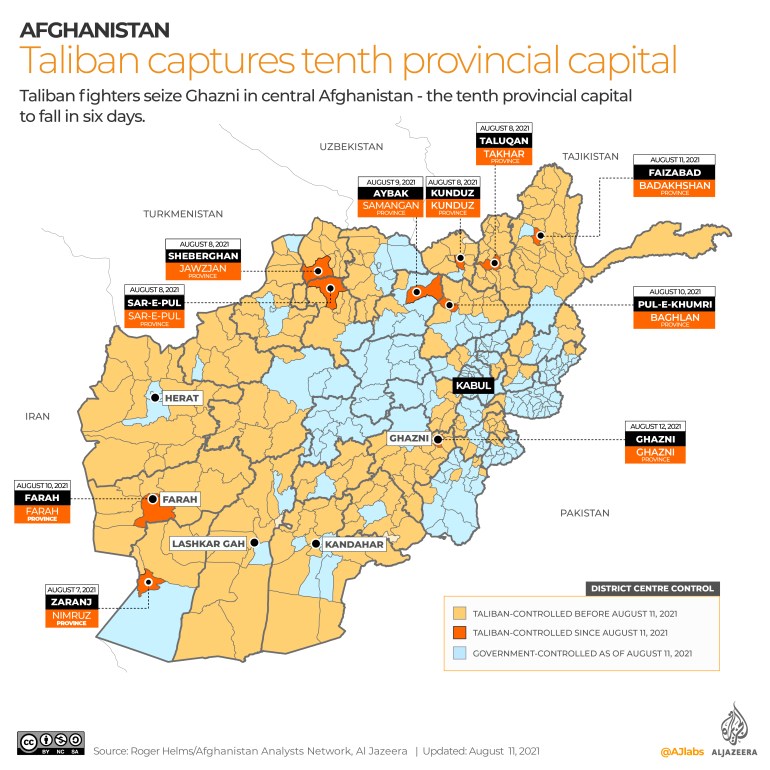