The Taliban could overrun Kabul, Afghanistan’s capital, within 90 days – sooner than originally thought – amid the withdrawal of US troops from the country, Reuters and the Washington Post report, citing a US intelligence assessment.

The group has captured nine provincial capitals in Afghanistan since Friday in a blistering military advance. The Taliban could isolate Kabul in 30 days, one official familiar with the assessment told Reuters.

A US official who spoke on the condition of anonymity told the Washington Post that “everything is moving in the wrong direction.”

Still, President Joe Biden said he does not regret the decision to pull American troops out of the country, stressing that Afghan forces must “fight for their nation”.

“Look, we spent over a trillion dollars over 20 years,” Biden said at a news conference on Tuesday. 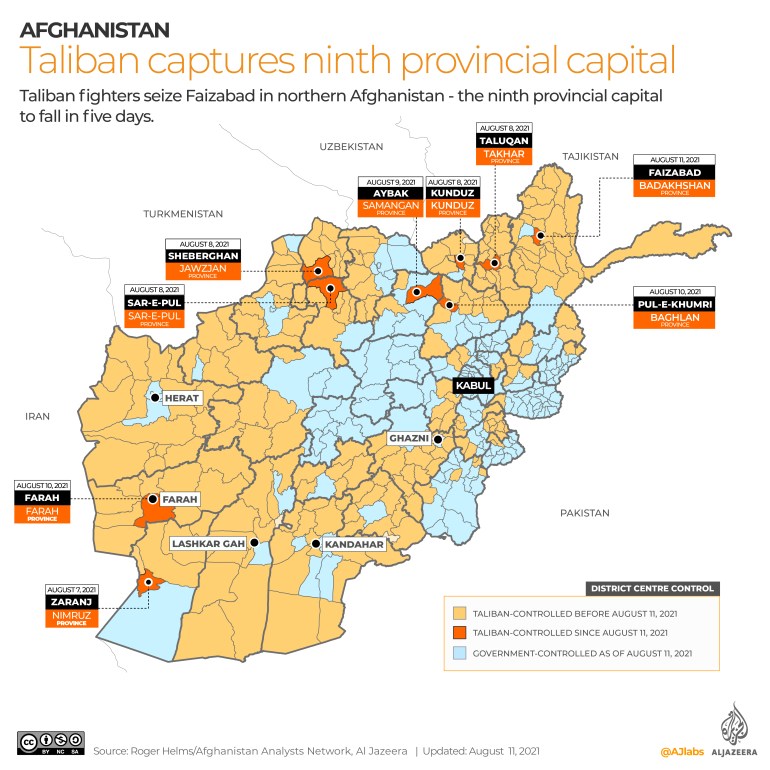 “We trained and equipped with modern equipment over 300,000 Afghan forces. And Afghan leaders have to come together. We lost thousands – lost to death and injury – thousands of American personnel.”

The evaluation that Kabul could fall to the Taliban so quickly is worse than initially feared. A previous intelligence assessment in June – revealed by several US media outlets – warned that the Afghan capital could be captured by the group in six months.

A US-led international coalition invaded Afghanistan in 2001 in response to the 9/11 attacks in New York and Washington. The Taliban, which controlled Kabul at the time, had harboured Osama bin Laden, the leader of al-Qaeda.

American and allied forces swiftly took control of Kabul and other major cities but struggled during the following two decades to defeat a rebellion by Taliban fighters.

Earlier this year, Biden pledged to withdraw all US combat troops from the country by the end of August to bring to an end what had become the US’s longest war.

On Tuesday, White House spokeswoman Jen Psaki said Biden had to make “difficult choices” on behalf of the American people.

“We went to Afghanistan to deliver justice to those who attacked us on September 11th, to disrupt terrorists seeking to use Afghanistan as a safe haven to attack the United States,” Psaki said. “We achieved those objectives some years ago.”

Despite the withdrawal, Washington had pledged to continue to support Afgan forces with air raids and logistic support, but it is not clear how involved the US military has been in the recent effort to resist Taliban advances.

“I’ll insist we continue to keep the commitments we made of providing close air support, making sure that their air force functions and is operable, resupplying their forces with food and equipment, and paying all their salaries,” Biden said on Tuesday. “But they’ve got to want to fight.”