An Iranian citizen accused of committing war crimes and murder during the final phase of the Iran-Iraq war in the 1980s has gone on trial in Sweden.

Hamid Noury has been in custody in Sweden for almost two years and is accused of having played a leading role in the alleged government-ordered execution of political prisoners at the Gohardasht prison in Karaj, Iran, in 1988.

His trial, which began in the Stockholm District Court on Tuesday, marks the first time anyone has been brought before a court to stand trial for the purge.

An estimated 5,000 political prisoners were allegedly executed across Iran at the end of its bloody conflict with neighbouring Iraq.

Under Swedish law, courts can try Swedish citizens and other nationals for crimes against international law committed abroad.

Noury, 60, has denied the accusations levelled against him. His trial is expected to run until April 2022.

According to Swedish authorities, Noury worked as a prosecution official at the Gohardasht prison when a large number of executions took place there between July 30 and August 16, 1988.

He is suspected of involvement in the execution of prisoners who belonged to or sympathised with the exiled People’s Mujahidin Organisation of Iran (MEK) opposition group, outlawed as a “terrorist” group by Iran, as well as the murder of other jailed dissidents.

The killings at the Gohardasht prison and elsewhere in Iran were allegedly ordered by the founder of the modern Islamic republic, Ayatollah Ruhollah Khomeini, after Iranian forces blunted a surprise 1988 assault by the MEK launched from Iraq.

Khomeini died in 1989, a decade after he led the Iranian Revolution that deposed Mohammad Reza Shah Pahlavi and birthed the Islamic Republic of Iran.

She then read out the names of 110 people whose executions Noury is accused of helping to orchestrate.

Raisi himself is under United States sanctions for his alleged involvement as one of four judges who oversaw the 1988 killings.

When questioned about the allegations after his election victory in June, Raisi said he had defended national security and human rights.

“If a judge, a prosecutor has defended the security of the people, he should be praised … I am proud to have defended human rights in every position I have held so far,” he said.

In a 2018 report, global rights watchdog Amnesty International put the number executed as part of the 1998 killings at 5,000 people, although it said that “the real number could be higher”.

Iran itself has never acknowledged the killings. 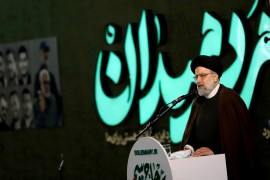 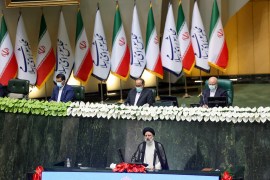 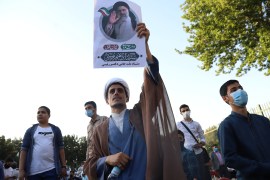 From managing an ailing economy to balancing ties with the West, Iran’s eighth president will not have an easy job.