Hundreds of commandos were deployed to the western city of Herat while authorities in the southern city of Lashkar Gah called for more troops to rein in the assaults on Sunday even as Afghan air strikes left scores dead on the streets, residents said.

At least five civilians were killed when a mortar shell struck a taxi in Afghanistan’s southern Kandahar province on Sunday, police said.

The incident took place in the outskirts of Kandahar city around noon amid clashes between the advancing Taliban and security forces.

Police spokesman Jamal Naser blamed the Taliban for the attack.

Fighting has surged across Afghanistan since early May when US-led foreign forces began a final withdrawal that is now almost complete.

Flights out of Kandahar, Afghanistan’s second-largest city and the Taliban’s former stronghold, were halted after three rockets fired by the Taliban struck the airport on Sunday before dawn.

Airport chief Massoud Pashtun said two of those rockets hit the runway and repairs were under way. An official at the civil aviation authority in the capital, Kabul confirmed the attack.

There were no immediate reports of casualties, the officials said.

“Kandahar airport was targeted by us because the enemy were using it as a centre to conduct air strikes against us,” Zabiullah Mujahid, a Taliban spokesperson, told Reuters news agency.

The facility is vital to providing the logistical and air support needed to keep the Taliban from overrunning the city, while also providing aerial cover for large tracts of southern Afghanistan.

Al Jazeera’s Charlotte Bellis, reporting from Kabul, said three major cities – Lashkar Gah, Kandahar and Herat – were under pressure from the Taliban at the moment.

“The Taliban has picked up a huge amount of rural territory in the last month and now they are putting the cities under a heap of pressure, and then they can take that leverage back to the negotiating table.”

In Lashkar Gah, Bellis said, the situation is “incredibly tense” amid heavy fighting, while communications have been shut off.

“We’ve heard from residents there that the Taliban are actually inside the city and we’ve seen videos of fires burning in the city – they’re fighting street to street in urban areas,” she said.

“Last night, we understand Afghan elite special forces dropped in by helicopter to try to push the Taliban out. We understand that the US is supporting the air raids, the Afghan air force is also supporting them.”

A resident who spoke to Al Jazeera before the communications shutdown said “everyone is hiding in their homes and that fighting is about 1km (0.6 miles) from the government compound in the centre of the city”, Bellis said. 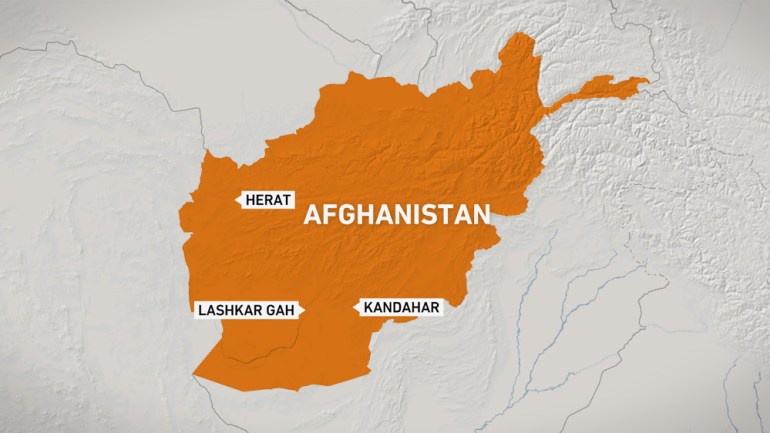 Afghan security forces have increasingly relied on air raids to push the fighters back from cities even as they run the risk of hitting civilians in heavily populated areas.

But Al Jazeera’s James Bays, reporting from Kabul, said there were still some civilian casualties.

He said Lashkar Gah’s main hospital run by Italian NGO called Emergency that has 98 beds was operating at over capacity in the last 24 hours.

“They have been treating people in makeshift beds as well, trying to deal with the influx of casualties,” he said.

“The city is in the worst condition. I do not know what will happen,” said Halim Karimi, a resident of Lashkar Gah.

“Neither the Taliban will have mercy on us, nor will the government will stop bombing.”

Further west, in the third-largest city of Herat, fighting continued on the city’s outskirts overnight.

Herat provincial governor’s spokesman Jailani Farhad said about 100 Taliban fighters had been killed in the attacks.

Both the Taliban and government forces have exaggerated claims of casualties inflicted on each other’s forces in the past and true counts are difficult to independently verify.

A government official told Al Jazeera that Afghan forces have employed air attacks to defend Herat and that the US is paying “close attention” to the situation in the province.

Musa, a member of a local volunteer fighter group known as an “uprising force” in the province, told Al Jazeera Herat residents are afraid.

“The Taliban continue to stage assassinations and launch grenades,” he said, which makes people afraid to move around a city that is considered one of Afghanistan’s economic and cultural hubs. Other residents said several markets in the city remain closed, as many people are too scared to venture outside.

“The situation is very difficult right now because of terror from the ‘inside’,” Musa said in reference to claims that supporters of the Taliban are providing the group information from within the city.