More than 100 wildfires have been brought under control in Turkey, according to officials, as firefighters worked to battle blazes that continued in popular seaside destinations.

Minister of Forestry and Agriculture Bekir Pakdemirli said on Twitter on Sunday that five fires were continuing in the tourist destinations of Antalya and Mugla, while 107 fires were “under control”.

Pakdemirli’s list showed fires began in 32 provinces from Wednesday onward. The wildfire death toll rose to eight on Sunday, with hundreds injured and thousands evacuated from their homes.

Seven people died in Antalya and one in Marmaris, Health Minister Fahrettin Koca said on Twitter on Sunday.

The fires in Antalya were in two districts while in Mugla, the tourist destination of Marmaris and others were hit by fire.

As some residents boarded boats to flee the danger, coast guard ships waited in the sea in case a bigger evacuation was needed.

Police water cannon assisted helicopters and fire trucks in a village in Bodrum, a popular district in Mugla that saw panic-struck tourists being evacuated from hotels on Saturday as fire rolled down the hill towards the sea.

Turkish television showed fires had reignited in the area after being extinguished earlier, with blazes and smoke approaching a village.

Civilians were trying to help, hoping to protect homes and olive groves, but some houses were already damaged. Coast guard and private boats were helping some residents evacuate by sea.

One hundred Russian tourists were also brought to safety from an eastern suburb of Bodrum, the Russian Consulate General said. They have been relocated to new hotels and were out of danger.

Residents of villages around Marmaris pleaded for more help on social media. Tourists and some residents were boarding boats with their suitcases as others waited anxiously to see if the fire would come down to the shore.

Fires were also encroaching on a village near the town of Manavgat in Antalya province, where helicopters were trying to extinguish blazes. 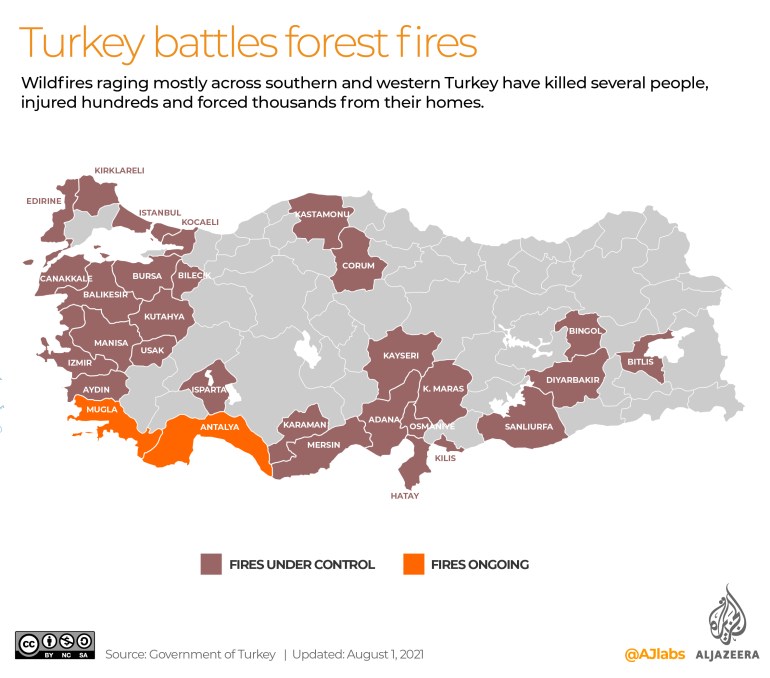 Another village in the province of Antalya also had to be evacuated on Sunday, broadcaster NTV reported.

The number of fire-fighting aircraft has been increased to 16 with the support of Russia, Iran and Ukraine, he said.

One fire in the coastal town Marmaris was caused by children, Erdogan said. Turkish authorities have begun an investigation into the cause of the other fires and have not ruled out arson.

While Turkish authorities are investigating whether the fires may have started as an act of “sabotage”, experts mostly point to the climate crisis, as seen by the drastic increases in temperatures along with accidents caused by people.

A heatwave across southern Europe has led to wildfires across the Mediterranean, including in Italy and Greece.

Temperatures in Turkey and nearby countries in southeast Europe are expected to climb to 42 degrees Celsius (more than 107 Fahrenheit) on Monday. Antalya was already registering 41C (106F) on Sunday.