Fast-moving Tropical Storm Elsa hit the New York City region with torrential rains and high winds as it churned up the East Coast on Friday with a tropical storm warning in effect from Southern New Jersey to Boston.

Maximum sustained winds from the storm peaked near 85 kph (50 mph) as it moved through New York City and Long Island, the National Hurricane Center (NHC) said in an 8am [1200 GMT] update.

Wind speeds had ticked down from overnight readings as high as 126 kph (78 mph) in coastal New Jersey that appeared to be “associated with nearby tornadoes”, the center reported.

The NHC showed a track leading up the US East Coast into the Gulf of Maine with gusty winds expected over portions of Atlantic Canada Friday night and Saturday. Flash flood watches are in effect for more than 40 million people.

Heavy rains were causing potential traffic hazards in New York City and nearby suburbs, which were already reeling from a deluge Thursday that flooded roads and at least one subway station. Up to 15 centimetres (6 inches) of rain was possible in some areas Friday.

The hurricane center said a tornado or two was possible through early afternoon Friday over parts of Long Island and southeastern New England.

The system was already blamed for one death in Florida on Wednesday. And Elsa also previously caused a damaging tornado in Georgia.

The hurricane center said rainfall totals between 5 to 10 centimetres (2 to 4 inches) were expected through Friday for eastern mid-Atlantic states and into New England. Isolated totals up to 15 centimetres (6 inches) were possible. There was a risk of considerable flash and urban flooding.

The tropical storm was expected to cross over the Northeast by the afternoon and move over Atlantic Canada by the night and Saturday. No significant change in strength was expected during the day, and Elsa is forecast to become a post-tropical cyclone by Friday night.

On Wednesday, nine people were injured in coastal Camden County, Georgia, when a tornado struck a campground for active-duty service members and military retirees. Eight of those hurt had to be taken to hospitals, Kings Bay Naval Submarine Base spokesperson Chris Tucker said.

The EF-2 tornado flipped over multiple RVs, throwing one of the overturned vehicles about 61 metres (200 feet) into a lake, the National Weather Service said in a preliminary report early Thursday after its employees surveyed the damage.

Authorities in Jacksonville, Florida, said one person was killed Wednesday when a tree fell and struck two cars. A spokesperson for the Naval Air Force Atlantic Office said Thursday that a sailor assigned to Patrol and Reconnaissance Squadron 16 in Jacksonville was killed.

In South Carolina, a Coast Guard Air Station Savannah crew rescued a family that became stranded Wednesday on Otter Island after their boat drifted off the beach. The group was flown to a hospital in good health, a Coast Guard news release said.

The National Weather Service in Morehead City, North Carolina, tweeted that a tornado was spotted near Fairfield on Thursday afternoon.

Scattered power outages were being reported along Elsa’s path Friday morning, with about 24,000 homes and businesses without electricity from Delaware to Massachusetts, according to the website poweroutages.us.

Elsa is the earliest fifth-named storm on record, said Brian McNoldy, a hurricane researcher at the University of Miami. 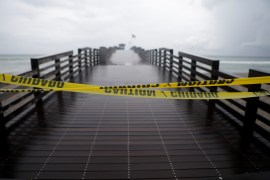 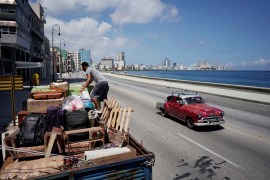 Tropical storm warning is in effect for parts of Cuba and Jamaica, as well as areas in the US state of Florida. 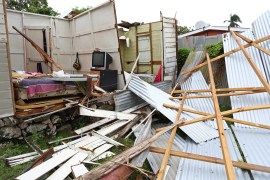 Deaths reported in the Dominican Republic and in St Lucia as Elsa weakens to a tropical storm. 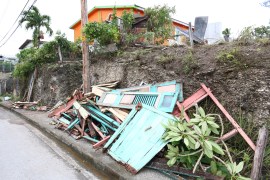 Hurricane Elsa heads to Haiti amid fears of floods and landslides

The storm already ripped off roofs, destroyed crops and downed trees and power lines in the eastern Caribbean on Friday.