Medan, Indonesia – Satria Krisnaditya Permana was busy preparing for the birth of his first child when COVID-19 hit his family.

Satria and his 24-year-old wife Sari Azalea Yuliani, who was 37 weeks pregnant and expecting a baby girl, tested positive for COVID-19 two weeks ago, shortly after Sari’s father was confirmed with the virus.

At first, all seemed well.

The couple, who regularly spent time with Sari’s father, elected to isolate at home in Bekasi, a satellite town on the outskirts of Jakarta, where they had everything they needed to hand.

Satria said she “started to drift in and out of consciousness” and a doctor told them the baby was in distress. Sari was admitted to Dr Esnawan Antariksa Air Force Hospital in Jakarta.

“It was absolute chaos,” Satria said. “There were people everywhere.”

Hospitals across Indonesia have been on the brink of collapse in recent weeks as the country’s total cases surged to more than two million cases amid a second wave of infections thought to have been caused by travel over the Eid al-Fitri holiday in May coupled with the arrival of the more aggressive Delta variant.

On Tuesday, more than 30,000 new cases were reported while more than 700 people died. Indonesia’s death toll is now more than 60,000 and there are growing concerns about the effect of the disease not only on pregnant women but babies and children.

Satria was relieved when his wife got a room at the air force hospital, but by June 30, her oxygen levels had plunged to 85 percent and doctors decided she needed an emergency caesarean section.

To protect her from COVID-19, Sari’s daughter was whisked away as soon as she was born and little Kirana Azalea Permana was placed in an incubator.

Satria was still isolating at home so he was unable to attend the birth. Two days later, just after Friday prayers, the devout Muslim received a phone call from the hospital.

“Keep praying, your wife is in a critical condition and on a ventilator,” a nurse told him. A few hours later, Sari was pronounced dead and hurriedly buried in Jakarta’s Rorotan COVID-19 Cemetery in line with coronavirus protocols.

“My wife never even got to see her own child properly,” said Satria. “She couldn’t breastfeed like she had planned. It was heartbreaking.”

But Satria did not even have time to grieve Sari’s death.

Baby Kirana had suffered from complications during the birth and needed to be admitted to a neonatal ICU for further treatment. But all of the NICUs in Jakarta and the surrounding areas were full. Satria’s parents desperately tried hospitals in Jakarta and its surrounding cities, before finally finding two hospitals that would take Kirana, one in Bandung and one in Cirebon.

On July 2, Kirana was rushed by ambulance to Bandung – the closer hospital but still a journey of about two hours.

Tragically, she died the next morning.

As baby Kirana had tested negative for coronavirus, the family were allowed to bury her in Bekasi near the family home.

“We tried so hard to save my daughter, but maybe it was too late,” Satria said. “She held on for three days in this cruel world. Now, the two of them are in heaven together.”

According to data from the Indonesian Obstetrics and Gynaecology Association (POGI), more than 500 pregnant women have tested positive for coronavirus in Indonesia since the pandemic began, with 4.5 percent needing treatment in intensive care.

About 3 percent died as a result of the disease.

Dr Wahyudi Gani, a gynaecologist and obstetrician at Stella Maris Hospital in the city of Medan in North Sumatra, says there are still many unknowns around how COVID-19 affects mothers and babies.

“Generally speaking, coronavirus is not more dangerous for pregnant mothers, but its effect on the foetus, both short term and long term, is still not well understood,” he told Al Jazeera.

POGI’s current recommendation is that the coronavirus vaccines are safe for women who are more than 12 weeks pregnant, but the government has not yet given mass vaccination for expectant women the go-ahead, according to Dr Wahyudi.

As a result, Sari had not been vaccinated for COVID-19, and neither had 42-year-old Rohmanita, who died in Medan on June 27.

Rohmanita and her husband Ricky Hidayat had been trying for a baby for five years, and Rohmanita was 38 weeks pregnant with the couple’s first child when she began to feel unwell.

“She got sick on 24 June and two days later she tested positive for coronavirus. She died at sunset the next day,” Ricky told Al Jazeera.

“It was so fast. We had been isolating at home because she was pregnant. Her due date was 10 days away, so we didn’t want to go to a hospital. I took care of her for four days before she died.”

Rohmanita, a housewife, was buried in line with coronavirus protocols at a special COVID-19 cemetery in Medan along with her unborn child. The health rules meant Ricky could not go to the graveside. Instead, he watched from a bluff overlooking the burial ground as the coffin was lowered into the ground.

According to grave digger Abdi, there are at least three other babies buried at the same cemetery, including a one-day-old, a one-month-old, and a three-month-old.

“Since the start of the pandemic, 14 children have died of coronavirus in Medan according to our records, aged between less than a month old and 15 years,” Dr Inke Nadia D Lubis, a paediatrician with the North Sumatra provincial COVID-19 task force told Al Jazeera.

“Some of them did not have any prior health conditions and some had underlying health issues. Children under the age of one are also obviously at a much higher risk if they contract the virus.”

According to data from the Indonesian Paediatric Society (IDAI), infections among children across Indonesia are rising at a higher rate than those of adults, perhaps due to more children being tested in recent months.

Cases of COVID-19 among teenagers and children under the age of 18 are continuing to rise week on week.

From June 28 to July 4, there were more than 11,000 children under 18 years old tested positive for COVID-19 compared with more than 7,000 the previous week according to IDAI data.

“At RSUI itself, the total number of inpatient and outpatient visits has increased. The number of outpatient paediatric patients at the COVID-19 polyclinic has at least doubled in recent weeks and we are seeing patients with more severe symptoms than before,” Dr Cynthia said.

She added that the symptoms of coronavirus in children appear to be different from adults.

Of the more than 2.3 million cases reported in Indonesia, more than 200,000 have involved under-18s with 30 percent of those cases involving babies born during the pandemic. To date, more than 600 children across Indonesia have died of COVID-19.

At the end of June, IDAI issued an official set of recommendations concerning COVID-19 vaccines for children and teenagers, recommending the government accelerate its vaccination programme for children.

Right now, the Indonesian government has approved vaccination for children and teens from the ages of 12-17, while a decision on the provision of COVID-19 vaccinations for children aged three to 11 years is still awaiting the outcome of further clinical studies.

“The provision of COVID-19 vaccinations for children should be welcomed,” said Dr Cynthia. “We hope that there will be no more hesitation, especially from parents to give vaccines to their children. With this vaccine recommendation, it is hoped that the coverage of COVID-19 vaccine immunisation will continue to increase so that it can reduce the rate of infection, morbidity and mortality of COVID-19 in children across the archipelago.”

At the cemetery in Medan, Ricky told Al Jazeera that he also hopes that people will start to take the pandemic more seriously. “People say there is no coronavirus. But coronavirus exists. I’ve seen it with my own eyes,” he said.

“It is clear to me that the government was not ready for this second wave,” he said. “I hope we can be more aware. This is very real. Some people think that this is all a conspiracy, but I can tell you that COVID-19 took away the love of my life and my daughter, too.”

Satria, who sells computer parts for a living, said that it was his wife’s dream for him to one day open a little store of his own.

“So, now, I will chase that dream for her. I still speak to her and tell her that she will be my eternal wife and that I will make her proud,” he said. “She held on as long as she could, and I know that she and my daughter are both smiling down on me from heaven now.”

“She would have been such a good mother.” 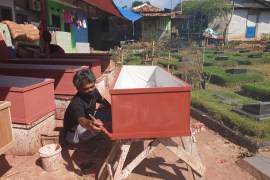 Government introduces restrictions to slow coronavirus transmission as hospitals and cemeteries fill up. 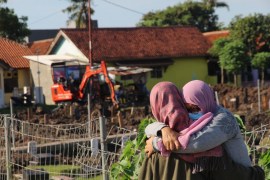 Indonesia to get US vaccine donations amid COVID emergency

US makes pledge to Indonesia as new cases, deaths surge with Jakarta predicting 100,000 active cases in the coming days. 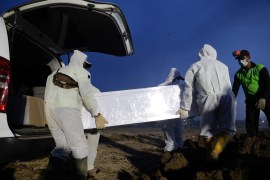 Indonesia ‘on edge of catastrophe’ as COVID lockdown looms 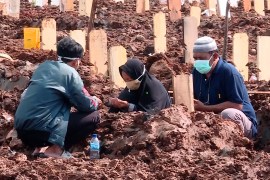 Families mourn in the mud as COVID surges in Indonesia

“She was healthy, her pregnancy was normal, and suddenly she’s gone.”