Prominent Dutch crime reporter Peter R de Vries is fighting for his life after he was shot on a central Amsterdam street on Tuesday, Dutch authorities said.

De Vries – famous in the Netherlands for exposing notorious criminals and speaking on behalf of crime victims – was shot in his head and body, witnesses told local media.

The attack has sent shockwaves through Dutch society, which has for years watched de Vries on TV handling – and solving – notable cases, including some of the most illustrious judicial errors in Dutch crime history.

The 64-year-old journalist and TV presenter was shot up to five times, police said, adding that three people were arrested, including a Polish and a Dutch national.

The third suspect has since been released.

In a statement on Twitter, de Vries’s son, Royce, said: “Yesterday our worst nightmare became reality. We as a family surround Peter with love and hope during this difficult phase. Much is still uncertain, but what is certain is that all expressions of support from all over the country now offer enormous support.”

While the motive remains unclear, de Vries has made considerable enemies over the years.

“Last year, de Vries acted as confidential counsellor for the crown witness in the trial against Ridouan Taghi, a prominent crime boss who was arrested in Dubai in 2019,” Wouter Laumans, a crime reporter with Dutch daily Het Parool, told Al Jazeera.

“With this, de Vries chose a camp in a very explosive underworld conflict in which many people have already been killed.”

Moroccan-born Taghi was wanted on international arrest warrants for murders and drug trafficking. The organisation he allegedly ran was linked to nine assassinations and several failed murder attempts, according to the Dutch media.

Security around the case is extra tight as in 2019, the state witness’s lawyer, Derk Wiersum, was gunned down in the street outside his house in south Amsterdam.

De Vries was shot at about 7:30pm local time (17:30 GMT) – still daylight at this time of year in Amsterdam – as he left a television studio after appearing on a talk show.

Het Parool quoted a resident as saying she heard five shots and went out to see what had happened. She said she saw de Vries lying on the ground with a lot of blood on his face.

She told the paper that he could not speak but was still alive, and that she held his hand as they waited for emergency services.

Prime Minister Mark Rutte said at a news conference in The Hague that the attack on de Vries was “shocking and inconceivable”.

“It’s an attack on a courageous journalist and by extension an attack on the freedom of the press, which is so essential for our democracy and rule of law,” he said.

In a statement, the Committee to Protect Journalists (CPJ) called on the Dutch authorities to “swiftly and thoroughly investigate the shooting”, and “determine if he was targeted for his work, and ensure that the attacker and the masterminds of the attack face justice”.

Tom Gibson, CPJ’s European Union representative, said “journalists in the EU must be able to investigate crime and corruption without fearing for their safety”.

Charles Michel, European Council President, said on Wednesday: “A crime has been committed against a journalist. It is a crime against our fundamental value of freedom of the press.”

Rutte and Justice Minister Ferdinand Grapperhaus met at the Dutch National Coordinator for Security and Counterterrorism (NCTV) on Wednesday evening to discuss the shooting.

“This is a black day, not only for the people close to Peter R de Vries, but also for the freedom of the press,” Grapperhaus told journalists.

“In the Netherlands, we want journalists to be able to conduct any investigation which must be carried out in complete freedom. This freedom has been seriously infringed this evening.”

Messages of solidarity flooded Dutch social media, including from the royal family, who posted on their official Facebook page that they were shocked by the news, and that de Vries and his loved ones were in their thoughts.

Willem-Alexander, King of the Netherlands, said: “Peter de Vries was of course a special journalist and this was an attack on journalism, the cornerstone of our constitutional state and therefore also an attack on the rule of law.”

No stranger to threats

In the past, de Vries had been given police protection after receiving threats related to his involvement in high-profile criminal cases as a reporter and as a witness in court.

One such case was the 1983 abduction of beer magnate Freddy Heineken. His book on the case was later made into a film starring Anthony Hopkins.

In 2016, de Vries filed a death threat complaint against one of the men involved in the kidnapping, notorious gangster Willem Holleeder.

He won an International Emmy for cracking the mystery of what happened to US teenager Natalee Holloway, who disappeared from the Caribbean island of Aruba in 2005. 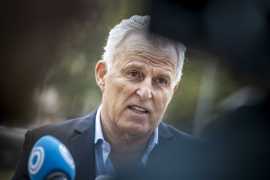 Journalist Peter R de Vries reportedly shot in the head by an unidentified gunman, according to Het Parool newspaper. 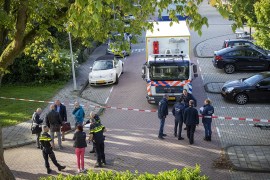 Derk Wiersum was the lawyer for Nabil Bakkali, a crown witness in a case against 16 men accused of five murders. 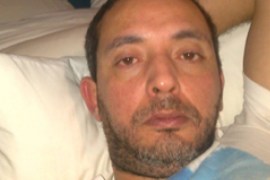 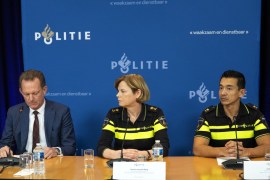 Police say 41-year-old, one of the most wanted men in the Netherlands, entered the UAE using a fake identity last year.