The Delta variant of SARS-CoV-2 has now been detected in more than 100 countries and in the coming months, it is expected to become the dominant strain globally, spreading quickly in countries with both low and high vaccination coverage, according to the head of the World Health Organization (WHO).

Delta, which was designated as a variant of concern in May, is believed to be the reason behind a vicious second wave of the virus in India, with daily new infections that month in the country exceeding 400,000.

Dozens of countries including South Africa, Bangladesh, Indonesia, Thailand have implemented new travel bans or tighter lockdown restrictions in an attempt to stop the spread of the virus.

The Delta variant was first detected in India in October 2020. By June 1, it had spread to 62 countries. Two weeks later, it had been found in 80 countries and by July 4, the number had risen to 104. Kazakhstan, Laos, Latvia, Lebanon, Namibia, Oman and Sierra Leone are the latest countries to confirm the presence of the Delta variant. 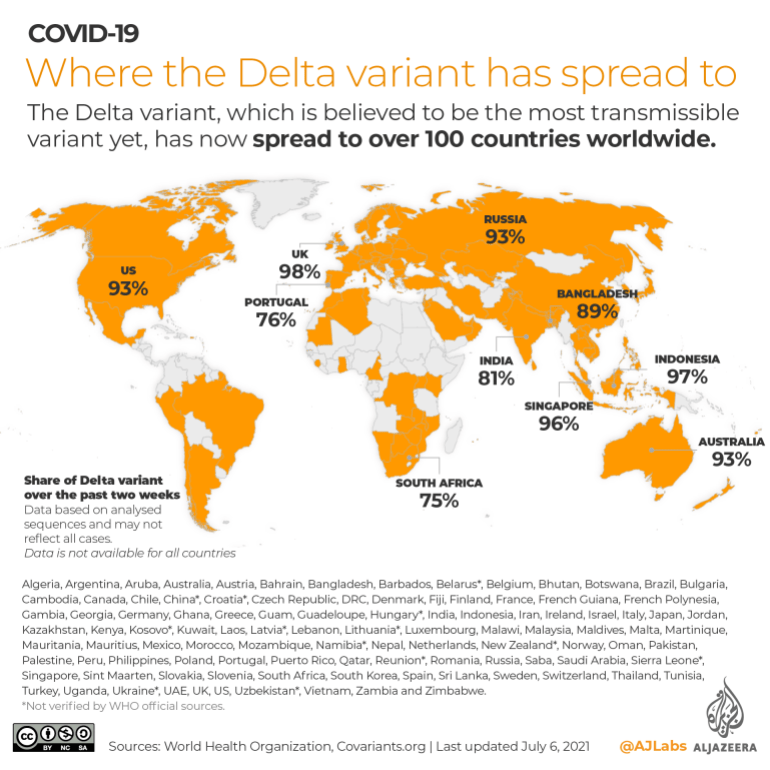 See an interactive version of the map above here:

*Not verified by WHO official sources.

Like all viruses, the SARS-CoV-2 coronavirus is evolving. Sometimes, these new variants emerge and then disappear. Other times, variations allow the virus to spread more easily and quickly which may lead to more cases of COVID-19. An increase in cases creates a greater strain on a country’s healthcare resources and may lead to more hospitalisations and deaths.

The WHO has identified four such variants of concern: Alpha, Beta, Gamma and Delta; and four variants of interest: Eta, Iota, Kappa and Lambda.

Among the four variants of concern, Delta is believed to be the most transmissible variant yet. The Delta variant is estimated to be between 40 and 60 percent more transmissible than the Alpha variant, which was first detected in the UK, according to a number of studies. 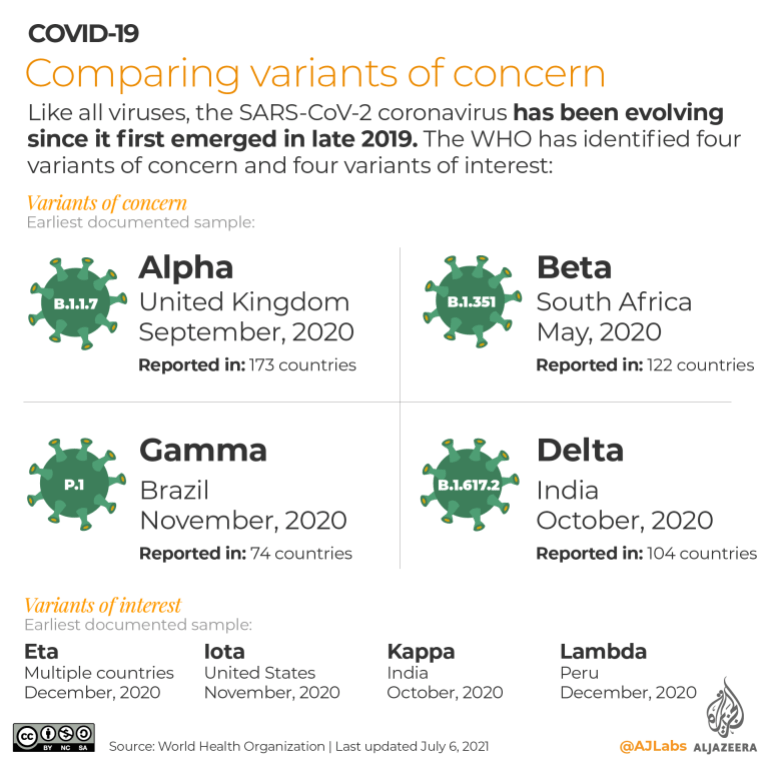 Reported in: 74 countries as of July 4

The WHO says more research data are needed to confirm if the Delta variant causes more severe cases than other known variants.

At the same time, it has urged governments to step up their inoculation drives and called on wealthy nations to ensure that vaccines are shared equitably to push back against the threat of COVID-19 surges.

“The good news is that all of the WHO emergency use listed vaccines do protect against developing severe disease, hospitalisation and death due to the Delta variant”, the health agency’s chief scientist, Dr Soumya Swaminathan, said this week.

Swaminathan added that “none of the vaccines that we have currently are 100 percent protective. So this is why even if you’re vaccinated, you can get the infection, but the chances are you will get very mild symptoms or no symptoms at all, and that the chances of getting seriously ill are really, really low.”