By David Child and Mansur Mirovalev

All 28 people on board a decades-old passenger plane that crashed in Russia’s far east, including at least one child, are feared dead, according to local officials and media.

The plane was en route from regional capital Petropavlovsk-Kamchatsky to Palana, a town in northwestern Kamchatka, when it lost contact with air traffic control shortly before 3pm local time (03:00 GMT) on Tuesday, Russia’s emergencies ministry said.

There were 22 passengers and six crew on board the Antonov An-26 twin-engined turboprop, which has been in operation since 1982.

Most were residents of Palana, a town which is home to about 2,900 people and near the Sea of Okhotsk.

Local officials said the plane’s debris had been found both in the sea and on land.

The cause of the crash is now “being investigated”, the Kamchatka transportation prosecutor’s office told Al Jazeera.

There were initial reports that poor visibility may have been a contributing factor.

An-26 plans have for decades been the most reliable mode of transportation in the remote and sparsely populated region, where “bears outnumber people”, according to a local saying.

Some 320,000 people live on the New Zealand-sized peninsula and an adjacent archipelago. After the Soviet collapse, the region faced a dramatic depopulation despite hefty natural resources, including oil and gas. 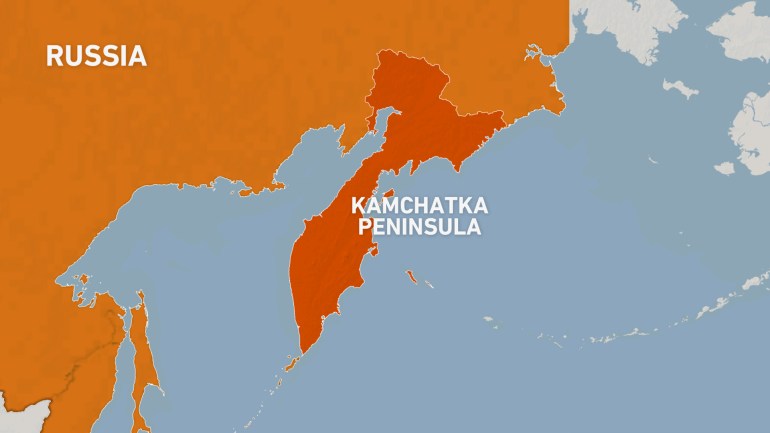 Aviation expert: ‘Too early to say what happened’

An aviation security analyst urged caution over any conclusions made before experts reach the crash site and examine the debris.

He said, however, that the An-26 plane was a reliable aircraft that can glide down safely, even if one of its turbines is off.

Kamchatka’s governor said the death toll from the crash would “most likely” be confirmed on Wednesday, with nightfall affecting search and rescue efforts in the area.

“The site is hard to access. It is dark here already. One can approach [the site] only by boat. Most likely, we will have an official confirmation only tomorrow,” Vladimir Solodov told the NTV television network.

Russia’s emergencies ministry released a photo that showed a team of rescuers scanning the search area while onboard a Mi-8 helicopter in Kamchatka.

The plane may have crashed into a seashore rock another plane had collided with nine years ago, the local Kamchatka-info publication reported, quoting emergency officials.

The rock, known as Pyatibratka (Of Five Brothers), is “notoriously” dangerous for landing planes, it said.

Another plane crashed into the rock in 2012 killing 10 people on board, including a three-year-old girl, and two crew. Four passengers survived.

An investigation into that incident found that some of the crew were drunk.

Debris scattered in sea and on land: Local official

Emergency workers located the plane’s scattered debris in the sea and on land, the Kamchatka governor said, adding that poor visibility may have caused the crash.

“An inspection from the air the aircraft’s debris were found: part of the fuselage on the seashore, part in the water and in the coastal area,” Vladimir Solodov said in a statement posted online.

The Kamchatka prosecutor’s office said that bad weather, malfunctioning equipment or a pilot’s error are among the possible causes of the crash.

“Unfavourable weather conditions, the aircraft’s malfunctioning equipment or a piloting error are currently investigated as possible causes,” it said in a statement.

No survivors from crash: Reports

Russian news agencies cited rescue officials as saying that there were no survivors from the wreckage of the plane, which was was thought to have crashed into a cliff as it was preparing to land in poor visibility conditions.

Russia’s civil aviation authority confirmed that the plane’s crash site had been found after the emergencies ministry dispatched a helicopter and had deployed teams on the ground to look for the missing aircraft.

Regional governor Vladimir Solodov told the Interfax news agency that the debris was found near the town of Palana, but did not specify whether it was located on land or in the sea.

“They found debris that is presumably the plane’s, and experts are going to the site to examine [it] and give a final conclusion about the debris’ origin,” Solodov was quoted as saying.

Debris of the missing An-26 was believed to have been found in Russia’s far east, Interfax reported, citing an unnamed source.

Anatoly Bannikov, deputy minister of transport and road construction, said: “The plane belongs to Kamchatka Aviation Enterprise whose director is Khrabrov Aleksey Vladimirovich. The plane has been in operation since 1982 and has a valid certificate of airworthiness. The crew has passed pre-flight examination. Search and rescue operations are being carried out now.”

Citing emergency ministry sources, Russian state news agency Tass reported that the search area was set within a radius of 15-25 kilometres (9-15 miles) around the Palana airport, with a focus on the Okhotsk Sea.

“The area has been roughly determined within 15-25 kilometres from the airport, along the coastline. A search is also under way at sea,” an emergency ministry source said.

“The objective data shows that the aircraft crashed into the sea,” the source added.

Kamchatka’s government published a list of 28 people who were on board the plane, including one child born in 2014.

It said that communication with the plane had been lost nine kilometres (5.5 miles) from Palana’s airport.

The weather in the area the plane was travelling through was cloudy at the time it went missing, Interfax reported, quoting the local meteorology centre.

The plane belonged to a company called Kamchatka Aviation Enterprise. The plane has been in operation since 1982, Tass reported. The company’s director, Alexei Khabarov, told the Interfax news agency that the plane was technically sound.

Russia’s RIA news agency reported that the plane had crashed into the sea off the Kamchatka Peninsula as it was preparing to land.

Local official among the missing

The head of the local government in Palana, Olga Mokhireva, was among the 22 passengers on board the plane, Russia’s TASS news agency quoted local authorities as saying.

Other reports citing local authorities said most passengers were from Palana – which has a population of about 3,000 people – including three other local government officials.